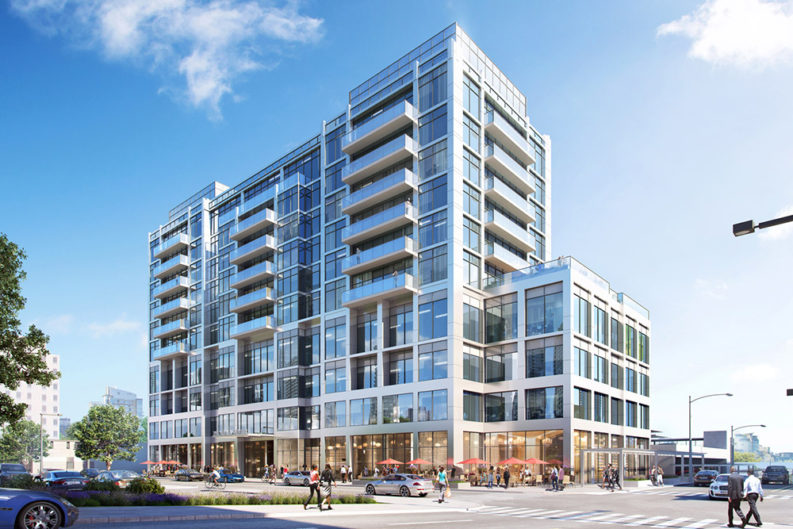 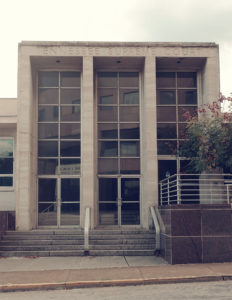 The city’s not talking, but developers are: Various proposals for reuse of a major downtown block range from a new hotel to a 10-story glass office and residential building with a park that fronts Henley Street.

Knoxville officials have kept a shroud over the initial process of selecting a firm to purchase and redevelop the 1.7-acre block between Locust and Henley streets anchored by the pink marble, 1950s-era, former state Supreme Court building. A five-person committee—the members of which the city will not identify—selected a proposal from Dover Development for further negotiation; it includes an Aloft Hotel, signature restaurant, and residential development on the site.

It’s an important block in the continued development of downtown, says Dawn Michelle Foster, city development director. She referred questions on details of the disposition of the property to the city purchasing department, which didn’t respond to a request for comment.

The city has declined to release any of the responses to its request for proposals for mixed-use development of the site, which it bought from the state last year for $2.47 million. But Dover and two of the other Knoxville firms—Marble Alley and Commercial and Investment Properties—released their visions for the block to the Mercury. (A fourth, Nashville-based BNA Associates, did not share its proposal.) Here’s what could be in store for the building’s future. 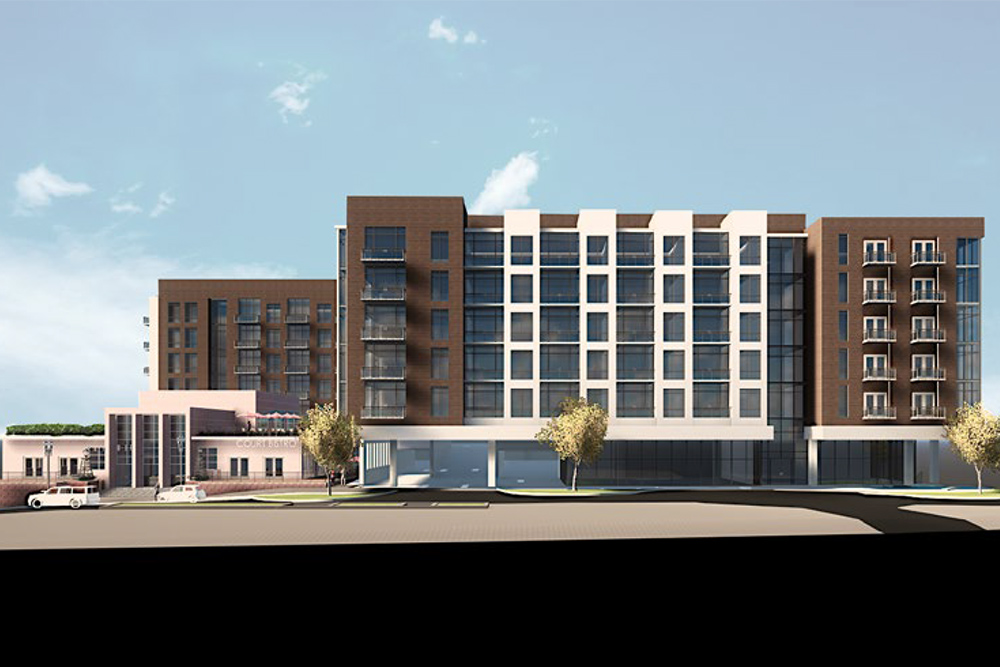 Dover Development’s plans for the former Tennessee Supreme Court building include renovation of the structure and property into a trendy Aloft Hotel and a 230-unit apartment community. Restaurateur Randy Burleson would operate a restaurant planned for the former court chambers, and PetSafe would open an animal-daycare site. The building would provide free office space for nonprofit Legacy Parks, and feature solar power and other clean-energy features developed with assistance from Oak Ridge National Laboratory. The site would also include 8,000 square feet of flexible meeting space.

The 527,000-square-foot development would represent an investment of $82.8 million, says Rick Dover, general manager of Dover Development, in a letter to the city that accompanied his proposal for the property. Dover declined additional comment for this story.

Knoxville Supreme Court LLC, an equal partnership between Dover and Bristol Development Group, based in Nashville, would undertake the project. Design Innovation Architects Inc. of Knoxville would design the development.

“Our proposal will enhance downtown with a new and sophisticated upscale hotel, new highly-amenitized urban residences, an exciting restaurant concept, a bike shop, pet daycare and other amenities,” Dover says in his proposal packet. “It will be accessible, attractive, and a point of pride for those who enter downtown. It will help downtown grow to the west, be accessible from all sides, and add amenities not currently available downtown.”

According to a press release from the city, officials will negotiate with Dover “with the intent of reaching an agreement to submit for City Council approval sometime in early 2017.” To maintain the integrity of the purchasing process, details of the submitted proposals are not publicly available until a contract is submitted to City Council.

“The City’s intent has been to direct the scope and intensity of the redevelopment of the strategically important block, then to return the property to private ownership as quickly as possible,” says the city’s press release.

Dover Development this fall entered into an agreement with the city to renovate the South High building in South Knoxville; is currently renovating the Farragut Hotel downtown; and is proceeding with renovations of the old Knoxville High Building. Dover in June also announced his plans for a $9 million investment to turn the upper levels of downtown’s old Pryor-Brown parking garage into 30 residential units that will be packaged with retail storefront. 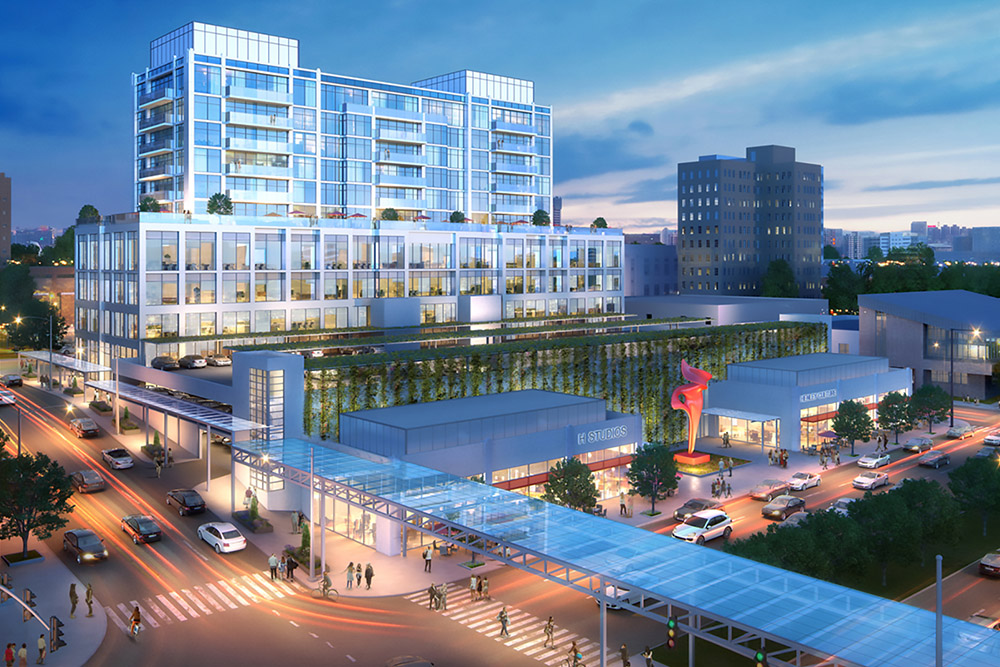 Commercial and Investment Properties proposed the $52.7 million Henley Center, a 10-story glass and concrete tower with both a 450-space parking garage and residential and office space. The original court house would not be saved.

Nick Cazana, CIP president, says the city informed him via letter that his proposal was the second choice. His $52.7 million vision is the Henley Center, a 10-story glass and concrete tower with a 450-space parking garage, and residential and office space, which he says the city center needs. The courthouse would only be preserved in small vestiges, such as use of the marble in the interior. Should negotiations with Dover not succeed, Henley Center would be next in line, he says.

The winning proposal, Cazana says, will be more than a cog connecting downtown with the University of Tennessee and busy Henley Street.

“This is the best site in downtown Knoxville,” says Cazana, owner of the Holiday Inn across Henley Street. “This is the most significant development in Knoxville since the convention center,” finished in 2002. His company is also building the Tennessean, an upscale hotel adjacent to the Holiday Inn expected to open in April 2017.

Cazana says his proposal is similar to a project he floated for the site around 2008, but that plan collapsed in the Great Recession. One difference is a lack of a hotel. Cazana is convinced that modern, environmentally friendly office space is a greater need for downtown, and he says he already has verbal commitments from one company to occupy 20,000 square feet of the 75,000-square-foot office building. The complex could accommodate 500 workers.

“What we’re looking at is an economic development play for Knoxville,” says Justin Cazana, principal with real-estate firm Avison-Young, which would handle Henley Center leasing for CIP.

The Henley Center would also include 70 residences on its upper six floors and a rooftop garden and restaurant on the fourth floor. The proposal calls for more than 25,000 square feet of retail space—some fronted, along with a park, on Henley. The project would also include a 450-space parking garage that could be utilized as parking for the convention center, which Cazana called “a dire need.” A street-level covered pedestrian walkway would provide direct access to the convention center.

Meanwhile, Marble Alley wants to develop the northern side of the property into a 150-unit residential development called the Chambers Residences, which would include some storefront space and be similar to the company’s eponymous apartment building downtown, says Buzz Goss, Marble Alley president.

“The presence of that many new residents in an area of downtown with few should aid significantly in the development of future, additional retail and services business in this sector of downtown,” the company says in its proposal to the city.

The court chambers and surrounding office space would be donated for use as a science, technology, math (STEM) center and demonstration laboratory.

“The vision is to have strong engagement between local industries and the facility to enable education and training regarding local manufacturing needs,” Marble Alley says in its proposal, referencing the proposed East Tennessee STEM Center.

“Examples can include composites, additive manufacturing, robotics… By being centrally located in Knoxville, the facility can service industries from around East Tennessee. The close proximity to the University of Tennessee could likewise serve as a recruiting ground for UTK and Tennessee Tech. As the capabilities expand, the facility could serve as a satellite manufacturing lab for UTK.”

Finally, BNA, of Nashville, submitted a proposal for a mixed-use project with 233 apartments, a 375-car garage, and 15,000 square feet of retail space. The design utilizes Dallas, Texas based Humphrey & Partners Architects e-urban program.

Whichever plan is selected, all are pending City Council approval of the proposal and ultimate sale of the property.

The city this week stood by its refusal to release information on the proposals despite the fact they had been released by the firms.

“Again, once a contract is prepared and sent to City Council, all of this information—the proposals, who served on the internal committee, any supporting documentation—it all becomes public,” city spokesperson Eric Vreeland says in an email. “It’s not available now, because cities are careful in protecting the integrity of their procurement processes during the negotiation stages. Cities want to allow independent evaluation of proposals, without any lobbying by any parties of the committee members. The firms that submit proposals sign affidavits, swearing that they will not contact City representatives or Council members to pitch their project(s).”

“Bring it to me with a bow on it at the end, and my job is to determine whether that’s the best use,” he says. “We’ve got plenty of time to look at it.”

“Their track records speaks to their success,” he says.