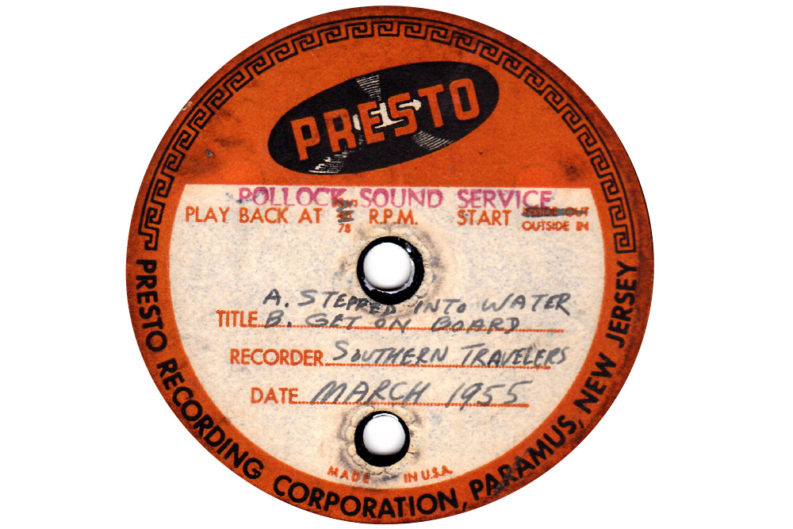 Acetate discs have been around since the 1930s. They were a relatively inexpensive and easy way to record before magnetic tape was invented. A thin sheet of cardboard, glass, or most often aluminum, is coated with a lacquer in which the grooves of the record are cut. Acetates are designed for only a few plays—they have a lot of surface noise, which increases with each play, and after time the lacquer starts to flake.

They’re not the ideal medium for reproducing sound, but for a time they were one of the best methods for recording outside of an expensive studio. (You really don’t want to mess with wire recording.) Some of the most interesting and culturally significant items at the Tennessee Archive of Moving Image and Sound are acetate discs. The archive’s collection of acetate recordings by Arthur Q. Smith and other country musicians covering his songs were the impetus behind The Trouble With the Truth, the German archive label Bear Family’s recent two-CD retrospective of the overlooked Knoxville songwriter.

Given how vulnerable the discs can be, it’s surprising how many continue to turn up. We’ve recently acquired a few other intriguing acetates. Will Cantrell called up to tell us he’d bought a batch of 78s from an antique store, including two acetate discs recorded in Knoxville. The performances were by a barbershop quartet, music he doesn’t particularly care for, and he wondered if we’d be interested in them. We’re always interested in old records recorded in Knoxville, and these turned out to have unexpected historical significance.

The two 10-inch 78 rpm records were in fairly good shape. They don’t appear to have been played much. They bore labels that read “City Recording Studio, 710 Henley St.” I searched for information on the studio in Paper to Pixels’ News Sentinel archive and found only one mention, an almost quarter-page ad on page 12 of the June 1, 1947, issue.

“Announcing the formal opening of City Recording Studio, 710 Henley Street between Church and Cumberland, Knoxville’s First Professional Recording Studio.” It advertises professional equipment, sound-treated studios, and master recordings. The studio was operated by Carlton W. Dobbs, who ran City Radio Sales and Service out of the same location. Today, most of that block is a parking lot, but at the time, Dobbs’ businesses shared a building with a real estate agent, painting contractor, and apartments.

There had been previous professional recording sessions in town, most notably when the Brunswick-Vocalion company hauled recording equipment from Chicago via railroad to set up shop at the WNOX studios in the St. James hotel in 1929-30. But that was never meant to be permanent. The number of pre-1947 acetates that survive suggest there was a good deal of recording going on around town, but most appear to have been recorded on primitive equipment in homes and radio studios. So this most likely was Knoxville’s first professional recording studio.

It doesn’t appear to have lasted long. The 1948 city directory lists City Radio Sales and Service, but the recording studio has already disappeared. This might help explain why we haven’t come across any recordings made there before now, or at least any with their label. There are some acetates without labels, so we don’t know the artists or locations.

As for the barbershop quartet, no names are listed, just the song titles: “Bill Bailey,” “Blue Heaven,” “Rainy Night in Rio,” and “My Happiness.” The latter was the first song recorded by Elvis Presley, to an acetate disc, at the Memphis Recording Service, in 1953, as a birthday present for his mother. The barbershop-quartet recording is fine, but I don’t think any of its members went on to greater fame. The names of one local barbershop quartet are listed in a 1947 News Sentinel article about a Bearden PTA meeting. If you’ve heard talk of Dr. J.C. Miller, Joe Tapp, Hilton Smith, or Jim Lockett recording a couple of records, do get in touch.

TAMIS cofounder Bradley Reeves continues to drop off recordings and films he finds out there. He recently uncovered two acetates recorded by the black gospel quartet the Southern Travelers. The records were cut at Pollock Sound Service in Oak Ridge, run by William Pollock, co-owner of the Music Box record store.

Each side has two songs, all recorded in March 1955, presumably at one session. They’re evenly divided between slower hymns and faster-paced, upbeat songs, and though the records have a lot of scratches and surface noise, they still impress. “Get on Board,” in particular, features deft vocal interplay. It’s an excellent showcase for each member’s abilities.

There are several mentions of the Southern Travelers in the News Sentinel throughout the 1950s and ’60s, announcements of them appearing with other performers, such as God’s Gospel Singers, a group that included 1930 Vocalion recording session veteran Eugene Ballinger. They then disappear until the 1990s, when some of the Southern Travelers begin appearing in obituaries. Theotis Robinson Sr., who died in 1992, is the first. In 2009-10, three more obituaries appeared, for the Rev. Dexter Lee Jordon, Milton E. Hodges, and Lewis Logan. All were members of other gospel quartets, Logan in the famous Swan Silvertones, so their voices continue to live on in other recordings.