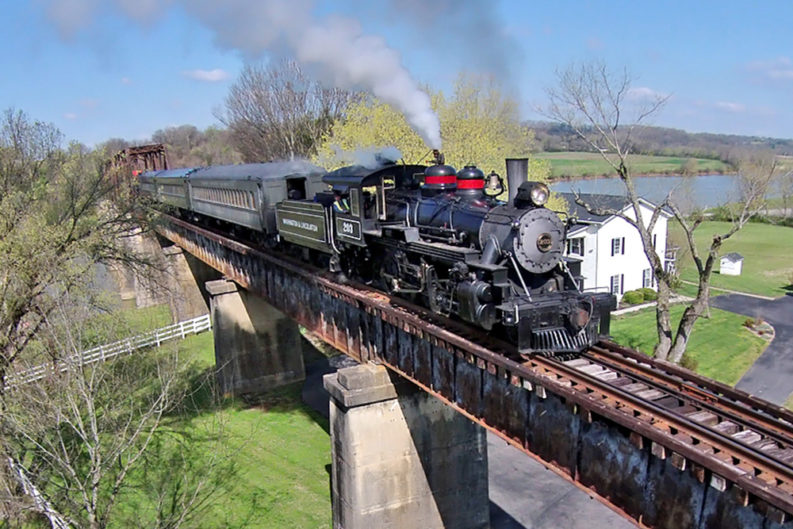 The Three Rivers Rambler is an excursion coal-fired steam train that travels along the northern shore of the Tennessee River.

It’s named for the fact that on this short trip, about six miles each way, you can see three rivers: the Tennessee, of course, which flows through Knoxville, and the two rivers that flow together to form it, the Holston and the French Broad. The Holston originates in southwestern Virginia and flows through Kingsport and Jefferson City before arriving here. The French Broad originates in North Carolina, and flows through Asheville and Newport before reaching Knox County.

The place where they flow together is called Forks of the River. The Three Rivers Rambler travels there, and on a high trestle near the end of the trip the train offers a perfect view of the confluence of the Holston and the French Broad, where they become the Tennessee River.

Except for the Rambler and rare excursion trains, Knoxville has no passenger service. However, the city had regular passenger service for 115 years, from 1855 to 1970. For most of that time, it was easy to get to most America’s major cities by rail. For about 25 years after the Civil War, downtown Knoxville hosted the headquarters of one of the South’s most important railroads, the East Tennessee, Virginia, and Georgia. That era ended in 1894, when New York financier J.P. Morgan bought it and made it a central part of the new Southern Railway. Although Knoxville was no longer an administrative center after that, the railroad industry, especially creating and repairing train cars, remained a major part of Knoxville business for most of the 20th century.

At one time as many as 30 passenger trains stopped in Knoxville daily, at all hours of the day and night. A century ago, it was easy to get to most major cities in America by rail. Many famous people arrived in Knoxville by rail, including Buffalo Bill, P.T. Barnum, King Paul and Queen Frederica of Greece, and at least six U.S. presidents, including Teddy Roosevelt and Woodrow Wilson. William Jennings Bryan’s funeral train stopped in Knoxville long enough for thousands to pay respects.

The Three Rivers Rambler evokes that era, and makes for an unusual tour into Knoxville’s past. It starts at its own station at University Commons near Kingston Pike. The two-year-old station is built to look just like a historic small-town railroad depot. From there the train chugs south toward the river, where it goes by several UT athletic fields and stadiums—including, of course, famous Neyland Stadium and Shields-Watkins Field, which just celebrated its 95th anniversary—and beneath river-spanning trestles for both CSX and Norfolk Southern freight lines. Then it rolls beneath the historic Henley and Gay Street bridges. The Gay Street Bridge was built in 1898, before automobiles arrived in Knoxville. The train passes Volunteer Landing Marina and the Rambler’s steam-engine house, where the train regularly refills with water for its steam engine.

As the train proceeds east from downtown, you’ll see the Ned McWherter / Riverside Landing Park, which connects to bicycle greenways. Later, the train passes the Mark Whitaker Water Treatment Plant, an almost castle-like building from 1927 most Knoxvillians never see. Then the Rambler rambles through farmland, including the 200-year-old George McNutt farm, and then the climax of the trip, the origin of the 652-mile-long Tennessee River, seen from a rare spot where all three rivers—the Tennessee, the Holston, and the French Broad—are visible at once. Historic sites Gilliam’s Station, named for a 1780s settler, and Lebanon-in-the-Forks cemetery, Knox County’s oldest graveyard, are also visible from the train. This is the spot where the first steam-driven riverboat to navigate the whole Tennessee River, the Atlas, stopped in 1828, proving it could be done.

This holiday season, the Three Rivers Rambler is called the “Christmas Lantern Express.” On several trips between now and Christmas, the ride features readings from the children’s book. The Christmas Lantern, by Karen Bishop. Call 865-524-9411 for reservations, or check threeriversrambler.com for more information.

Featured Photo: The Three Rivers Rambler’s course takes it over an elevated trestle that offers a surprising view of the confluence of the Holston and French Broad Rivers, where they join to form the Tennessee. Image courtesy of Three Rivers Rambler.

The Knoxville History Project now has a website! See knoxvillehistoryproject.org. Have a look, and use it to make a donation to help sponsor this educational page in the Knoxville Mercury into 2017!