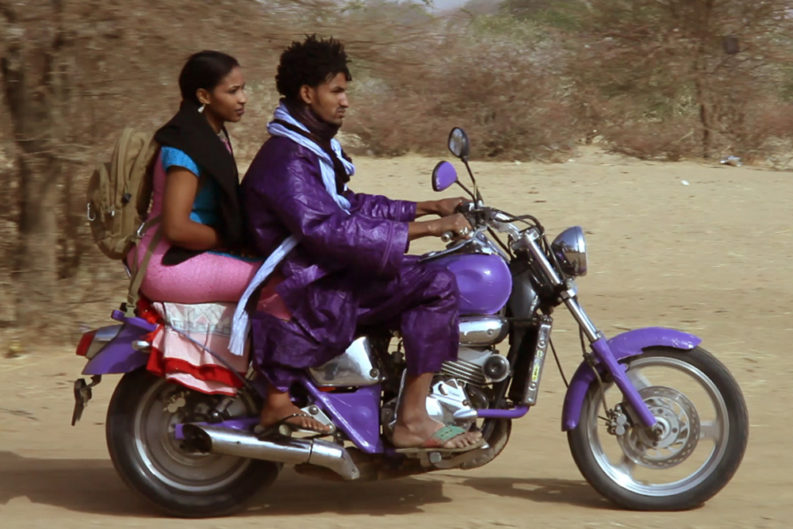 He’s the new kid in town. He’s got music in his soul. His father disapproves, because that ilk never amounts to anything. But there’s this one special girl. And a smirking rival. And a big showdown where the stakes far outweigh any trophy or prize.

Cliché, cliché, cliché, cliché, cliché, cliché. These tropes could be cut and pasted out of and into any one of hundreds of movies over the past 80 or 90 years. The bulk of them, assembled in the Minneapolis music scene in the early ’80s, form the basic story line of Purple Rain, a film that transcended its narrative limitations with star-power charisma and epochal musical performances. Transpose them to a dusty desert city in contemporary Niger and you’ve got Rain the Color Blue With a Little Red in It, a desert-nomad homage to Prince’s cinematic breakout that fails to rise above an amiable curiosity.

There’s no attempt to disguise the story’s roots, despite its unique setting. Mdou (Mdou Moctar, playing a version of himself), sporting purple robes, tools around town astride a motorcycle swaddled in purple tape. He’s already made a name for himself as a guitarist and performer through sound files passed around virally via cellphone (the Saharan equivalent of iTunes), but he makes a local splash by sitting in with a band and flooring all present with his fluid six-string lines and impassioned singing. He soon stumbles across his Apollonia stand-in, the comely Rhaicha (Rhaicha Ibrahim), and encounters his Morris Day-esque rival, Kader (Kader Tanoutanoute), an established guitarist and bandleader with a thing for flowing white shirts and a lock on scene props. Mdou sets out to prevail, through challenges and humblings, despite the fact that he has to hide his guitar from his dad (Abdoulaye Souleymane).

The setting lends Rain the Color Blue an undeniable vibrance. In Tamashek, the language of Tuareg nomads like Mdou, there’s no word for the color purple, which explains the film’s convoluted title. City-dwelling Tuareg may have left behind camels for motorcycles, but they still retain much of their culture, represented here by passionate ballads, desert picnics, and glasses of tea heated over coals at every occasion. Yet the characters, and their motives and worries, are undeniably familiar.

In a serendipitous touch, Mdou is left-handed, which doubles as a symbol of his otherness as a newcomer. It also allows the scheming Kader to humiliate him during an impromptu al fresco guitar pull: The hot new picker in town can barely plunk away at an instrument strung for a righty. He gigs with a restrung right-handed instrument, but a rare left-handed electric hanging in a shop serves as a symbol of his aspiration, and as a handy (and easily spotted) plot device.

It’s hard not to root for the film, and for its hero, especially since they’re both so clearly sincere. But Rain the Color Blue remains an unoriginal low-budget drama helmed by a relatively green director (Christopher Kirkley, who runs the Sahel Sounds record label) leading an inexperienced cast. Moctar, Ibrahim, and Tanoutanoute all flash moments of charisma, but accomplished actors they are not. The story—credited to Kirkley, cinematographer Jerome Fino, and Moctar himself—features a few deft plot points, but it never eludes roteness. Searching for a word to describe the visual style here arrives at “functional.” Mdou’s half-dozen or so sinuous musical performances highlight the film in every way, but if you’re looking for a Maghreb “Let’s Go Crazy,” you won’t find it. The idea of Rain the Color Blue is more compelling than the reality.

The Public Cinema will screen Rain the Color Blue With a Little Red in It at Scruffy City Hall (32 Market Square) on Wednesday, Dec. 14, at 8 p.m. Admission is free.