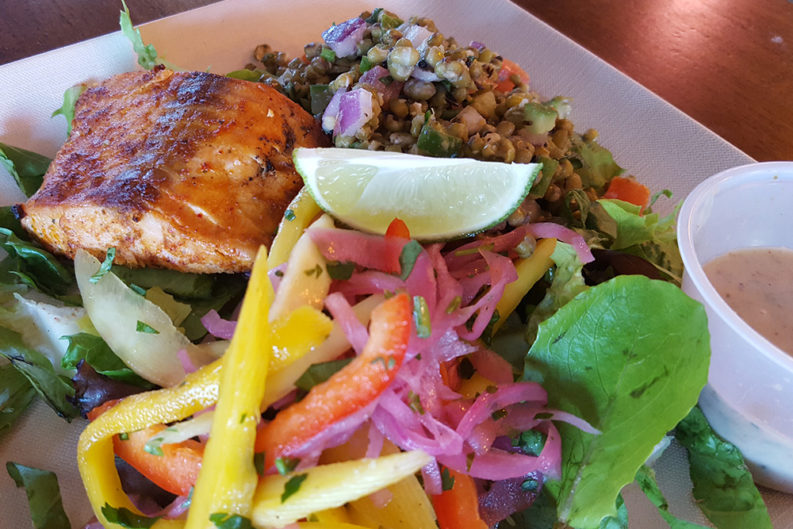 H.P. Patel and his brother, J.T., hope that you and your friends want more of the rich and aromatic cuisine of India and that you want it fast—say, in about 8 minutes from the time you order. The brothers Patel, who own 13 Salsaritas around East Tennessee, are the co-owners of Bearden Hill’s newest eatery, Tandur Indian Kitchen (opening this week). Tandur is a concept restaurant, and one that they hope will enter the hallowed pantheon of the franchisable fast casual, fine casual, whatever-it-is-don’t-call-it-fast-food segment of the restaurant business.

Indian food has its own subset of quick cuisine eaten by millions of people from equally numerous street vendors in the many cities of the great sub-continent. You can find some of these street eats around town, usually under the heading of Mumbai chaat. But that’s not exactly what the Patels have in mind. They’re after the sit-down deal—authentic dishes with familiar names like tikka masala, vindaloo, korma, and kadai. Dishes that require careful consideration with a proper approach to toasting spices and a cooking technique that builds big flavors without big pinches of salt. And they expect to do it better and quicker than anybody else.

H.P. Patel is all business. From the moment he begins talking about the restaurant, he becomes an encyclopedia on the subject of restaurant trends, about how Americans eat out, and what the future holds. He’s a man of the franchise, and he’s studied this business from every angle to create a niche he hopes you’ll buy into. He’s convinced that “Indian food is the next big thing.” After all, even Lay’s has a tikka masala potato chip (which, by the way, is not all that bad).

I’ll admit, my first conversations with Mr. Patel weren’t promising. As a general rule, I don’t like to visit, let alone dedicate column space, to restaurants that identify themselves by business-segment monikers. And the word concept gives me gas. Tandur looks even less promising when you see something on the menu called a Carolina Wrap—complete with pulled pork and slaw. So much for authentic Indian cuisine, eh? And did I mention the succotash?

Still, I’m all about Team Knoxville, and as this idea for Tandur was born here, and as the Patels seem have the business expertise and chutzpah to give it legs, I went forth with an open mind. The results were, mostly, happily surprising.

Tandur is an attractive place that looks like any number of nice fast-casual joints—except for the tandoor ovens, the visible spice kitchen, and the window into the meat storage. All the animal proteins are prepped on large kebabs and hang in a chilly closet right next to the oven, so you can watch the cooking process from cold to cooked. Likewise, just to the right of the cash registers and the menu boards above them, there’s a window into the spice kitchen where the real magic of India lives.

H.P. explains that in addition to the drive for bold flavors, “The other thing that’s happening in our industry is transparency. Everybody wants to see, everybody wants to know where everything comes from, so that is why we designed the entire kitchen open… people are not as comfortable going to something that they can’t see.”

So, if you order Goan lamb, you can watch your kebab as it descends to the fiery pit of the oven. You can also see your bread being made. Tandur will offer both plain and garlic naan (but no papadum and puri) that gets patted out by hand and cooked right before your eyes in a second tandoor. 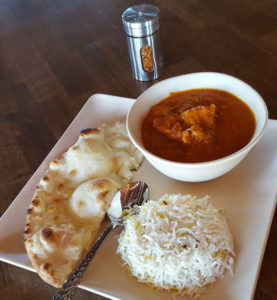 Fortunately, in addition to the business brains behind the project, there’s also a culinary mind at work, too. Hari Nayak is a successful cookbook author and restaurant consultant who, according to H.P., is in demand from Philly to Kuwait City. Chef Nayak, despite his slick Web image, is a down-to-earth, earnest, and super-nice guy who’s particularly interested in getting the flavors of his homeland into the mouths and minds of as many people as he can reach.

When confronted with a little skepticism about whether Indian food, like tikka masala, is really adaptable to the fast-food format while also maintaining a genuine flavor profile, Hayak smiles and offers up a few cooking secrets.

“We do it differently here than any other restaurant,” he says. “We roast [the chicken] in the tandoor—we don’t make it and keep it ahead of time; we cook it and put it right in the sauce and serve it. The advantage of that is that the meat is juicy and tender.”

Hayak seasons the chicken with the same spices that he uses to create the signature sauce, and then uses the cooking liquid from the chicken in the sauce, too, in order to create depth and uniformity of flavor.

“It’s fine dining in terms of food, but in a quick and casual way,” he says. “So we had to approach each of our dishes to see how we can do it quickly without losing any of the flavor. So when we make the sauce, the flavor of the chicken is already there, [as if the] chicken was cooked slowly for hours in there.”

As we chatted, H.P. shared some chicken tikka masala along with basmati rice and a piece of naan—all very nicely done. This meat was utterly tender and surprisingly moist—but, of course, it hadn’t actually been sitting in the sauce for hours with the concomitant risk of drying out. Both chicken and sauce were richly flavored and aromatic and utterly satisfying. Was it authentic? Pretty close, I’d say, and certainly worth coming back to try again once the restaurant has settled. 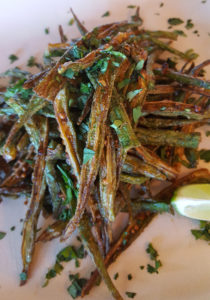 I’ll certainly return for a side of okra fries—I think I could eat them as a meal. These crispy strips of okra were salty, crunchy-from-start-to-finish delights that put to shame most other attempts at crisp vegetable alternatives to French fries and chips. They tasted of okra, yes, complete with its slight earthy taste, but this incarnation highlights its nutty side. If you have trouble eating one potato chip, you may fall into a horrible addiction here.

As for other menu items, Hayak says that “When it comes to wraps and salads we’re trying to be more mainstream. People tend to think about Indian cooking as ‘oh, it’s all curry, it’s all about chicken tikka masala or heavy sauces, and, oh, I don’t like curry.’ Indian cooking is not just about curry, and when we go home we don’t eat curry as much.”

H.P. and chef Hayak also shared a steak wrap which was slathered with a yellow mustard aioli—a flavor that has strong associations for me—so instead of having a taste of Hayak’s home I was more reminded of my own and its population of country delis serving ham sandwiches on white bread.

Likewise, the Carolina Wrap, apropos of its name, was very familiar, though seeing it on an Indian menu was strange. Hayak agrees, but explains “We wanted to do something with barbecue, and we wanted to do something local. So essentially the pork is slow-cooked in Indian spices and we use a tamarind chutney and we blend it with our own recipe for barbecue [sauce].”

“A common misconception about Indian cooking is that Indians are vegetarians. Not really. There are parts of India where people eat pork—I grew up eating pork. There’s a whole region called Goa, which was a Portuguese colony—vindaloo comes from there—and they brought pork.”

Still, the wrap is full of the taste of home, my home that is – even the tamarind chutney seems like something an adventurous Maryville cook might use for an edge in a BBQ challenge. Admittedly, it was pretty tasty for barbecue.

The slaw, however, was a winning wonder. “Instead of the traditional mayo based recipe, I made a buttermilk and mint chutney dressing for it and that’s what goes on top of the pork,” Hayak says. Punctuated with specks of cilantro, it’s a delicious, refreshing condiment – I can’t say that it tasted Indian, but there’s a whole world of Indian food that never makes it onto the Western plate, so who knows?

And what about that succotash… ?

“Home cooking in India is very different [from restaurant food],” Hayak says. “Our succotash is basically what we call in India subji—a vegetable dish which we eat at home as an everyday meal where there’s no sauce. But here we use the familiarity of things that people like to eat but give it a core Indian flavor without diluting what Indian cooking is all about. The first time someone walks in here we want then to feel as comfortable as somebody who knows Indian food. We want everybody to be here and enjoy. That’s why the menu is very diverse.”

The difficulty about franchises and chains is that when they strive to appeal to as many eaters as possible, they suffer an almost inevitable disconnect from real food and a true sense of place. Furthermore, they often fall victim to supply chains, and corporate demands for ever-escalating profit margins mandate economies of scale. Once upon a time, Taco Bell received daily produce deliveries with full heads of lettuce, boxes of tomatoes, and bags of onions that had to be washed, shredded, sliced and diced daily. Even the beans arrived dried and awaited their turn in a couple of giant pressure cookers before a powerful swirl with the fabulous bean drill. I understand that these are now quaint customs lost to the mists of time. Let’s hope Tandur walks a different path.