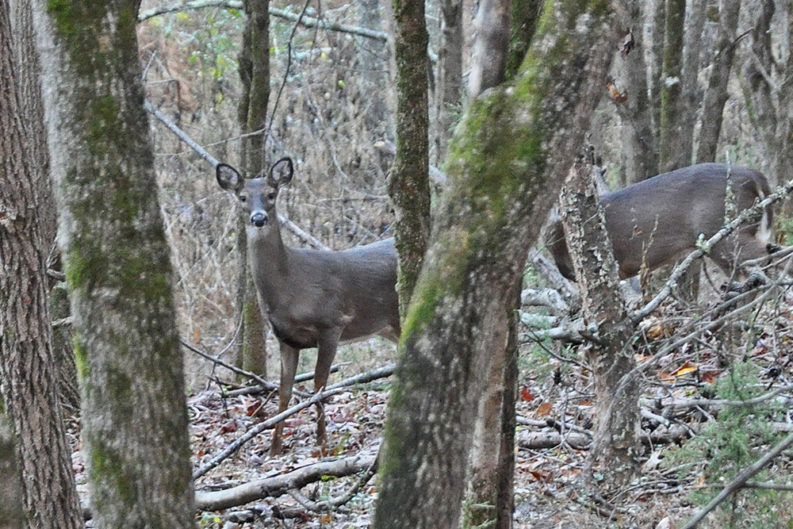 The first trail runner, I’m guessing, was a Neanderthal in minimalist footwear fleeing a saber-toothed tiger. About 300,000 years later came seasonal trail runners, motivated less by predators than by a desire to fend off the soporific effects of the holidays. They begin their regimes around Thanksgiving, their shuffling gait hidden in the woods far from the open roadways, paved sidewalks, and treadmills of the more conventional holiday jogger.

What follows is my most recent foray into trail running, an adventurous calorie-burning activity with fringe benefits for the mind and the spirit.

A couple of days before Thanksgiving I drove 17 miles from Maryville to my home trail, the East Lakeshore system that winds alongside Tellico Lake, mostly off of State Route 95. Among the many trailheads for East Lakeshore, I chose Mizell, off Jackson Bend Road, where I had never seen more than one other car in the parking lot.

You can go two ways from here: down Baker Hollow Branch toward rocky Mizell Bluff, a tempting spot to pause and reflect after a half mile uphill; or to the right at the trail sign on the Canal Branch, my preference. The first half-mile is either downhill or flat, and you enter a dream-like quarter-mile stretch over cushiony pine needles, the scent of the towering grove an energizing tonic. It’s about a mile and a half before the trail turns to gravel, an easy 3-mile run with a short, steep uphill on the return, at the end.

All of the East Lakeshore system (30 miles) is good for runs. It’s mostly deserted, especially in the winter, and there’s a loop of 2.4 miles at the Coytee Branch, an interpretive trail with labeled trees, and halfway through, a bench with a peaceful view of the lake.

One caution about East Lakeshore: You might see deer, and you also might see people who are hunting deer. About a mile in on Canal Branch, I met a young woman with a shouldered long gun and orange hunting vest, her face blackened like a warrior. She smiled as I ambled past her. 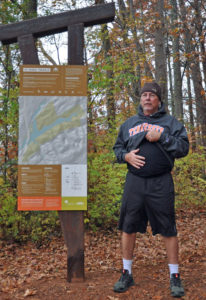 Kim Trevathan at I.C. King at the King’s Crown Trailhead.

My intent was to run a couple of trails to get in shape and try to keep up with Noah Bowman, a colleague at Maryville College who has run trails for 10 years, a veteran of over 50 races. On a dreary Black Friday, we picked I.C. King Park, off Alcoa Highway, his home trail.

It’s good to have a home trail, said Bowman, where you know every hill and snag, the hidden stumps, and the flora and fauna.

He said I.C. King was a good choice for someone just starting out again, because the network of trails (built by mountain bikers) allow for beginner, intermediate, and advanced runs. At the trailhead, he asked me if I was going to hide my car keys somewhere.

“Why would I do that?” I asked, and then I remembered a few years back stumbling in the middle of a run at the Land Between the Lakes, my keys flying out of my hand and disappearing somewhere in the leaves. Bowman prefers running empty handed: no phone, no keys, no wallet or music or map.

When he started talking about a trail called King’s Crown, I knew I was in trouble. Let’s just say I did some walking up those three crowns, the first one called Everest, the second called Middle, and the last one Kimble’s Ladder.

At any point, Bowman said, we could descend the crown to the flatter trail below, called Wimp’s Pass, but how could I not gasp and stumble my way up the last point of the crown, a namesake hill?

On the way out, on flat Everest Low Trail, I was cruising along at what I thought was a good pace, when a helicopter-like sound came from the treeline above us: a great blue heron swooped out into the open to a new fishing spot across Knob Creek embayment.

The best part of this run of about 3 miles was the recovery: drinking a cold beer and looking out over the still water of the embayment. I slumped on the concrete bench, gasping for breath between sips, and Bowman, not even breathing hard, cavorted on the shoreline.

Trail running, Bowman said, is superior to running on pavement because there’s “better scenery…, cleaner air, more solitude, better connection to nature, and less distractions.” It’s also better for your joints. Because you’re running on varied terrain, he said, constantly adjusting for roots and rocks and ups and downs, you don’t have the “constant balanced pounding against unforgiving concrete.” 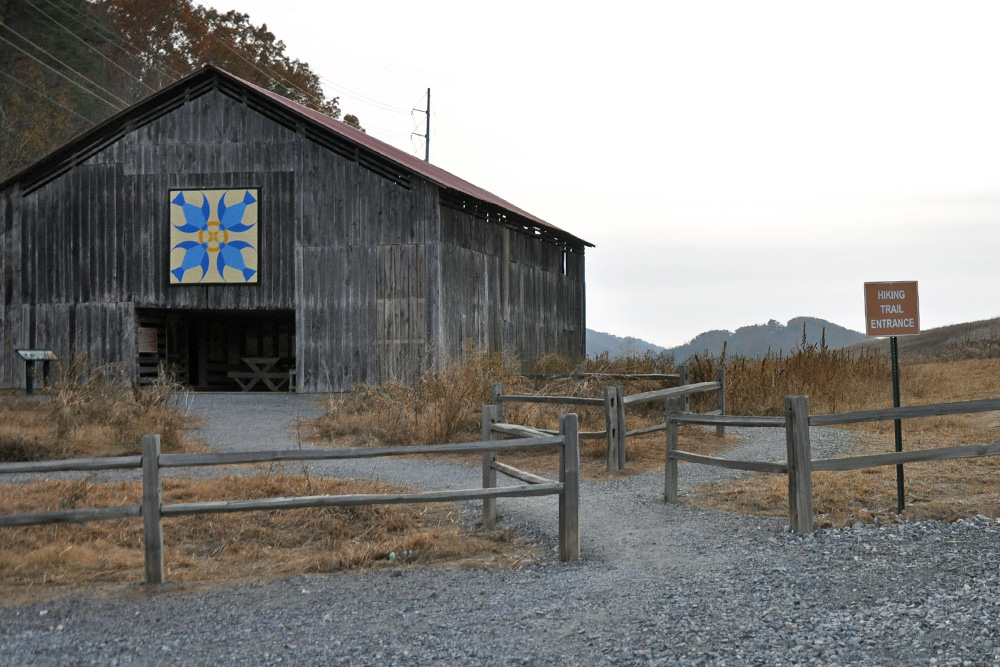 Seven Islands is a great place to trail run if you’re just starting out. You’re traversing grasslands cultivated to attract birds, the trails are wide and generally soft, and there are very few blind spots or brutal hills. I started at the bluebird barn and made the mistake of ascending the Upland Trail at the outset, too much too soon, though at the top I slowed down and took in the grand vista of Chilhowee Mountain and the Smokies beyond, the French Broad River in the foreground.

What I love about the Seven Islands Loop Trail and the Seclusion Bend Trail combined is trotting alongside the slow moving French Broad, birds chirping, cawing, squawking and rustling in the leaves the whole way. A trio of deer stared down at me from a knoll when I’d slowed to a walking pace for a rest. For me, seeing deer never gets old. After they stare you down and dart away into the woods, it gives you an example of grace and speed to aspire to. 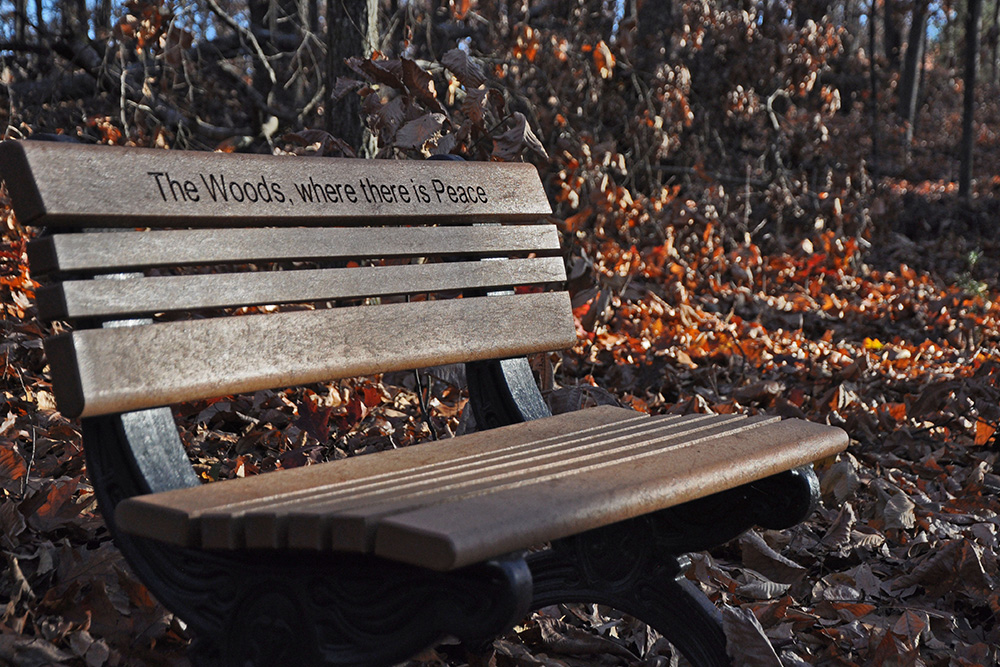 About a half-mile in on the Meadow Loop Trail at Fort Loudoun State Historic Park, this bench reinforces a trailrunning mantra.

I can almost guarantee you’ll see deer on Fort Loudoun‘s Meadow Loop Trail, an up-and-down route of about 3.25 miles through woods, meadow, and lakeshore, much of it thick with fallen leaves. If you run it clockwise, the hardest hill will be in the last half-mile, a curving, gravelly slope that you think will never end. After summiting, look for the deer in the last half-mile or so.

This trail is a lot more difficult than Canal Branch or Seven Islands, and after confronting two does who did not even attempt to run away from me I realized how much work I have to do to get back in shape.

Andrew Weil, in his book Healthy Aging, recommends walking and other low-impact activity for those getting up in years. Running and “extreme sports,” he writes, put older folks at risk for injury and if you really overdo it, can weaken your immune system.

Well, that’s a blow against adventure and pushing limits that I refuse to listen to. For now. Besides, what if I come upon a saber-toothed tiger?

The Knoxville Track Club has a comprehensive guide to area trail-running venues on its website: ktc.org.