At the Gatlinburg-Pittman High School Shelter, Survivors of the Fire Gather to Find Their Way - The Knoxville Mercury 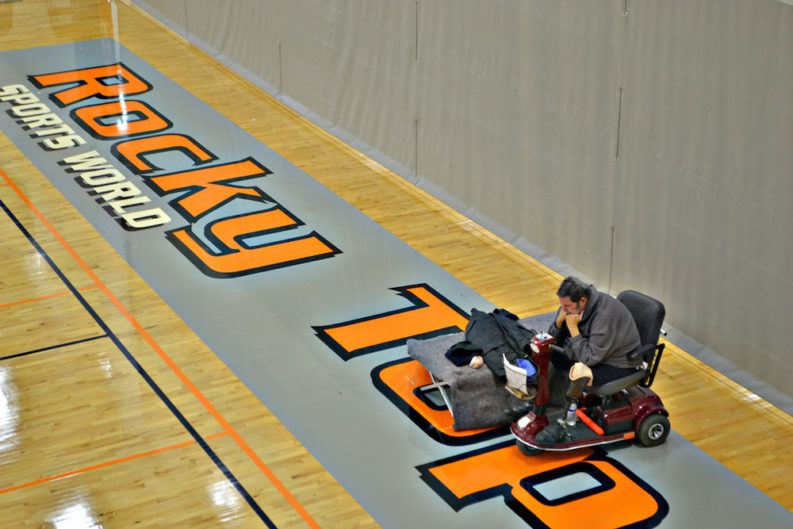 It’s Tuesday in Gatlinburg, and the smoky aftermath of last night’s fire is draped like a dirty quilt across this mountain town. From its folds Gatlinburg-Pittman High School has emerged as a command center for first responders and a refuge for displaced residents.

It is one of several shelters set up in churches and community centers in the area, and for the first few hours of the day the outpost is eerily calm.

The evacuees seeking refuge in the school’s athletics complex, Rocky Top Sports World, are visibly exhausted. Some attempt rest on cots in the gymnasium, Red Cross blankets pulled over their heads to block out the cheerful fluorescent lights. Others sit slumped in chairs, staring at images of their ruined neighborhoods on television screens, try to piece together the narrative of a waking nightmare that continues to unfold.

Carol Lilleaas watches the screen intently, searching for any clue that her home of 12 years survived the night. 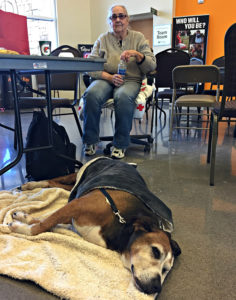 She gestures at the dog sprawled on a blanket at her feet. “It happened so quickly. The only things I had time to grab out of my house were my animals and my husband’s ashes.”

Meanwhile, an urgent-voiced civilian has begun circling the room, dispensing information to evacuees. His name is Erik Cooper and he’s the bearer of good news for some, bad news for others.

He has just come from Ski Mountain, where he broke past the security line to check on the residences (including his own two houses) and businesses there. He took video while driving, verbally inventorying damage, categorizing each structure passed either as “still standing” or “burned to the ground.”

Cooper’s assumption of a town crier role began the night before; as the fire was approaching, he banged on neighbors’ doors and led a caravan of about 40 people off the mountain to safety. Concerned by the lack of information being disseminated—no fire evacuation alert was ever issued—he then drove to the studio of Kodak radio station Mix 105.5. “I kicked in his door, told him to stop playing music, told him all the stuff people needed to know,” he says.

Now he pauses in front of Lilleaas and asks her where she lives. She tells him—Smoky View Road, near Ripley’s Aquarium—and he shakes his head.

A muffled gasp escapes Lilleaas’ lips. It’s the sort of sound one might make upon opening the oven to a batch of burnt cookies, not upon learning that everything you own has gone up in flames.

However understated the reaction, she composes herself quickly.

“Well, it doesn’t help to cry over spilt milk,” she says, matter-of-factly. “Somebody set that fire, we don’t know who, but God will get them.” 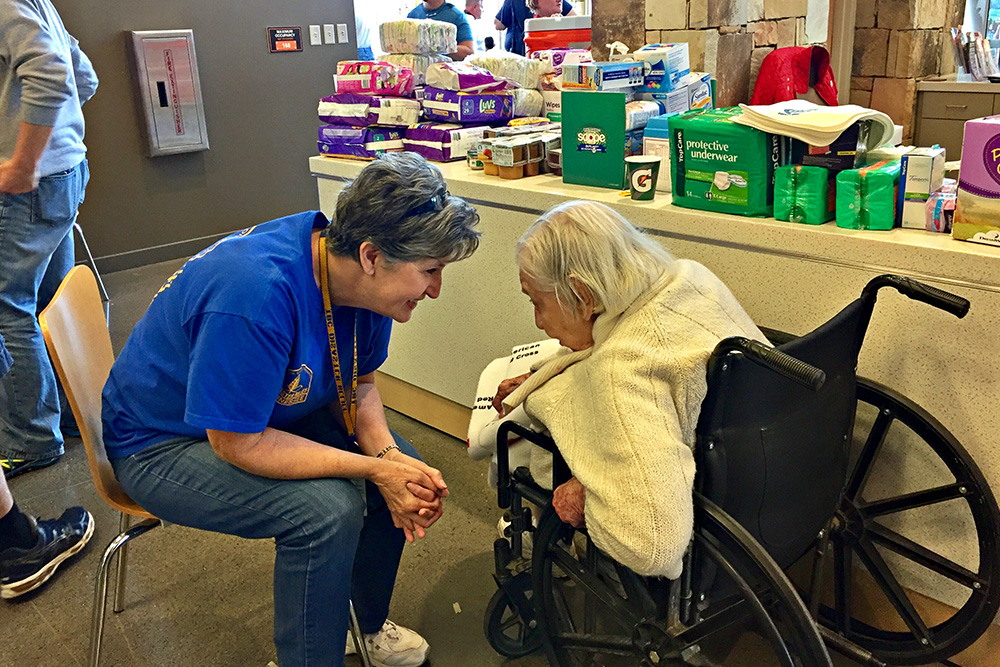 Grace under fire, in the literal sense, is a recurring theme in the shelter’s refugees. Outside in the parking lot, Jeff Barker has been sitting on a curb for the past two hours. It’s clear from his glassy, bloodshot eyes that he has been crying.

An electrician by trade, he’d been at work in Sevierville the day before when he got word about the fast-spreading flames.

“I tried to get home, but when I got to Gatlinburg they were stopping people from entering town. So I had to go in by foot,” Barker says.

It was too late. “By the time I arrived at my apartment, apartment’s gone, car’s gone, pets are gone,” he says. “It’s devastating when you come home, and all you can do is flee with the clothes on your back.”

Like Lilleaas, however, Barker refuses to dwell on his own losses.

“I’m torn up inside, but I’m keeping my head positive. I’ll be okay. I’ve got a very good job, a good boss. I’ll have to relocate for sure, probably to Sevierville; it’s going to take years to rebuild this town. But those who aren’t as fortunate and kids and older folks … that’s who I worry about.”

What comes to mind for many of us when we think of Gatlinburg is its shiny, thriving side: rental cabins, pancake houses, folksy wedding chapels, and assorted tourist traps. We forget that all this is set against the backdrop of rural Appalachia, which for all its natural beauty and fierce independence is still prone to getting socioeconomically left behind. And it’s that backdrop that was hardest hit.

Nowhere is this more apparent than at the shelter. Many of these evacuees are here because they have no place else to go: they can’t afford a hotel room and they don’t have family in the area to take them in.

They are working poor families, disabled veterans, immigrants both documented and not, and wheelchair-bound elderly. They are tourism industry workers living paycheck to paycheck who were already just barely scraping by before the fire, and now they’ve lost their homes (if they were fortunate enough to own a home—many are renters, and likely without renters’ insurance), as well as their cars and jobs.

The chain-link fence surrounding the field is lined with evacuees gawking at the surreal sight. After all they’ve endured in the past 24 hours, that they have any energy left to experience a moment of wonder is remarkable in and of itself. 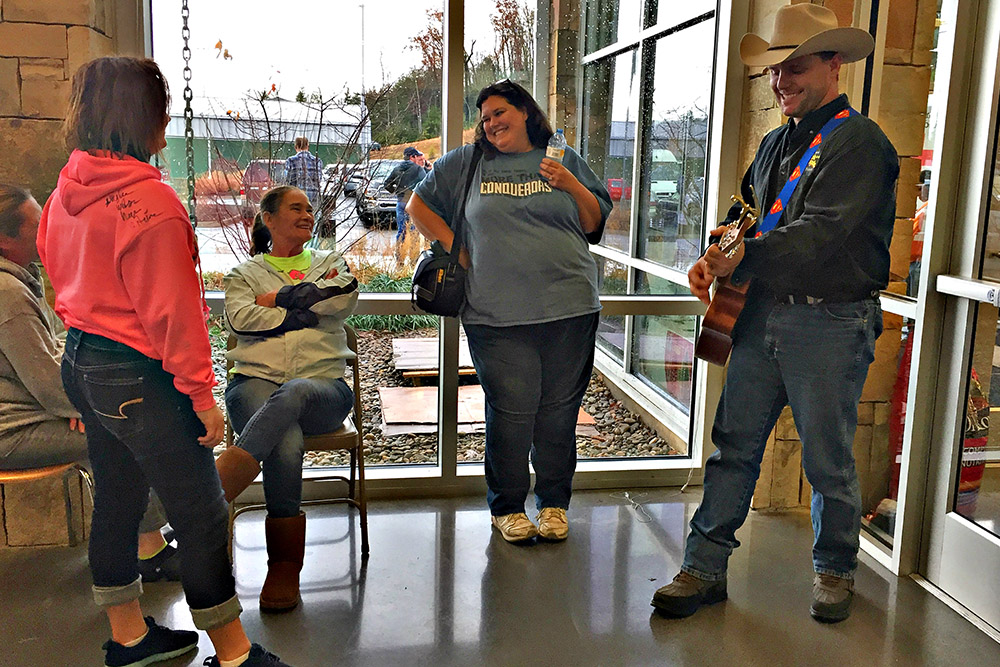 On day two, the shelter at Rocky Top Sports World has awoken from its in-shock daze. It’s tenfold busier, largely due to an influx of area residents who didn’t lose their homes but don’t have power. They’ve come for food, of which there is no shortage. Tables are covered by a buffet of protein bars, chips, and cookies, and everyone seems to have a slice of pizza in their hand.

By all appearances, Tennessee’s “volunteer state” status is in excellent health. The place is swarming with volunteers, sorting through mountains of clothing and supplies, stacking cases of water, and providing medical and counseling services. Donated food, clothing, and supplies are everywhere, literally—heaps and heaps of stuff strewn in corners, stuffed under stairwells, and stacked to the rafters. And it just keeps coming, by the truckload. Eventually, the Red Cross puts a hold on donations until there is a more feasible place to accommodate them.

Spirits seem brighter today as well. Yesterday’s deafening silence is replaced by the hum of people talking, even laughing. A family who’d been evacuated from the now non-existent Park Vista Hotel joke about giving Gatlinburg a bad Yelp review: “Worst vacation ever!”

Elsewhere there’s a Santa Claus floating around taking selfies with residents, and a crooning country singer is encircled by smiling women. Earlier in the day the shelter enjoyed a surprise visit from Vols quarterback Josh Dobbs, lineman Brett Kendrick, and several UT cheerleaders.

The gymnasium is still bordered by cots, but the courts have been taken over by throngs of kids playing basketball. Their sneakers squeal as they sprint back and forth across the varnished hardwood, and they exchange playful verbal jabs at one another. Just kids being kids, momentarily oblivious to the tragedy enveloping their community.

Among the volunteers is Jerry Askew, vice president of media relations at Tennova Healthcare and an ordained Episcopal deacon. He headed to the shelter after getting a call that they needed nurses and any help Tennova could provide, and he figured some spiritual care could be useful as well.

It’s been a tough day, he says. How does one comforts people in a situation like this?

“You just try to listen more than anything,” Askew says. “Let them say what is on their heart and assure them that they are well loved, and we will try our best to make their life whole and we will pray for them.”

By now, the national media has descended upon the command center in full force. The parking lot is full of vans topped by huge satellites, representing all major networks as well as affiliates both local and hailing from surrounding states.

Press briefings are held in the high school library across the football field from Rocky Top Sports World. When the livestream broadcast comes on, the shelter goes quiet and reality comes crashing back in. People gather around the televisions to listen for updates: the latest number of dead and missing persons, the newest count of leveled structures, clues about what they’ll be going “home” to. 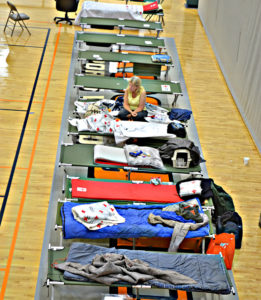 As the week lurches on, disaster-relief efforts continue to coalesce. Dolly Parton, patron saint of Sevier County, announces a “My People Fund” with 100 percent of the proceeds going to help displaced Gatlinburg residents. A groundswell of local businesses and organizations step up to provide aid. Even nature seems to be pitching in, finally dousing East Tennessee with rain after several long months of drought.

After being initially overwhelmed by donated supplies to the point of turning them away, Pigeon Forge opens a distribution center aimed at getting supplies into the community. It’s located in the old Boyds Bear facility, a massive red barn that formerly housed a teddy bear superstore.

Casey Cordy, a Knoxville resident with a background in sociology and social justice, spent Saturday volunteering at the center. She’s worked in disaster relief before but says it was hard not to be awestruck by the outpouring of donations for Gatlinburg fire victims. East Tennesseans clearly take pride in taking care of their own.

She does, however, offer a reminder that while raw generosity goes a long way, it’s only as useful as its practical application. She shares the example of a Gatlinburg couple who had lost their home and come to the facility for food: “This lady said to her boyfriend, ‘Why are you picking up so much canned food? We don’t have a can opener.’”

Ordinarily, this should be an easy enough problem to solve: go to the store, buy a can opener. But we’re talking about a segment of the population who now have literally have nothing to their name, and perhaps had very little to their name to begin with.

“What about the people who were already hard off, and then they got kicked in the pants while they were already down?” Cordy asks.

The loss Gatlinburg has experienced is multi-tiered and complex. Rebuilding, and ensuring that no residents fall through the cracks in the process, will require a community effort that extends well beyond the bounds of Gatlinburg proper.

During a press briefing earlier in the week, Gatlinburg Mayor Mike Werner fielded a question about the loss of his own home, which he built himself, and condominium business. How was he coping?  Werner answered by shifting attention to the residents of his town, whom he describes as “some of the very best people in the world—very strong, very resilient.”

“We’ve gotten a lot of support, and if you didn’t have the support this would be unimaginable,” he says. “But we’ve all lifted each other up, we’re going to continue to do that, we’re going to rebuild our town, and we’re going to do whatever we can for our citizens. This is a time when we just have to rely on each other.” 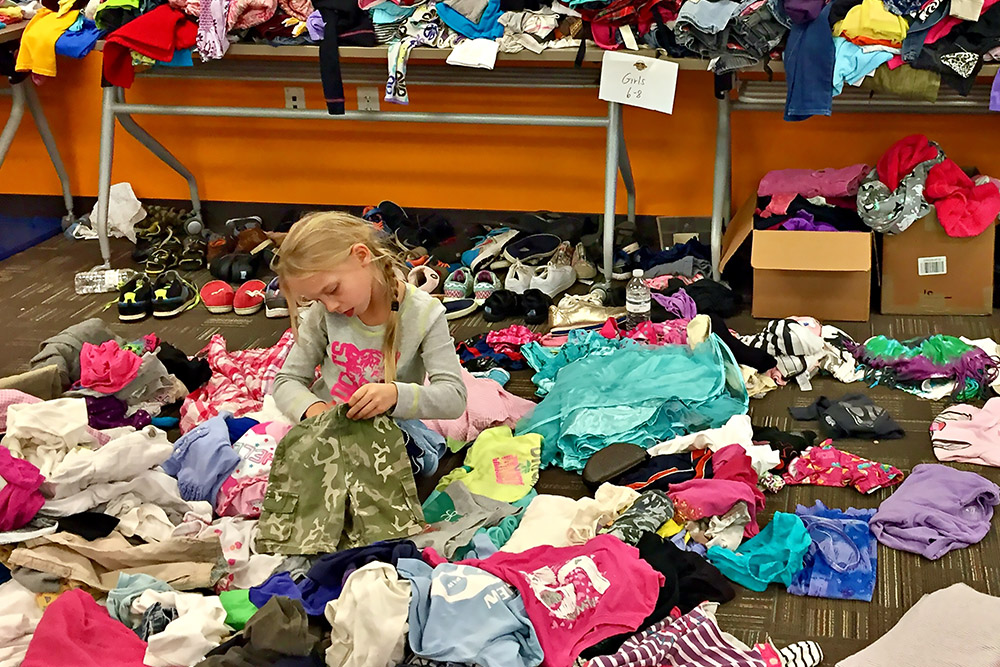