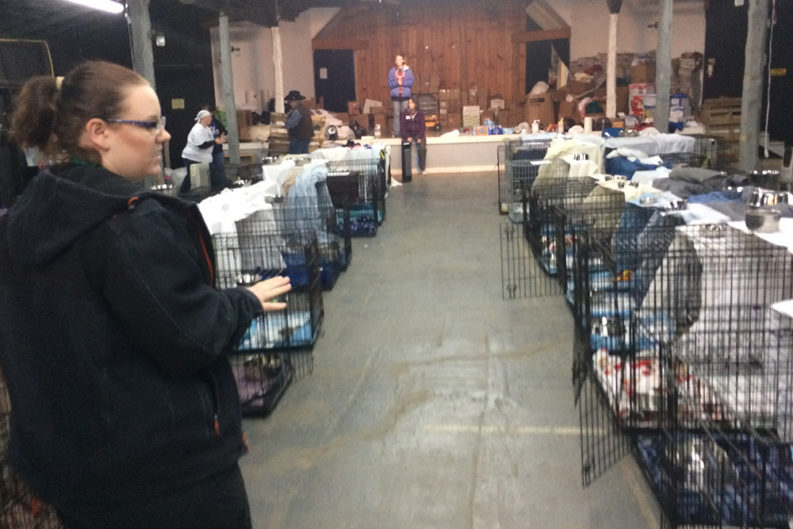 The sadness is evident in the animals’ eyes.

It’s another aspect of the tragedy that has compounded itself daily since a firestorm raged last week through the populated ridges above and around Gatlinburg, killing at least 14 people: Dozens of injured, scared, and lonely pets and companion animals are housed in an emergency shelter and veterinary clinic at the Sevier County Fairgrounds that is still operating 24 hours a day.

Some of the animals were left behind by owners who had no choice but to flee for their own lives as fire raged into areas like Chalet Village and Ski Mountain in Gatlinburg and Sevier County on Monday night. And as of Sunday, the animals kept coming. They were brought by citizens, animal-control officers, firefighters, police, and residents who rescued them during brief forays into their ravaged neighborhoods. Domestic and feral cats; dogs great and small. A hen. A snow-white dove.

“People will claim them, then they’ll bring more in. It’s like a revolving door,” says Kristi Thomas-Elohe, who was on her third day of volunteer work. There were 30 dogs at the temporary shelter on Sunday afternoon, and 40-45 cats. Those include some animals that the Humane Society is temporarily boarding because their owners’ homes were destroyed. Owners had claimed about 10 animals as of early Sunday. Only one animal, a severely burned cat that was eventually euthanized at the University of Tennessee, perished after arrival at the shelter, established after the regular county shelter was itself evacuated last Monday. 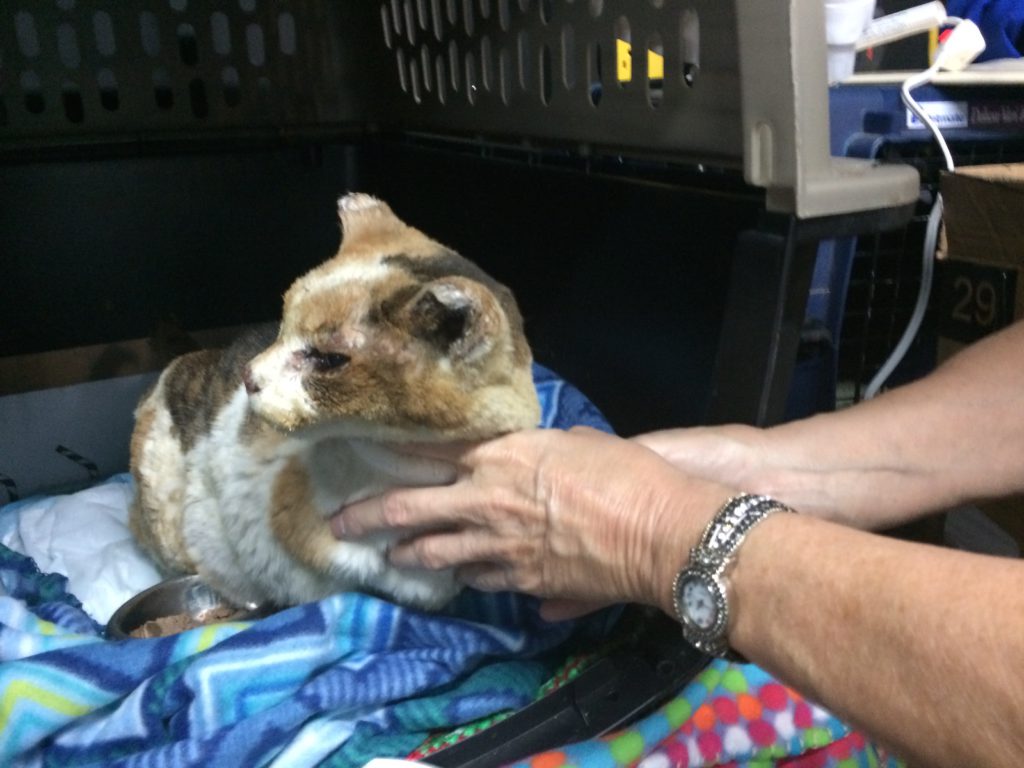 Lines of crates were occupied by melancholy or injured dogs in one area. A retriever. A terrier. A boxer. A great Pyrenees with a burned nose stood stoically with pained eyes at the end of a leash. Injured cats were crated nearby, one of which was recovering from serious burns.

Some of the animals’ ears and paw pads were burned away as they frantically fled the flames. Cats lost tails and whiskers. Many of the animals suffered the effects of smoke inhalation.

But, in ways, they are the lucky ones: Countless pets perished in the fire. Search-and-rescue teams have found many carcasses, says Sevier County Humane Society Director Michaela Sory. Others likely fled deep into the woods and succumbed to their injuries.

“I know some rescue crews are still finding animals,” she says. “A lot of animals are confirmed dead,” adding to the immense loss suffered by those who lost their homes and property.

But the scenes of reunion are part of what drives Sory and the veterinarians and technicians and other volunteers running the shelter around the clock.

“We keep it together knowing what we’re doing is helping the animals,” Sory says. “[Owners] come in here and happen to find their dog, there’s a glow of excitement—it’s one piece of their life they can get back.”

No such joy was evident during a visit to the fairgrounds on Sunday. One man inquired about a flock of rare ducks trapped in a pond in the burn area. Another woman, recently relocated to Jacksonville who returned to the area in response to the wildfires, searched unsuccessfully for a friend’s cat that couldn’t be located when its owners had to vacate their Pittman Center home, which survived. But it was mostly a scene of grim-faced veterinarians, shelter staff and volunteers who helped collect what was an endless arrival of donated pet supplies and food as heavy rain—further extinguishing the remaining hotspots of the disastrous fire—pummeled the rooftop.

Sory, who at 28 years old is managing the massive animal-care and shelter logistics, says roughly 1 million pounds of food has been donated, and massive tents erected by the fairground’s owner were piled with items ranging from dog food and cat carriers to bleach and mountains of bottled water.

“I never imagined it would be an ordeal of this magnitude,” she said, but noted: “We’ve been overwhelmed with support and help,” she said. Hundreds of vet techs and veterinarians are either assisting on site or have offered help. The efforts will continue, though volunteer efforts can’t go on indefinitely. “Until things can be rebuilt we will serve the community,” Sory says.

The stray-hold time will be extended, but Sory says anyone who is missing an animal should come to the fairgrounds as soon as they can. She says a more regimented volunteer process would be put in place soon via social media to accommodate the volume of support the shelter is receiving.

For updated information on how you can help, go to the Sevier County Humane Society Facebook page at facebook.com/SevierHumaneSociety. The search-and-rescue teams who have collected many of the injured animals are also in need of hand-warmers following the recent rain and dip in temperatures, which can be sent to Station 1 1230 East Parkway, Suite 2. Gatlinburg Tenn., 37738.