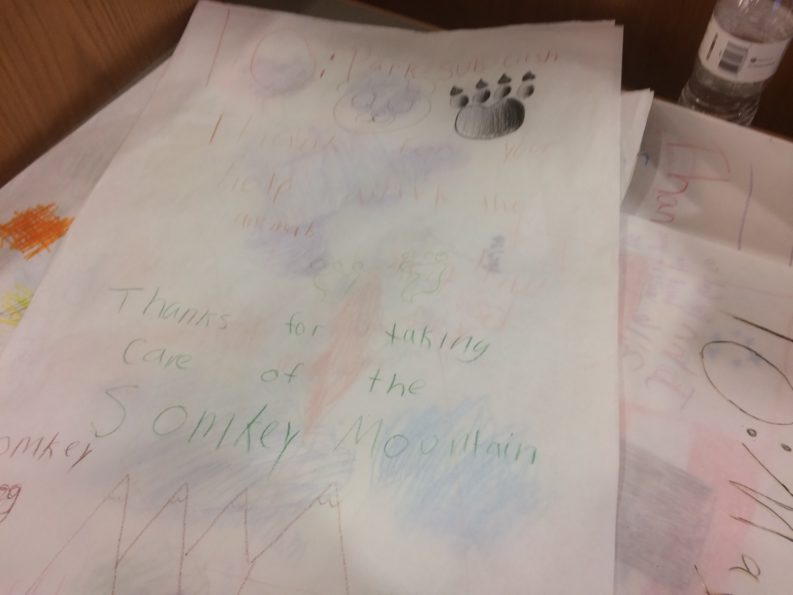 A wildfire killed at least 10 people when it turned hillsides around Gatlinburg into a hellscape, but all fires in the city and Sevier County have been extinguished with the exceptions of a few smoldering hot spots, County Mayor Larry Waters said Thursday afternoon during an emotional press conference. Owners and renters can access some properties beginning Friday; the parkway through downtown Gatlinburg will not reopen until Wednesday, and an overnight curfew remains in effect. It was the largest fire —11,000 acres within the park — in Great Smoky Mountains National Park history, but no cultural resources were damaged and no widespread evacuation of backcountry hikers was necessary.

The death toll rose after searchers found three more bodies Thursday; most of the reported fatalities occurred in the Ski Mountain and Chalet Village areas, said Gatlinburg Police Chief Randall Brackins.  At least 80 people received hospital treatment for varying degrees of injury, Waters said. Some are still missing and the death toll could rise in the wake of the 17,000-acre fire. The remaining searches are expected to be finished by Friday.

The downtown parkway will not reopen until Wednesday, said Gatlinburg City Manager Cindy Ogle. Property and business owners and renters can return to their properties beginning Friday morning with the exception of the areas most heavily damaged — along Beech Branch Road, Wiley Oakley Drive and Walker Trail — in Monday night’s conflagration.

The fire, which destroyed hundreds and homes and businesses and thousands of acres of wildland, apparently had its origins within the national park near the Chimney Tops, and threw wind-driven embers and sparks across a large area. A spokesperson with the Bureau of Alcohol, Tobacco, Firearms and Explosives was present Thursday afternoon, and said the agency was helping with forensics to determine the exact origin of the Gatlinburg blaze. Fires ignited in multiple areas during the windstorm.

No cabins or other cultural resources were lost in the national park, and Leconte Lodge was unharmed, based upon a helicopter flyover, park spokespersons said early Thursday.

No damage was reported at the Chimneys picnic area, and the only damage in the historic Elkmont portion of the park — which is dense with decaying wood structures — was a bathroom struck by a falling tree. Winds were well above gale-force in the area Monday, and trees were downed throughout the area. Evidence of the windstorm are everywhere in Sevier County, over which blue but hazy skies shone Thursday; the smell of smoke still tanged the air.

Twenty-nine hikers were in the backcountry when the fire broke out over the weekend and were alerted to the danger; only two hikers — through-hiking the Appalachian Trail — made contact with park personnel. A ranger gave them a ride out of the park from Newfound Gap, according to park spokesperson Warren Bielenberg.

Some 300 people remained sheltered at Smoky Mountain Sports World off U.S. 321 on Thursday, but Michelle Hankes, director of the East Tennessee Red Cross, said the actual number of displaced was likely considerably higher, given the number of people staying with relatives or who ventured outside the area. The complex, near Gatlinburg-Pittman High School, also served as a staging area for emergency responders, and two whining helicopters sat on a baseball outfield as a steady stream of those affected by the fire crowded the area. Some sought information on when they could return home; others were business owners needing documents to process payroll. Some came with donations of clothing. Fire apparatus from multiple jurisdictions rolled in and out, including a fire truck from rural South Pittsburg.

John Steich waited patiently for information on when he could return to his home of 10 years on Cheshire Court. He fled it through flames with his wife and dogs Monday night.

He went to bed after work Monday, cognizant of the Chimneys fire, but not concerned.

“I didn’t think there was going to be anything in the city of Gatlinburg,” he said. His wife awoke him about 10:45 p.m. after hearing “popping” and noting the power was off.

“I thought she was pulling my leg,” he said beneath a Trump 2016 ball cap Thursday as smoke columns still peeled off the hulk of the Smokies in the background. Then he looked out a window and saw a house uphill in an adjacent development completely in flames.

“I thought the whole place was burning down, I could barely see from the smoke coming down the hill.” He and his wife and dogs plowed down the ridge through the fire to the Gatlinburg Police Station. “I didn’t know which way to go; there were so many fires, we were surrounded, so it seemed to me.

“When you’re driving through a fire you never know what’s going to be on the other end. You just pray, and by the grace of God we made it out of there.”

The police directed him to the shelter. “They were so covered up, these poor guys,” describing the efforts of police and firefighters. “There’s no way anybody could’ve done anything,” he said. “I think everyone has done a hell of a job.”

Nearby on Thursday outside the Anna Porter Library on Proffitt Road, a sympathetic and kind Gatlinburg police officer offered information to a resort owner wondering whether she could send private security to her undamaged development, fearing burglaries and vandalism.

He apologized, stepped away and leaned into the window of a colleague who stopped a police vehicle nearby. “No time off,” he is overheard saying. “No time off.” Two officers lost their homes in the fire and continue to work, Waters said.

The county mayor — obviously sad and tired but quick to note the outpouring of support the community has received — lost his composure at one point in the press conference. It happened when someone displayed a collection of well-wishes written to city and county officials and first responders from students at Pittman Center Elementary School.

He apologized to the press, and received forgiving murmurs in response.

“It’s an emotional thing — kids sending an expression of their love to all of us, the emergency responders and all of the people, and it’s just something that touched my heart for them to do that.”