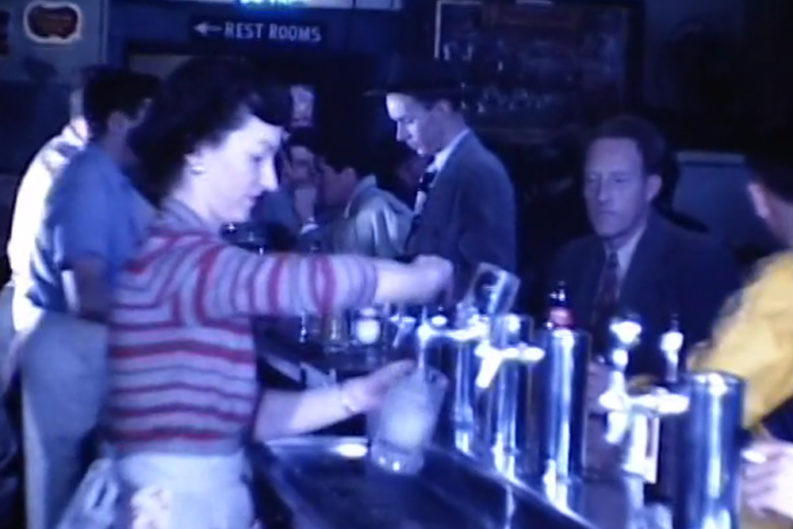 Arthur Q. Smith: The Trouble With the Truth is a new two-CD set from the German reissue label Bear Family that focuses on the little-known Knoxville songwriter Arthur Q. Smith. During the 1940s and ’50s, Smith wrote songs that were recorded by Hank Williams, Roy Acuff, Kitty Wells, and dozens of others. But he rarely received much recognition, in part because he often sold the rights to the songs for $15 or $20 to pay his bar tabs.

The Trouble With the Truth was possible because of the wealth of material collected by the Tennessee Archive of Moving Image and Sound in the past decade or so. One of the discs is made up entirely of Smith’s demos and other recordings that the archive holds, and most of the photographs and documents in the accompanying book are from TAMIS. What wasn’t made available in the package, however, are home movies featuring Smith, which, like the recordings and photos, have trickled in from various sources.

The earliest footage we have of Smith is a from a two-minute film from around 1942 documenting an WNOX road show in rural Kentucky, probably at a coal-mining camp. Smith, the booking manager for the station, arranged out-of-town gigs like this. Smith can be seen in a clear close-up and hamming it up onstage in a comedy routine with Smilin’ Eddie Hill. This footage, which came our way courtesy of Tony Cianciola, an accordion player who occasionally brought his 8mm camera to WNOX gigs, also includes the earliest known moving images of Chet Atkins performing.

Smith also turns up in a remarkable film shot backstage at WNOX in 1953. The three-minute reel consists of close-ups of more than 25 WNOX performers, including Lowell Blanchard, Claude Boone, Mother Maybelle and the Carter Sisters, Speedy Krise, Fred E. Smith, and Carl Story. Smith makes an appearance lighting a cigarette and grinning. It’s unclear who shot the film, but it appears to have been made just to have a visual record of who was present at some unknown occasion. TAMIS only has Story’s VHS copy of a silent 8mm film transfer, so the quality could be better. But it’s unlikely another home movie featuring so many WNOX performers of the time will turn up.

Smith frequented the Three Feathers Sandwich Shop, at the corner of Gay Street and Jackson Avenue, where Nouveau Classics is today. Before Smith’s time, the space had been a saloon; despite its name, the Three Feathers was essentially a beer tavern. It was a popular hangout for musicians who wandered over from the WNOX studios across the street, looking for a bite and a beer before or after performing. They might also buy a tune from Smith, who spent hours sitting at the bar. The Three Feathers was owned and operated by Leonard Shersky (the brother of Harold’s Deli proprietor Harold Shersky) and his wife, Helen. Emilee Shersky, Leonard and Helen’s daughter, donated to TAMIS a batch of her parents’ papers, which included extensive documentation of songs they had purchased from Smith. They seem to be the only ones who kept evidence of such transactions.

A while back, Emilee dropped off some films, among them a 16mm reel from around 1950. The interior of a bar appeared in flawless Kodachrome color. We recognized Leonard and Helen Shersky behind the bar. The man at the counter reading a newspaper and draining a beer glass also looked awfully familiar. It took a few seconds to sink in that we were actually looking at Arthur Q. Smith, holding court at what served as something like an office for him.

It would be a pretty remarkable piece of footage, even if Smith weren’t in it. I showed the reel to Florentine Films producer Junie Dunfey, who was in town looking at material for Ken Burns’ upcoming Country Music series, and she was fascinated. It’s rare to find such lingering views of a mid-century bar interior on 16mm. The film’s processing box had a return address: American Heating and Supply Co., 310 W. Jackson Ave., a place operated by a man named R.L. Scruggs. It was just around the corner from the Three Feathers, where the Happy Envelope is today. Scruggs must have had a film of the bar made and given it to the Sherskys. Maybe he made similar films of the other businesses on the 100 block of Gay Street and on Jackson Avenue, and we just haven’t come across them yet.