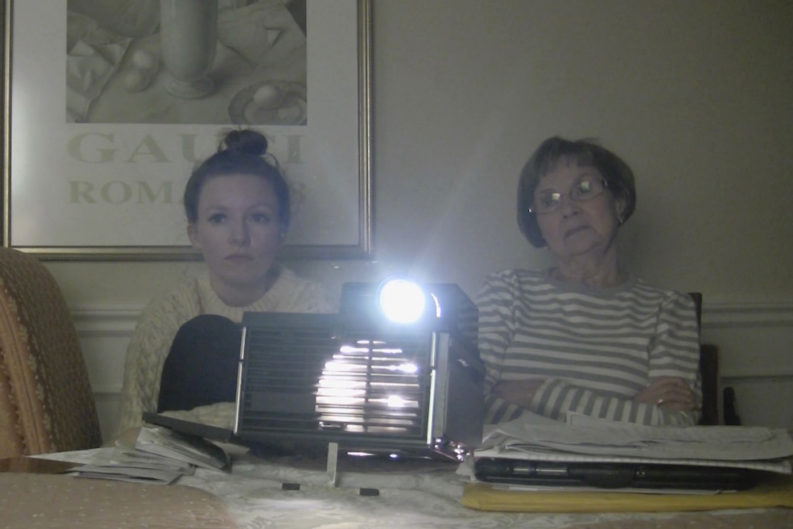 Next week, the Public Cinema launches a new strain of programming they’re calling the Lab. With the series, Public Cinema programmers Paul Harrill and Darren Hughes intend to cast light on emerging no-budget filmmakers, the kind of scrappy but resourceful do-it-yourselfers who make up for limited resources with strong voices.

The first Lab screening is a double feature: two films that reflect on eating and our relationship with it. In the first movie, mastication is a method of masochism; in the other, it’s a means of meditation.

First up is “Shade,” a short film by Julian Tran and Cuyler Ballenger. It’s a story of perversion and intense anal fixation in which the lives of Shade, a girl with braces who lives to chew, and Clementi, a slick businessman with a taste for homeopathic drugs, intertwine. It’s shot on what looks like DV tape, or at least some type of low-grade camcorder, which lends the film an illicit air. Its style exists on the same continuum as many of the great American lo-fi films of the past decade; it recalls more recent mumblecore-adjacent movies like Nathan Silver’s Stinking Heaven and early ’00s movies like Damon Packard’s Reflections of Evils and Ronald Bronstein’s Frownland. In “Shade,” Tran and Ballenger linger closely on every face, cutting an instant ahead of each word and action, turning the comfort of food into a cringe-inducing frenzy.

The second film in this program, the much quieter Never Eat Alone, plays as a poignant chaser to the teeth-grinding grit of “Shade.” Never Eat Alone is the debut feature from Canadian director Sofia Bohdanowicz, who has received previous acclaim for “Last Poems,” a trilogy of shorts. Like films by many of her no-budget peers across the northern border—Kurt Walker (Hit 2 Pass) and Isiah Medina (88:88, which the Public Cinema screened last winter)—Bohdanowicz’s work is a tender slice of docu-fiction. It’s the story of Bohdanowicz’s real grandmother, Joan Benac, and her bond with Audrey (Deragh Campbell), her fictional granddaughter. In the 1950s, Benac appeared in a televised musical melodrama filmed at Casa Loma, a Gothic revival mansion in Toronto that is now a museum. She reflects on a brief romance with a baritone-voiced cast member whom she attempts to track down with the help of Audrey and the Internet.

At first, Never Eat Alone reads like nonfiction; the photography feels almost accidental in its naturalism, but there’s an intentionality to Bohdanowicz’s sense of framing and cross-cutting that betrays its fictional elements. Bohdanowicz masterfully moves among Joan, Audrey, and an old man whom we presume is Joan’s ex-lover as the three exist in quiet solitude; ironically, they’re often shown eating alone.

The film’s repetition allows it to explore the ritual of our relationships, both with ourselves (eating, preparing food) and with others (reading old letters to a granddaughter, trying on a grandmother’s clothes). Bohdanowicz’s quiet precision and her interest in cross-generation relationships among female family members inevitably recalls the work of the late Belgian director Chantal Akerman, whose 1975 masterpiece Jeanne Dielman, 23, Quai du Commerce, 1080 Bruxelles is perhaps the greatest—and most sour-tasting—film about food.

By choosing two food-focused films to initiate their new series, Harrell and Hughes offer us a bit of self-reflection. Movies about food often are less about the act of eating and more about the communion that happens within the theater. The filmmaker may break the bread, but it is the audience members who share the loaves and fishes.

In the case of the Public Cinema, the programmers have as much hand in the cooking as anyone behind the camera. Many of my favorite Knoxville memories across the past year and a half have happened at Public Cinema screenings in the darkness of the Knoxville Museum of Art auditorium or on the uncomfortable seats at Pilot Light. I have shared cinematic feasts with old friends, hardcore cinephiles, casual moviegoers, and complete strangers thanks to Harrill and Hughes. The Lab’s launch is another step in the right direction for Knoxville’s loose but growing cinematic community. The first installment proves that filmmakers—and film programmers—with minimal resources can still say quite a bit.