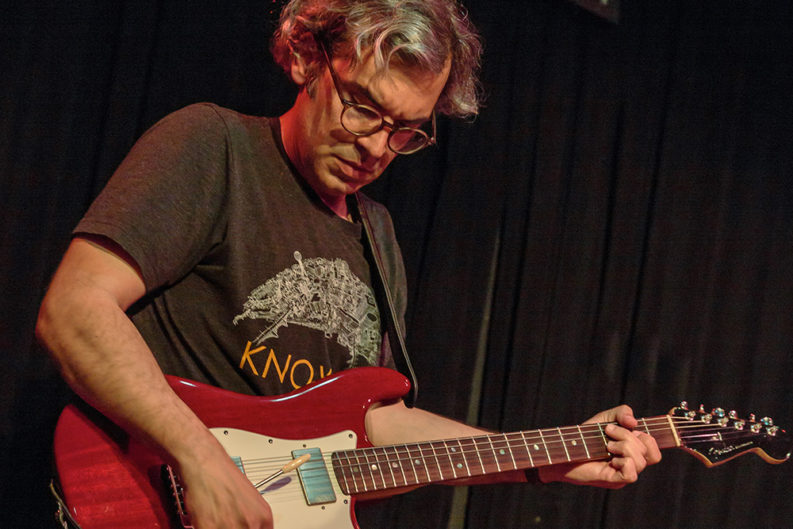 For the last couple of years, the guitarist Mike Baggetta has been performing instrumental, improvisational interpretations of songs made famous by Patsy Cline. The experiment, which he performed in Knoxville earlier this year, was a self-imposed challenge for Baggetta—a measure of his playing against the music he loves, jazz guitar against country standards.

“The thing that interested me was to see, can I put my aesthetic on someone else’s music and make it successful?” Baggetta says. “I love her voice, as just a musical voice—it’s so strong, with such a personal identity. I also love the songs. But on top of that, I wanted to see if my idea of how to play music held up outside of my own compositions. You can compose in a way that plays to your strengths, but to me it was important to see if what I consider my strengths hold up on someone else’s music.”

Now Baggetta’s raising the stakes, taking on a contemporary of Cline’s whose music could hardly be more different than hers. Next week, Baggetta and his ad hoc band—bassist Matt Nelson and drummer Nolan Nevels—will perform an hour-long set of music by Ornette Coleman as part of the Knoxville Jazz Orchestra’s Jazz Lunch series.

Coleman is best known for his landmark 1961 album Free Jazz, released the same year that Cline had hits with “Crazy” and “I Fall to Pieces.” Free Jazz is a half-hour swirl of heady free-form improv delivered by some of the finest and most forward-thinking horn players of the day—Coleman, Don Cherry, Freddie Hubbard, and Eric Dolphy. It defined Coleman’s career for more than half a century.

He never stopped exploring—his career lasted until his death, in 2015, and included excursions into orchestral jazz, funk, fusion, and world music, a MacArthur Fellowship genius grant, an appearance at Bonnaroo, and a Pulitzer Prize. But Coleman’s reputation has always been linked, especially among casual jazz listeners and die-hard traditionalists, to Free Jazz and the out-there avant-garde jazz movements that followed. During the 1970s, Coleman was often dismissed by critics. In the 21st century, though, he’s claimed a position as one of the most important and influential voices of post-1950s music.

“Ornette has been one of those touchstone musicians in my life,” Baggetta says. “I love the idea of his aesthetic, changing the way jazz was thought about—‘Maybe you can play anything over this stuff, maybe it doesn’t have to be this way’—and causing a lot of controversy. I love it when somebody discovers something new.”

Appropriately, don’t expect straightforward renditions of Coleman’s music at the tribute concert. Baggetta and his bandmates will use Coleman’s compositions as a framework for their own improvisation and exploration.

“What I wanted to go into this concert thinking about was to not necessarily play the compositions the way people might be familiar with them, or the way they were recorded by Ornette and his band, but to take the aesthetic of his music and try to translate that in a way that the three of us could communicate with,” Baggetta says. “So maybe not being true to the recorded version but being true to the aesthetic of Ornette Coleman as a musician.

“Trying to figure out how to do that and how to talk about it with the guys I’m playing with—and to feel like we’re doing something interesting with it—was the biggest learning experience for me.”

Baggetta has performed in Knoxville a handful of times over the last two years, but the Coleman tribute show will be his first notable headlining show since he officially settled here. After several years as a professional musician in New York, he welcomed the opportunity to move here with his girlfriend this summer.

“It got to the point where we didn’t want to do a long-distance relationship and she didn’t want to move to New York, which I understand,” he says. “It’s kind of a weird place to live. I felt like the day-to-day was getting to me and I could take a break. I really like it here—I actually love it here. It’s a cool city with a great music scene—and everybody’s nice.”

Mike Baggetta performs the music of Ornette Coleman as part of the Knoxville Jazz Orchestra’s Jazz Lunch series at the Square Room (4 Market Square) on Wednesday, Dec. 7, at noon. Admission is $15.