Catching Up With Two Big Development Projects: The KUB Building and Kern's Bakery - The Knoxville Mercury

As renovation work is set to begin on one of Gay Street’s last big eyesores—the former KUB building with the shiny green bricks—it raises an interesting dilemma for downtown developers: What’s next?

The city’s interior stock of non-reused historic structures is beginning to dwindle. One of the last remaining opportunities is the empty Tennessee Supreme Court building at the corner of Henley Street and Church Avenue. The city bought the 1.7-acre property and its 1950s-era Art Deco expanse last year for $2.47 million. It’s an important block in the continued development of downtown, says Dawn Michelle Foster, city development director.

“It hinges right there between UT and downtown—the whole vibrancy of that corner is important to us to link to the rest of downtown,” she says.

Proposals for the building were submitted to the city by Knoxville-based Marble Alley, Dover Development, Commercial and Investment Properties, and Nashville-based BNA Associates. The city declined to release any of the proposals—which must meet city specifications for mixed uses of retail, commercial, and residential development—citing a statute that allows city procurement efforts to proceed in private during negotiations.

“The RFPs do not become public records until a proposing company is selected and a contract is prepared and on City Council’s agenda for approval. That’s to allow local governments the flexibility to negotiate contracts and terms with vendors,” says city spokesperson Eric Vreeland. Depending on negotiations, city officials hope to have the final recommendation in the hands of City Council by the end of January.

Right now, at the corner of Church and Gay Street, contractors have begun interior demolition work at the old KUB building, built in the 1920s and soon to be the new Tombras Group headquarters.

“This is one of the last few that can be done,” says project architect John Sanders of Sanders Pace Architecture. “There are not that many buildings left to renovate [downtown].”

There are about 130 renovated buildings in the downtown area, Sanders says. The decline in historical building stock may prompt more construction downtown. Once there are no more buildings to renovate or rehabilitate, “after that you’re going to have to start building new,” he says. “It will increase density is what it does on an urban scale.”

The waning stock of old buildings has also opened up other parts of the city to the historical renovation boom. Development is already moving north of downtown and south of the river, especially along Sevier Avenue. On Chapman Highway is another closely watched project: developer David Dewhirst’s revamp of the 1930s-era Kern’s Bakery building. Will it show the way forward in continuing Knoxville’s redevelopment boom?

Here’s the latest from each of these high-profile projects. 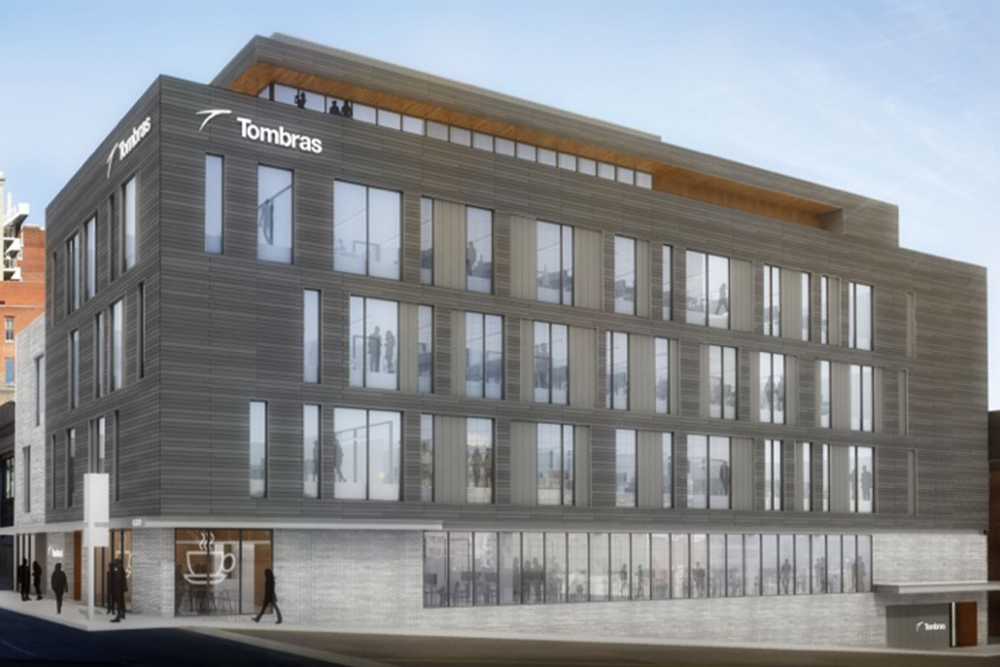 Charlie Tombras, owner and president of the ad agency, says the rebirth of downtown prompted his company’s estimated $10 million investment in the center city.

The Tombras headquarters will be housed in a smooth concrete-slat and brick building—with ample floor-to-ceiling glass—that will take about a year to complete. Tombras will relocate some 250 workers from its current complex on Concord Street to the new headquarters at the corner of Gay and Church streets. The 70-year-old Knoxville-based ad agency has billings of $160 million annually, and has offices in Washington, D.C., Nashville, and Louisville, Ky. Michelin and McDonald’s are among its clients.

Sidewalk closures and other inconveniences should be minimal in coming months as work begins in earnest on the five-story, 54,000-square-foot structure. The building, mid-modern in its last iteration, has been renovated at least three times over the past 90 years, and is actually a collection of three buildings and three different construction types. 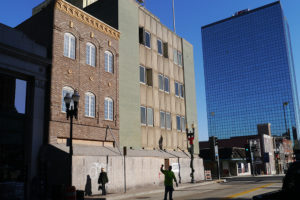 The former KUB building—almost universally agreed upon as being the ugliest downtown—is about to start getting a major revamp into the new headquarters for Tombras Group.

“It’s kind of a Frankenstein sort of structure,” Sanders says while standing in the dusty interior, where work is under way. Interior designs include a two-story lobby and a separate two-story production studio. Gone will be the infamous green exterior of the building, and the narrow windows will be replaced to capture more natural light.

The building will be 100-percent commercial, though with a casual feel: Two outdoor patios will occupy the structure’s rooftops near an employee break center. The modern amenities and sleek renovations will provide those employees “a premier work space in what is now a vibrant downtown,” Sanders says.

Tombras credits both the private and public sector with making downtown so amenable for his and other businesses, but would like to see more major employers centered in the center city. He says his company will bring 225-250 new workers downtown when construction is complete in December 2017. Work continues on the new Regal office complex, which should bring another 350 downtown jobs across the river.

The renewed vitality and vibrant restaurant and retail community downtown makes a good recruiting environment for the creative class, Tombras says, especially those hailing from major cities such as Los Angeles, New York City, and Chicago.

“The first thing they want to do is see downtown,” Tombras says. “That’s where the vibe of the town starts and goes from there.”

Multiple dining and lodging options will be within walking distance of the new headquarters, which will itself include a public Tombras-branded coffee shop on the corner.

“It really (was) more appealing to renovate an existing structure,” he says. “We don’t want to be perceived as becoming too corporate in appearance.
“I think community leaders have done a great job to revitalize and make our downtown a really cool place,” he adds. The project qualified for tax-increment financing of some $3 million from the city.

Across the Tennessee River, not far from the Regal complex and the Urban Wilderness, Dewhirst—who for a time held a separate stake in the old KUB building—is still dreaming of what may come. 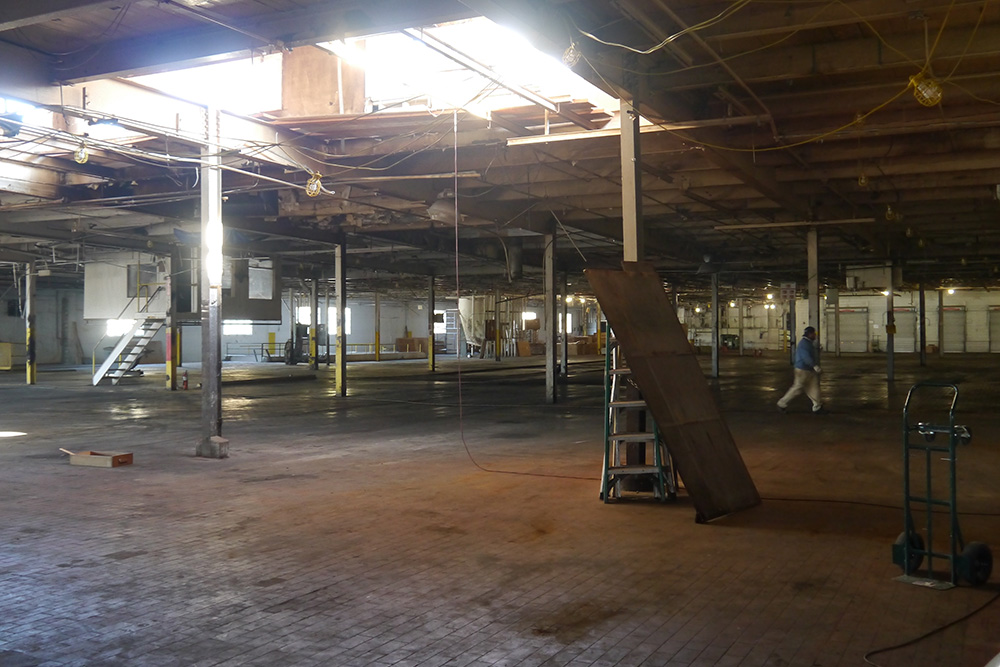 First, the building’s enormity engulfs you. Then you notice the relics: A battered time clock. A sign admonishing “Hairnets beyond this point.” Posters depicting potentially disastrous bread-packing outcomes. A painted farewell to the building—“Goodbye old girl.”

Interior work has so far cleared both time and space from the Kern’s bread factory built in 1931; it was last occupied by Bimbo—a Mexico-based baked-goods business—for use as a distribution facility. Dewhirst and his partners in the deal acquired it in 2015.

“As you get in a building and begin to clean it out, you begin to see the real structure, how it was used in the past, and what is interesting about it,” he says during a phone interview.

At 77,000 square feet, it’s the third-largest project Dewhirst Properties has taken on. And the space yields so much possibility, he hasn’t yet arrived at a conclusive end-game for the 14-acre property at 210 Chapman Highway.

“Right now we are looking toward developing the most broad array of interesting options we can,” he says, but most if not all options entail a tie-in to the Urban Wilderness.

His first priorities are to finish gutting the building, and get it well-lighted and landscaped.

And his plans for the property might yield a few surprises as he thinks—and rethinks—outside the box.

“You have to approach that little bit of insanity in an analytical manner if you want to pull it off,” he says.

While there is obviously great interest from restaurateurs—he foresees “amazing pedestrian build-in” along the waterfront—his company is “striving for the most interesting and interactive solutions we can come up with. Simultaneously, they have to be bankable,” he adds, meaning attractive to both investors and loan officers. 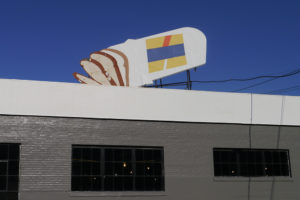 His options are vast, given the interesting and historic nature of the building: The now-dormant illuminated Kern’s sign and the facade itself are Knoxville institutions; there are bow-string trusses in the freight-dock area; a Quonset-hut structure is attached; and the structure has riveted columns.

“This is really rich because these materials are thick and beefy and well-done,” he says.

The Kern’s project, like the Tombras headquarters, also received some help from the city: Dewhirst received a $200,000 grant from the city to apply toward renovation of the historic property for a mixed-use project.
The public investment is a good one, says Dewhirst, who paid, with his partners, $625,000 for the combined parcels—especially if it protects historic buildings that may otherwise be demolished for less-intensive uses. He plans to announce details of the project’s scope, which will likely include “an outdoor recreation theme” that connects with the nearby Urban Wilderness, within the next year.

“Old buildings are authentic and come with a lot of character,” he says. “How many people walk in a new suburban bank building and say, ‘This is so gorgeous I’d love to have dinner here?’” 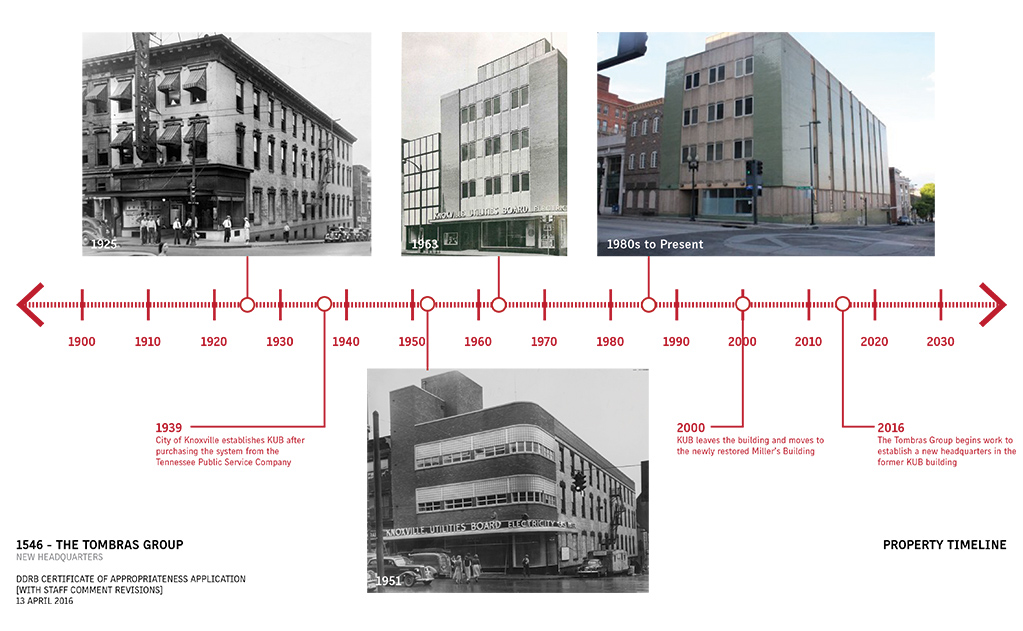