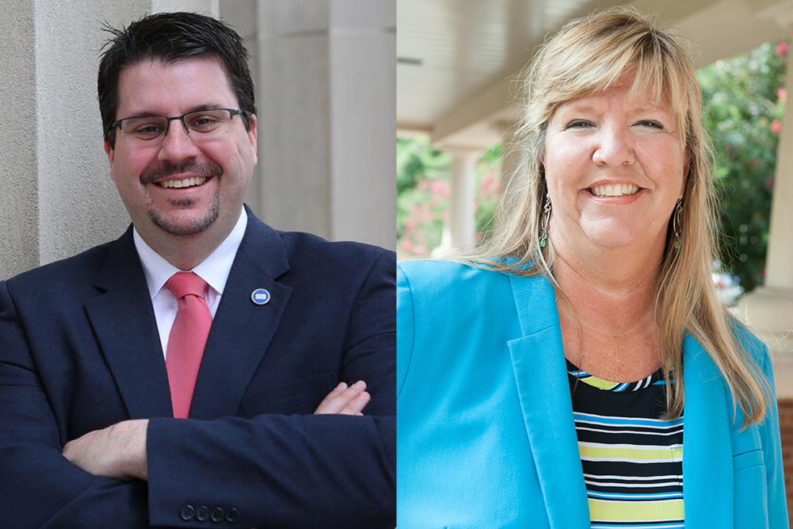 Remember those predictions that Donald Trump might have a negative effect on local races further down the ballot by inspiring Republicans to stay home on election night? Well, the exact opposite happened in the 13th District House race. Democrat Gloria Johnson blames lower-than-expected turnout among district Democrats in her 154-vote loss to Republican incumbent Eddie Smith. Johnson conceded the 13th District House race to Smith late Monday morning after learning there weren’t enough provisional ballots in the race to change the outcome.

This marked Johnson’s second excruciatingly close loss to Smith. Smith beat her by 182 votes to win her seat in 2014. The result was similar this election, though 10,000 more ballots were cast in the district than in 2014.

Johnson says she plans to meet with Smith next week to discuss the race and the issues that were raised. She also blames unrelenting attack ads funded by the state GOP and its allies as a reason for her defeat.

“We are going to have to review everything,” she says during a telephone interview this week following her concession. “Turnout was an issue. Democratic turnout wasn’t as great as it should have been.”

In Knox County, 184,778 people voted (not counting the provisional ballots), upwards of 10,000 more than in 2012. Turnout was still about 4,000 less than the record turnout in 2008, when President Barack Obama was elected to his first term.

Johnson says Democratic enthusiasm was squelched in the final days of the race by two announcements from Federal Bureau of Investigation Director James Comey referencing accusations that Democratic presidential candidate Hillary Clinton had deleted public emails and stored classified information on a private server. Clinton herself blamed Comey for her loss to Republican Donald Trump, who crushed Clinton across Knox County with 59 percent of the vote. Other Republican state House incumbents in the county, including Reps. Martin Daniel and Roger Kane, cruised to easy reelection.

Johnson says attack ads on behalf of her opponent were also a factor in her defeat. “Negative mailers suppress the vote,” she says, despite her pushback against mailers that, in one instance, featured her face superimposed upon that of a “creepy clown” with background information she called false.

Still, she muses: “That’s politics. … I’m going to organize and fight for the issues people care about.”

Smith declared victory late in the evening of Nov. 8.  “Earlier today my opponent called and conceded the race,” he says in a statement emailed on Monday. “I thanked her for a well run race and a vigorous campaign. With this, we move on to the real work, governing. I look forward to the legislative session resuming in January, and us continuing to make Tennessee the best place to live, work, and play in the country.”

A review of data from the 17 precincts in the 13th District indicates Smith did very well in South Knoxville and the county. Johnson carried reliably liberal districts in the city, though Smith was able to carve out Sequoyah Hills and some surrounding neighborhoods in his favor by a razor margin of 30 votes out of 2,198 votes cast in the race.

Clinton won the precinct with 52 percent of the vote there. That’s the only precinct that both Smith and Clinton won. Elsewhere, as went Clinton, so did Johnson, and all other precincts in which Smith was victorious all broke for Trump.

Both Johnson and Smith won their home precincts.

Smith performed best in the University of Tennessee and South Doyle precincts, with 78 and 73 percent of the vote, though only a paltry 69 votes were cast in the race at UT.

Johnson garnered 73 percent of the vote in Lonsdale; 62 percent in Bearden; and 58 percent at the Chickamauga precinct in North Knoxville.

Johnson delayed her concession until provisional ballots were tallied. The Provisional Ballot Counting Board for Knox County met Monday morning and determined that only 86 of the 597 provisional ballots were cast in the District 13 race. Smith earned 11,160 votes to Johnson’s 11,006 in the unofficial results of regular voting. That means that even if all the provisional ballots in the district turn out to be legitimate votes—and all those voters chose Johnson—it still wouldn’t close Smith’s 154-vote lead.

Knox County Administrator of Elections Cliff Rodgers says it may take until next week for election officials to check all the provisional voter registration records to be sure which should count. Legally, the county has until Nov. 28, when the election must be certified, but “I’m as ready to be done with it as everybody else,” Rodgers says.

Provisional votes are cast by people who don’t appear to be registered in Knox County or don’t have photo identification. Those without photo ID have 48 hours to produce it so their vote can be counted. The others are researched with state election rolls to find out if they weren’t registered, were registered in another county, had been purged from voter rolls after not voting in multiple elections, had felony convictions that stripped their voting rights, etc.

“Based on past experience, I’d be surprised if half those (provisional ballots in District 13) are able to be counted,” Rodgers says. He added that in Knox County—contrary to popular wisdom—provisional ballots don’t usually skew Democratic, but tend to reflect the same party split as the broader results.

Of the total provisional ballots, only 56 involved lack of photo ID. Six of those were counted after the voters returned with identification, Rodgers says. The ballots eliminated for lack of a photo ID are never opened, so he doesn’t know whether those tend to favor a particular party. Nationally, Democrats have argued that voter ID laws tend to have the biggest impact on poor minority voters who are more likely to vote for Democrats.

Johnson filed an injunction in Knox County Chancery Court on Wednesday, demanding access to the names of people who cast provisional ballots because she wanted to help people who lacked ID on election day to get their votes counted. The lawsuit, which named the election commission and Rodgers, said that Rodgers had refused to produce the list of names or open the locked box of provisional ballots to create a list.

Rodgers says state law prohibits him from opening the provisional ballots except in the presence of the counting board. “She asked me for a list I don’t have,” he says.

Normally, the counting board meets following the 48-hour window in which voters can produce their IDs belatedly, Rodgers says. But because Friday was a holiday, the board couldn’t meet until this week. The board is composed of members of the two major political parties, who are approved by the election commission—usually the same people who count the absentee ballots on election night.

Overall, Rodgers says this election went more smoothly in Knox County than did the last Presidential election, largely because 75 percent of voters took advantage of the greater number of early voting locations with longer hours. Unlike on Election Day, when voters can only vote at their precinct, there’s no wrong place to vote during early voting, which eliminates a lot of confusion and difficulty, Rodgers says.