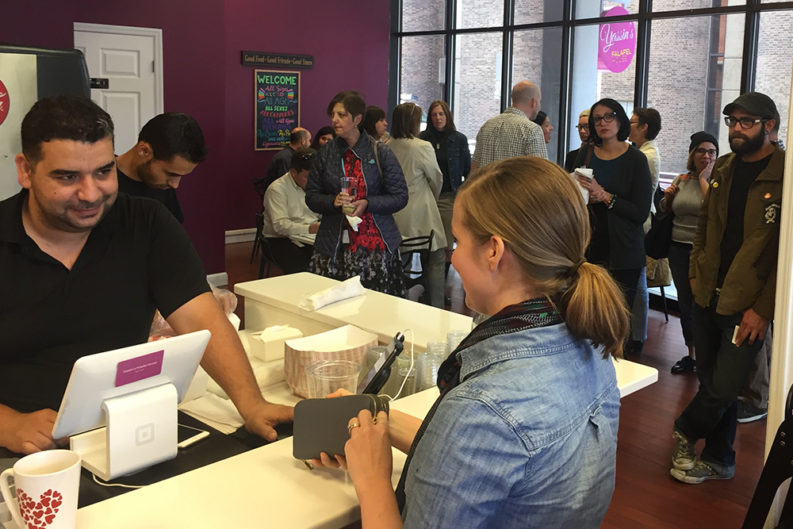 As the results of the U.S. presidential race rolled in early Wednesday morning, Hannah Houser was feeling hopeless. She thought of Yassin Terou, the bubbly Syrian-American owner of Yassin’s Falafel House on Walnut Street. “I was thinking, what’s a good way to make everyone remember they’re loved and welcome in Knoxville?” she says. “And Yassin always makes me feel that way.” So she used Facebook to invite all the other Knoxvillians who agreed to come to Yassin’s for a Love Trumps Hate Lunch to share the message of solidarity and respect while helping the Syrian immigrant’s business.

“No matter what side the vote you’re on, last night made a lot of people very nervous and wonder what the future is going to hold,” Houser said while waiting for her falafel last week. “This is a way to say we’re here, and we support you, and we’re walking with you.”

Trump won 59 percent of the vote in Knox County. The minority of Knox County residents who opposed Trump’s candidacy have grappled for the last week with how to shape their anger, fear, or unfocused energy into a positive force. Many say they are especially motivated by Trump’s stated campaign promises to ban Muslims, halt immigration, build a wall on the Mexican border, focus on deporting illegal immigrants, and ban abortion. In addition, Trump’s comments about women, reports of his sexual assaults, his mockery of a disabled reporter, and his broad appeal to white racists (including the Ku Klux Klan, which has publicly celebrated his win) have alienated progressives.

Several anti-Trump protests were held downtown or on the University of Tennessee campus, but another was canceled because organizers feared retaliatory violence. Houser’s simple Facebook event has expanded into the creation of several community groups focused on finding ways to support progressive causes and marginalized community members.

The largest is Love Trumps Hate: Knoxville, founded by Houser soon after the Yassin’s lunch. After almost a week, the group had close to 7,000 members on Facebook. Houser and other coordinators plan to meet soon to discuss concrete goals and service opportunities arising from the group, which has also spawned some neighborhood-based groups like South Knox United. The group plans its first in-person meeting to talk and sign up for service opportunities at Tyson Park from 11 a.m. to 2 p.m. Sunday.

The Love Trumps Hate: Knoxville Facebook page is becoming a clearinghouse for people offering their skills to local nonprofits like Bridge Refugee Services and to individuals such as a Syrian college student who needs legal help to extend his residency. The group has begun compiling a list of minority-owned businesses for locals who want to support them and discussed the possibility of a Love Trumps Hate food tour to encourage dining at local immigrant-owned restaurants.

A similar but somewhat more political Facebook group, Love Trumps Hate: UT, has shared information about Trump protests at the university and about an altercation that occurred at The Rock between minority students and Trump supporters. The UT group canceled a rally it had planned for Monday, citing concerns about Trump supporters’ “extreme reaction to peaceful protests” and saying that one of the group administrators had been physically harmed.

In the wake of incidents at other universities, where female Muslim students were stripped of their hijab head coverings and other minorities were attacked, UT students and some faculty have also volunteered to escort anyone afraid of walking across campus alone, using the Twitter hashtag “GoWithMeUT.” A Twitter search doesn’t turn up any actual requests for help using the hashtag, although it was used to share many offers of assistance.

Off campus, many say they are moving beyond their initial fear and resentment to action. Terou says his restaurant has seen three times its usual business in the last week as people, mostly non-Muslims, continue to show their support. He feels much better than he did Wednesday. “I was very scared in the morning, very sad. I had this moment of, Should I go to work?” He says he looked down at his 3-month-old daughter, born American but named in honor of his home city of Damascus. “I saw her. And I said yes.’”

Although Knoxville’s Muslim community was frightened and shocked that day, and many women were afraid to leave their homes, Terou says they have since been encouraged.

Flowers started turning up outside the Masjid Annoor mosque in Knoxville. One bouquet was accompanied by an anonymous note stating: “I, and many others in Knoxville, stand with you. I am sorry about the results of the presidency. Our love for you is boundless. Please stay strong in these uncertain times.”

“It’s time to forget what Trump was saying about minorities and about hate and to build a new bridge of love,” Terou says. But he’s also torn. “How can I teach my 6-year-old you have to respect everybody, no matter what they believe, when she hears everybody talking about her on TV?” Terou asks himself. He shakes his head. “I just want to tell my people we can never stop the love. We are under one flag now. We have to build our country. There’s no other option.”

A week after the election, Terou has a lot of new customers. People have offered to escort his wife and anyone else wearing a hijab around downtown as protection. Many people have come in to his restaurant wearing safety pins to show that they are willing to intervene to protect the safety of minorities and women.

As the safety pin symbol gains recognition, several artists at Purple Heart Tattoo are offering safety pin tattoos on Friday. They emphasize that the tattoos are intended as a message about safety and human rights rather than as a political statement about Trump—but that nevertheless, those who choose the tattoos may become targets.

Terou says he knows of only one ugly comment or action toward anyone in Knoxville’s Muslim community this week: A woman yelled at someone’s elderly mother to “go back to your country.” With a chuckle, Terou says his friend’s mother just hollered the same thing back. (After all, anyone who isn’t Native American comes from an immigrant family.)

“I thought the election might affect minorities and Muslims in the short term, but we got together and we are stronger than ever,” he says. “In the long term, if something should happen, I think it will make us stronger. That’s the good thing about Knoxville.”

Ghada Ayesh, who stopped at Yassin’s for lunch the day after the election and took a turn holding Terou’s daughter, also took a positive stance. “Regardless, we support the country,” she says. “Living in diversity and being one family is the important thing.”