Blount Mansion, and the Dawn of Preservation - The Knoxville Mercury 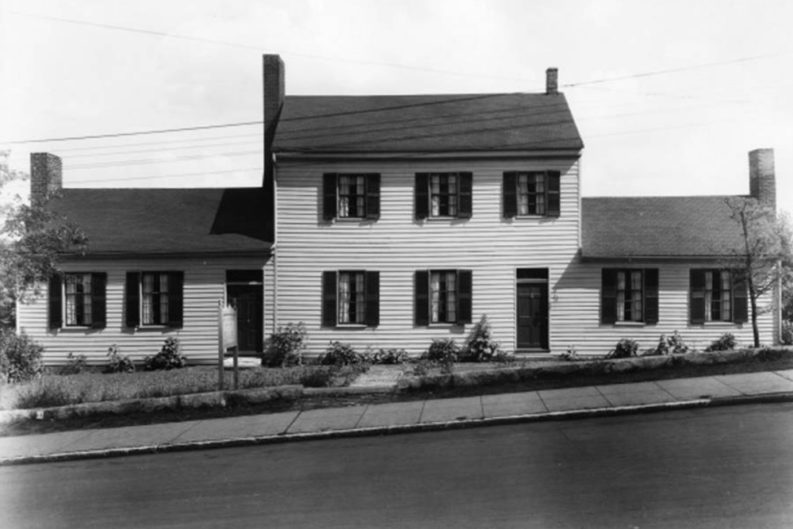 This fall is the 90th anniversary of a watershed moment in historic preservation in Knoxville.

In 1925, developers were planning the largest hotel ever built in East Tennessee, prepared in anticipation of the popularity of the Great Smoky Mountains National Park. Their much-hailed project, later to be known as the Andrew Johnson Hotel, overshadowed a small house that had been famous more than a century earlier. This frame house in poor repair was only barely remembered as the former home of territorial Governor William Blount (1749-1800), whose influence once stretched to the Mississippi River. A signer of the U.S. Constitution, Blount was also one of Knoxville’s founders. His wife, Mary Grainger Blount (1761-1801), reportedly insisted on the frame design of the house, with proper glass windows. It stood out among the log cabins and rough-hewn shacks that dominated 1790s Knoxville.

However, by 1925, its plot of land, at the corner of State Street and Hill Avenue, was suddenly interesting to developers only for its acreage. Developers who may not have understood the house’s historical importance announced it would be down to make a parking lot for the new hotel.

A group of preservationists led by the Daughters of the American Revolution chose to take a stand unprecedented in Knoxville.

Before 1925, historical buildings were almost always torn down without much fuss. A few years earlier, UT had torn down its original 1828 building, Old College. Despite efforts to save it as a memorial park, the last vestiges of famous Union Fort Sanders disappeared in the ‘20s. Although Knoxville had once advertised it as a historic site, Parson Brownlow’s famous house on East Cumberland was torn down about the same time, as was an old tavern believed to have served as Tennessee’s first capitol.

A similar fate almost befell the old Blount house, the oldest frame house in the region.

Leading the charge to save it was Mary Boyce Temple (1856-1929). Daughter of historically influential judge and author Oliver Perry Temple, she had led a privileged life, graduating from Vassar, the famous old women’s college just north of New York City, and traveling extensively around Europe. She had served as a commissioner representing Tennessee at the 1900 Paris Exposition. She organized the local patriotic organization Daughters of the American Revolution. She never married, but enjoyed a full life at the top of Knoxville society, and was a major supporter of the University of Tennessee, even though as a woman she would not have been permitted to attend until she was almost 40.

Temple was living in her home on Hill Avenue near Henley—recently renovated as a private residence, it still stands—when she heard of the likely fate of her down-the-street neighbor, Blount Mansion. As president of the DAR, she got that organization involved. According to the story, it was Temple’s personal check that saved Blount Mansion from the wrecking ball.

But it became part of a broader-based effort that included Nashville state historian John Trotwood Moore and local historian E.E. Patton, who later became Knoxville mayor. In what was called the “Blount House Whirlwind Drive for Dollars,” hundreds donated, some as little as one dollar. (Although the term “Blount Mansion” began appearing during the fund drive, most called it “the Blount House” or “the Blount Home.”)

Men and women pitched in to fix up the old house as they imagined it looked in the 1790s, when William and Mary Blount lived there, discovering an original mantel and restoring the once-famous rooms as they had been during the presidency of George Washington. They even tried to restore the Blounts’ gardens. “When spring comes,” a reporter predicted in fall, 1926, “fragrant lilacs will perfume the evening air, and hollyhocks glow in the noonday sun.”

Today, Blount Mansion operates as a museum. It’s Knoxville’s only National Historic Landmark, a designation from the National Park Service that offers legal protection. A foundation, the Blount Mansion Association, funds maintenance of the house and grounds.

The Blount Mansion preservation effort of the 1920s marked the beginning of effective historic preservation in Knoxville. Knoxville’s oldest house will be the subject of Knox Heritage’s monthly Lost and Found Lunch this Friday, Nov. 18, at their headquarters at Historic Westwood, 3425 Kingston Pike. Preservationist scholar David Hearnes, who became executive director of the Blount Mansion Association last year, will be speaking on the formation of that organization. The event is free, and even comes with a free lunch.