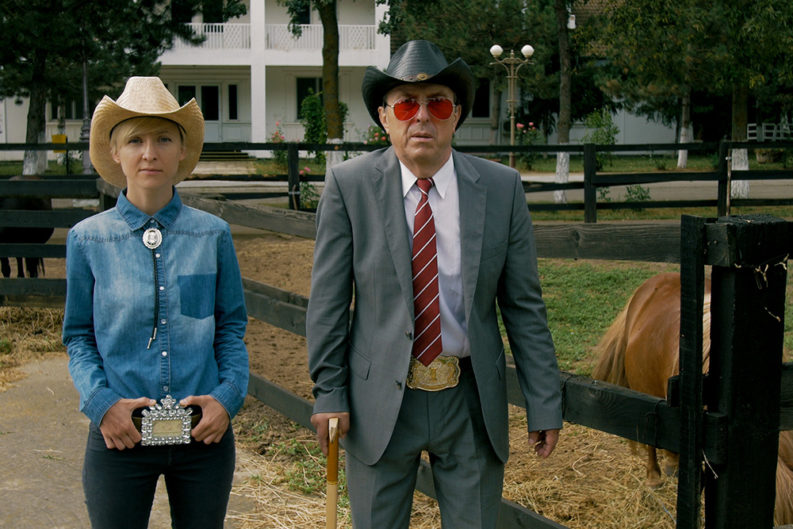 In 1978, Dallas, one of the longest-running American primetime drams, premiered on CBS. The show became a hallmark of 1980s television, one of the most iconic of the era’s many primetime soaps. For 14 seasons, Dallas charted the exploits and entanglements—business, familial, romantic, and otherwise—of the Ewings, a wealthy Texas oil family.

American viewers weren’t the only ones to follow the Ewings closely through all their dirty deeds, dream seasons, and cliffhanger episodes. In 1979, Dallas premiered in Romania, a country then struggling to stake out its own identity between the twin poles of Western and Eastern influence. Despite the strict limits set on the influx of Western cultural products by Romanian Communist Party leader Nicolae Ceaușescu, communist Romania enjoyed the importation of American TV programs until the early 1980s. Dallas played on Romanian television for four seasons, until living conditions in the country plummeted and funding for rights to the series dried up.

After Romania opened back up to the West in the 1990s, Dallas aired in full and uncensored, once again becoming a massive hit with Romanian audiences. In particular, the scheming and dirty dealing of J.R. Ewing resonated with Romanian businessmen, many of whom modeled themselves after their favorite American robber baron.

The new documentary Hotel Dallas, from filmmaking couple Livia Ungur and Sherng-Lee Huang, focuses on Dallas’ impact and influence on Romania. The titular “Hotel Dallas” is the Hermes Ranch, a luxury resort designed by corrupt vegetable-oil tycoon Ilie Alexandru, the so-called “J.R. of Romania,” who was imprisoned for fraud and tax evasion in 2000. In addition to a replica of the Southfork homestead from Dallas, his ranch also includes a scale model of the Eiffel Tower.

The story of the Hermes Ranch and its owner are only a departure point into deeper subjects for Ungur and Huang. The couple runs a little loose with the facts, reinterpreting key scenes from Romanian history in the style of Dallas and casting Ungur’s father in the role of Ilie Alexandru. Though the film includes interview segments with Romanian citizens about their memories of both Dallas and life under communism, Hotel Dallas is less concerned with a strict recreation of the past than it is with how we remember and commemorate it. Hotel Dallas might be better described not as a documentary, but as a dream journal, a record of half-remembered recollections of a country and time that no longer exist.

Hotel Dallas feels specifically cathartic for Ungur, who was born in Romania the same year that Dallas premiered there. In 2004, after winning the United States’ annual green-card lottery, she moved to New York City; eventually she married Knoxville native Sherng-Lee Huang, her creative partner. To have grown up in a country that, for all intents and purposes, no longer exists, to have a feeling of a place but not a clear view of it, is an experience that’s hard to comprehend. The intimate nature of Hotel Dallas allows for a greater understanding of that emotional and mental state.

Dreams are essential not only to Hotel Dallas but to Dallas itself; Bobby Ewing, the noble and beloved younger brother of J.R., was brought back from the dead after season nine of the series was revealed to have been a dream. In order to retell her own journey, Ungur and Huang cast Patrick Duffy, who played Bobby, as a version of himself. As Ungur guides Duffy across Romania, the two move backward in time, Duffy attempting to find his way home to Dallas. We weave in and out of different eras, formats, languages, and film genres on the journey. Duffy’s appearance might be odd and unexpected, but the familiarity of his voice lends the film an added poignancy, while also underscoring its more surreal qualities.

Hotel Dallas is a number of things, but a strict or standard work of documentary film is not one of them. It is simultaneously an ode to a gilded TV drama from a now bygone age, a conversation about life under communism, a behind-the-scenes featurette, and a musical about vegetable oil. In the film’s most successful sequence, Ungur and Huang even remix and recontextualize footage from the 1947 John Wayne Western Angel and the Badman.

But more than all this, Hotel Dallas is a film about the slippery nature of our own memories. Ungur and Huang attempt to look at not only the larger world, but the private sector of their own experiences, through more than the stained-glass television set we often recall our lives through. Memories are like the food in your mouth; the taste only lasts while you’re chewing. Hotel Dallas tries to hold on to the flavor a little longer.

The Public Cinema presents Hotel Dallas at the Knoxville Museum of Art (1050 World’s Fair Park) on Sunday, Nov. 13, at 2 p.m. Admission is free.

CORRECTION: An earlier version of this story misspelled the name of one of the codirectors of Hotel Dallas. It is Livia Ungur, not Ungar.