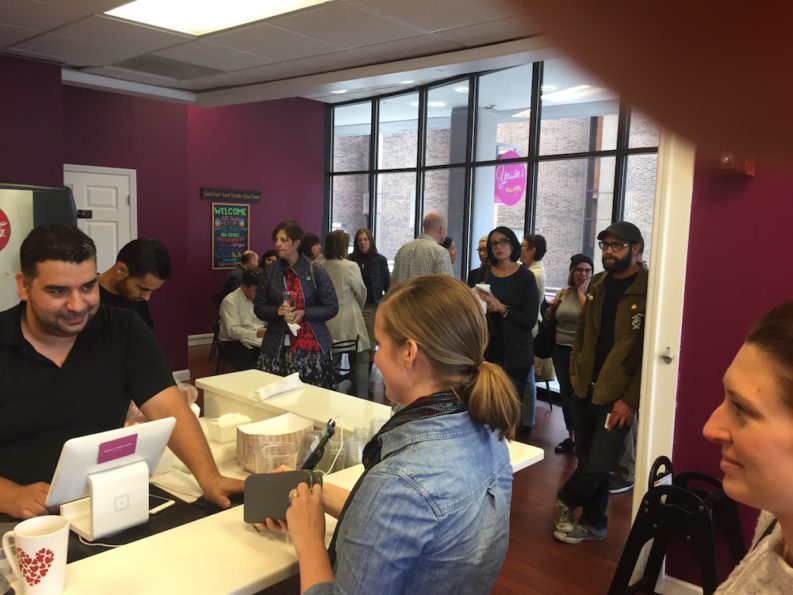 As the results of the U.S. presidential race rolled in early Wednesday morning, Hannah Houser was feeling hopeless. She thought of Yassin Terou, the bubbly Syrian-American owner of Yassin’s Falafel House on Walnut Street.

“I was thinking, what’s a good way to make everyone remember they’re loved and welcome in Knoxville?” she says. “And Yassin always makes me feel that way.”

So she used Facebook to invite all the other Knoxvillians who agreed to come to Yassin’s for a “Love Trumps Hate Lunch” to share the message of solidarity and respect while helping the Syrian refugee’s business.

“No matter what side of the vote you’re on, last night made a lot of people very nervous and wonder what the future is going to hold,” Houser said while waiting for her felafel. “This is a way to say we’re here, and we support you, and we’re walking with you.”

By 1:30 p.m., business was four times what Terou says he usually sees at lunch, with 90 percent of customers neither Arab nor Muslim. He brought his 3-month-old daughter out in her footie pajamas to see the crowd.

Terou stayed up half the night only to see a man who has vowed to “ban Muslims” win the election. “[The Muslim] community is very scared. A lot of women today are staying home,” he says. “People were in shock.”

Terou says Alan Sims, of the Inside of Knoxville blog, came to him crying and saying, “‘It’s not all of us. We are not all the same.’ I saw him, and I decided to be strong.”

Terou turned on music outside the restaurant and opened up with a smile.

“It’s time to forget what Trump was saying about minorities and about hate, and to build a new bridge of love,” he says. But it’s hard. “How can I teach my 6-year-old you have to respect everybody, no matter what they believe, when she hears everybody talking about her on TV? I just want to tell my people, we can never stop the love. We are under one flag now. We have to build our country. There’s no other option.”

Ghada Ayesh, who stopped in for lunch and took a turn holding Terou’s daughter, also took a positive stance.

“Regardless, we support the country,” she says. “Living in diversity and being one family is the important thing.”

Houser would like to help build those bridges, too. She says she hopes to talk with Terou about ways to create a safe space for people to come together, from those who feel marginalized to those “at the height of privilege.” She says Terou is a great example of someone achieving their dreams against the odds.

“You have to recognize and respect that, and not vilify an entire group of people without meeting people face to face.”

UPDATE: Late Wednesday, Houser created a Facebook support group called Love Trumps Hate, intended to a “refuge of community healing and mobilization for marginalized persons in Knoxville and their allies.” Within 12 hours it had 1,969 members. The group will offer a “safe space for shared personal stories,” a platform for offering and accepting volunteered goods and services, and a venue for creating and sharing community events which make marginalized people feel welcome. (The page specifically states it is not a venue for intense political discussions.)

Already members of the group have been sharing information about community organizations that need volunteers, creating a list of local businesses owned by immigrants, and kicking around ideas for events. Among them: A Love Trumps Hate Food Tour, dining at immigrant-owned restaurants. And on Saturday, a second “Healing Lunch” is planned at Yassin’s from 11 a.m. to 3 p.m., with opportunities to network and brainstorm other activities.