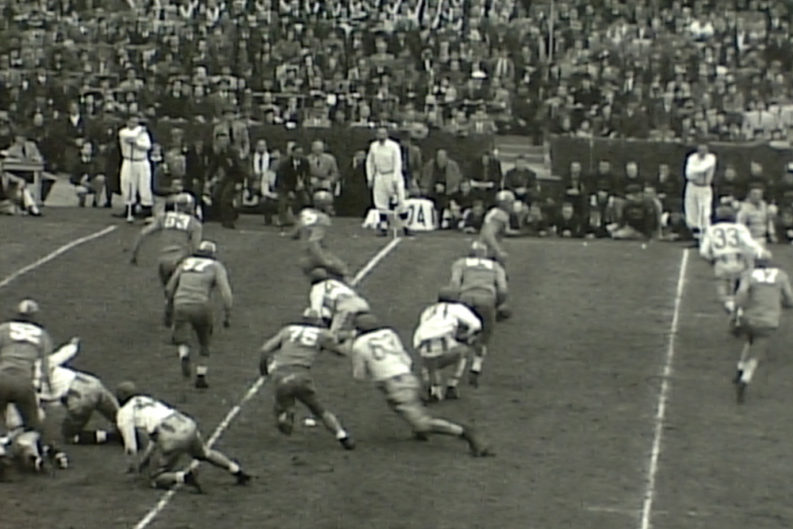 Read the first part of this story here.

Several years ago, a VHS transfer of some old 16mm film came to the Tennessee Archive of Moving Image and Sound, courtesy of a member of the local Coca-Cola bottling Roddy family. It’s an hour-long assemblage of footage documenting the Tennessee Vols trip to Pasadena to take on the USC Trojans in the 1940 Rose Bowl, accompanied by a group of some of Knoxville’s more well-heeled fans.

On Dec. 21, 1939, 1,500 people turned up at the Southern Terminal depot to see the team off. The Volunteer Special made several stops on the way to California, allowing the team members to stretch their legs and practice. (The Jim Thompson collection also has a few glimpses of the train journey. Presumably more was filmed but has been lost.) Much of the Roddy film is dedicated to the Rose Parade, sightseeing around Hollywood, and a visit to Clarence Brown’s ranch. The quality of the VHS image leaves something to be desired, but it’s still a unique look at an event that merited weeks of News Sentinel coverage. We’re lucky to have it in any form.

TAMIS cofounder Bradley Reeves (who no longer works at the archive) still keeps an eye out for film, audio, and other items of historical value he thinks we might be interested in. Recently he stopped by with a book, 75 Years of Refreshment, by Pat Roddy Jr., a history of the Coca-Cola Bottling Company published in 1983.

The text contains much more than an insider’s look at the soft-drink bottling business. It’s full of photographs and history pertaining to 20th-century Knoxville, including several pages about the Rose Bowl excursion and the author’s filming of it. Roddy was an avid amateur filmmaker who shot Vol football games, edited the footage, and screened the films around town.

Color films of the games, shot by Roddy from the press box at Neyland Stadium, were a regular Coca-Cola promotional item. The films usually began with a message from the company and included frequent shots of the scoreboard, which sported a Coke logo. Film shot on Saturday would be processed in time for Monday night screenings for a group of 10-12 friends, then it would make the civic club and public school circuit.

Seventy-Five Years of Refreshment provides some background information on some of the shots from the 1940 Rose Bowl: the gathering with Clarence Brown took place on Christmas Day, at a party at his ranch in the Arroyo Seco Mountains, 40 miles from Pasadena, with starlets from Paramount and Warner Bros. in attendance; and other locations in the film include the El Paso Sun Bowl, Juarez, Mexico, the MGM backlot, and a boat trip to Catalina Island.

Roddy’s screenings were accompanied by 78 rpm records. He spent hours in his basement “splicing the film to time the music with the action.” He titled this particular film “Westward Ho! With the Volunteers” and held multiple screenings at his home, with new guests coming night after night.

Months after the game, Roddy was still presenting the film to various clubs and civic groups, hauling a screen, projector, film reels, two turntables, and a stack of 78s around. Between 300 and 400 people viewed the film at the ballroom of the Cherokee Country Club. The screenings kept Roddy busy. News Sentinel sports reporter Bob Wilson ran into Roddy buying a peppered beef and gristle sandwich one morning. “I’ve been going to so many luncheons showing the Rose Bowl pictures that I don’t have time to have a good lunch,” the harried motion-picture exhibitor said.

There’s no footage of the actual game in the copy of the film we have, but Roddy writes that game footage takes up one of the feature’s three reels. It’s probably still out there somewhere. Two other 16mm reels documenting the trip and the game turned up a year or so ago. The daughter of famed local wrestling coach Bob Maher found them in an attic, but she isn’t sure who filmed them—maybe an uncle, she says.

The films hadn’t been screened in decades. They’re in great condition, with sharp Kodachrome color. We see with much more clarity up-close footage of the Vols practicing, Hollywood studio backlots, and Clarence Brown and Hollywood starlets hobnobbing with Robert Neyland and the Vols. The details in Roddy’s book illuminate not just the murky VHS footage, but Maher’s pristine film as well. There’s even black-and-white footage of the game.

Tennessee lost the 1940 Rose Bowl to USC 14-0, after an undefeated regular season. I’m sure it was a disappointment to everyone who made the trip, but you can’t feel too bad for them. If you go to the tape, you’ll see everyone having a grand old time.