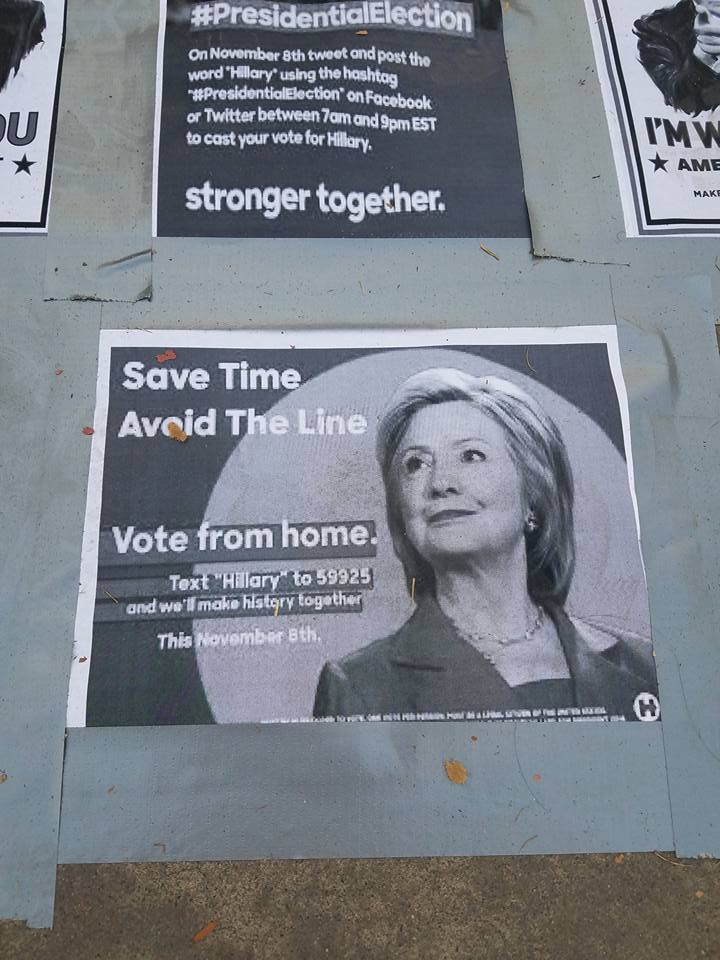 State and local election officials investigated the posting of false voting information this morning outside the Baker Center, the polling place at the University of Tennessee. The UT College Democrats posted photos on Facebook of signs taped up outside the voting location. The signs showed Hillary Clinton’s face and stated: “Save time. Avoid the line. Vote from home,” and then gave a number to which voters could ostensibly text a vote for Clinton.

Tennessee does not offer an online voting or texting option to voters, who must vote in person or with a previously-obtained absentee ballot.

“Obviously we wanted to take care of that immediately, it’s so crazy,” says Cliff Rodgers, Knox County administrator of elections. He says he first heard about the signs when Tennessee state election coordinator Mike Goins called him in the morning after being alerted to them. Because they were false and misleading, Goins told Rodgers to make sure they were removed.

Rodgers says he asked Andrew Roberto, Knox County’s Democratic Election Commissioner, to check it out. By the time Roberto arrived, the signs had been removed, probably by a poll worker, Rodgers says. He declined to express an opinion about who might have put them up, and says he has no plans to investigate further. He says he has not heard complaints from voters about the signs at the Baker Center or heard them reported from other locations.

Rodgers noted that college students could be especially vulnerable to this type of misinformation given that they are more likely to be voting for the first time and have a preference for handling things with their cell phones.

“Voter suppression is always wrong,” says Rynn Dupes, president of the League of Women Voters of Knox County. “I think it’s especially disheartening because a lot of people voting at the Baker Center are likely to be first-time voters, and research has shown that people who vote when they are young are more likely to vote in the future. I imagine if people figure out they’ve been tricked, they’re probably not to going to have a lot of faith in voting in the future.”

Cameron Brooks, chairman of the Knox County Democratic Party, says he hasn’t heard about similar signs being posted anywhere but the Baker Center. He volunteers no theories about who might be behind it, but says, “It’s just really sad and unfortunate that you have individuals wanting to screw with people’s right to vote.”