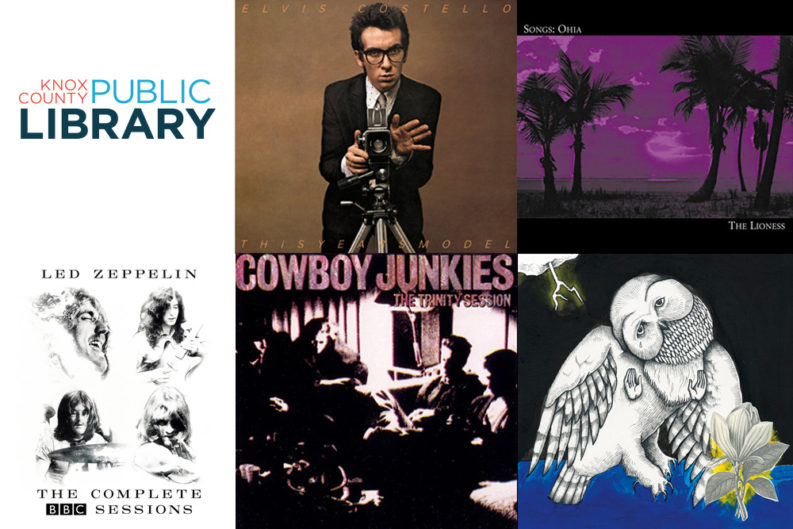 Long-familiar recordings can earn a place on the library’s new music display any number of ways. Maybe it’s an updated version of a classic, with the odd bonus track or few. Maybe it’s a replacement copy of a popular title that was rendered unlistenable by too much love. Maybe it’s a donation. Maybe it is all or several of the above. Here are a handful of choice CDs currently available, well worth a rewind, and new to the collection by various definitions.

Elvis Costello and the Attractions
This Year’s Model (Radar, 1978)
Bloody brilliant. This is Costello’s second album and his first with longtime backup squad the Attractions. The songs are recognizable ear candy but never tiresome: “No Action,” “Lipstick Vogue,” “Living in Paradise,” and on and on. What gives this record legs is the then-new set of sounds that Costello—with keyboardist Steve Nieve, drummer Pete Thomas, and bassist Bruce Thomas (no relation)—invented to build these songs. Punky, racing rhythms square off against Costello’s secret-agent guitar and Nieve’s space-age organ glissandi, which mimic interrogative inflection so that beats alternate between exclamation points and question marks. Nick Lowe, probably Costello’s biggest fan at the time, produced.

Cowboy Junkies
The Trinity Session (RCA, 1988)
Another record that continues to invite imitation, also a sophomore effort. Trinity Session introduced down-tempo Canadians Cowboy Junkies to the United States, and apparently it will always be the band’s most popular record here. Chanteuse Margo Timmins and her brothers Michael, on guitar, and Peter, on drums, know what’s a whisper. They are somehow able to withhold dynamics and kinetics while increasing emotional potency. The band’s first two records made plain their penchant for covers, and their audacious habit of going after hallowed tracks that would intimidate many. Here are “Walking After Midnight,” “Blue Moon” (a la Elvis Presley), “Working on a Building,” “Sweet Jane,” and “I’m So Lonesome I Could Cry.” Quiet as it is, this live-without-audience recording is surprisingly rich and spacious. Sooner or later we’re bound to see a version of this record that makes use of the proto-surround sound Ambisonic technology that was used for the recording.

Songs: Ohia
The Lioness (Secretly Canadian, 2000) and Magnolia Electric Company (Secretly Canadian, 2003)
The late singer-songwriter Jason Molina made a satchel full of intriguing albums and singles between 1996 and 2009. He recorded solo and as leader of a handful of bands of changing names and fluid personnel. Molina wrote thoughtful, ruminative lyrics always tinged with sadness and longing, occasionally anger. But the fact that he knew enough about regret and dread to sing to them led you to believe that he would somehow prevail, that he could dodge his demons. Not to be; Molina died at age 39 from organ failure related to alcohol consumption. In hindsight, it’s easy to imagine Molina’s music as chronicle of a death foretold. He grew up in Rust Belt Ohio and warbled of opportunities missed and good times gone, songs often set in times and places that seem romantic or exotic compared to modern Ohio. Instrumentation is mostly acoustic, leaning toward twang. Molina’s voice is easy on the ears, with a choirboy’s tremolo that allows him the plaintive effect of minor keys while singing mostly in major. These two records are a great introduction to Molina and his music; Magnolia Electric Company contains the excellent “Farewell Transmission,” in which Molina lists the many things he has seen enough of. He seems to end lines not by finishing them but by ceasing to exhale.

Led Zeppelin
The Complete BBC Sessions (Atlantic, 2016)
Kinda sorta Led Zeppelin’s answer to The Basement Tapes, these tracks circulated for decades as a bootleg package. Released as a two-disc set in 1997, the mythmaking tracks not included apparently annoyed more people than the 24 remastered songs offered. This package has the word complete in the title—accurate or not, there are nine additional tracks, including “Sunshine Woman,” which up until now had never been released. The nine new tracks do nothing to illuminate, but they certainly defend the legend. Guitarist Jimmy Page, vocalist Robert Plant, bassist and keyboardist John Paul Jones, and drummer John Bonham made an enormous amount of sound and were impressively tight live. The earliest sessions here, recorded in 1969 for John Peel’s Top Gear radio program, are the most impressive. They crush “Dazed and Confused” and Willie Dixon’s “You Shook Me.” You can tell that they are not yet rock gods, but they seem to sense the inevitable. As the 13 months captured by these recordings pass, you sometimes hear a combination of overconfidence and unsuccessful experimentation that lures them astray from what they do best. But even those passages strike one as momentous, and must have been something to see.