Collegiate Gothic at UTK Today: When the Legend Becomes Fact, Print the Legend - The Knoxville Mercury 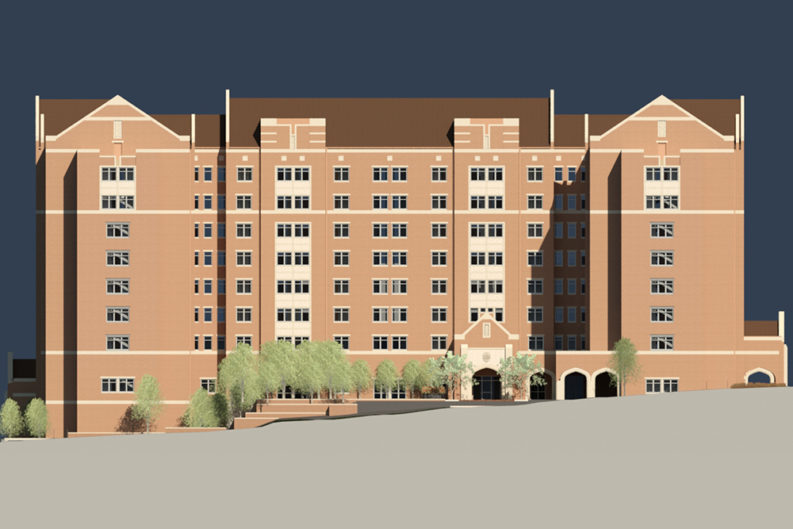 Architectural criticism is a relatively recent invention; we have the Victorian John Ruskin to thank for it, who, as its paterfamilias, tended to funnel his sexual energies towards architraves, frescos, and other art forms rather than his wife, Effie. As it turned out, Ruskin had a lot of untapped energy throughout a long and productive life. One can find all 38 weighty volumes of it in his collected writings in the University of Tennessee’s John C. Hodges Library.

Ruskin wrote lengthy essays, many in support of Gothic Revival architecture, well before photography or engravings became commonplace in architectural commentaries. Hence, his readership was accustomed to disquisitions detailing every nuance of appearance, quality, and materiality.

In the United States, Louis Mumford was the first well-known architectural critic to publish regularly in a national magazine: for three decades, in The New Yorker, beginning in the 1930s. But it wasn’t until 1963 that the first major newspaper hired a critic to focus solely on architecture. The paper was The New York Times; the critic, Ada Louise Huxtable.

Few need to be told that the world has become vastly more complex since Ruskin’s time, and the publishing world far more atomized since Huxtable retired from the Times. What is less well known is that the average 21st-century American uses a much smaller vocabulary than did the literate Victorian to describe his/her world. (We use fewer than 0.1 percent of the words available to us in standard English.) Such a paucity of descriptors inevitably leads to a loss of subtlety.

Then there is the nettlesome problem of facts. They no longer seem to have the relevance they once enjoyed. The 2016 national election seems to have ushered in, with gigabit speed, something the news media often refers to as “the post-fact era,” in which one’s veracity matters less than whether what one says resonates with the preconceived notions of one’s target audience.

In the era of the post-factual, what does it mean, then, when the state’s flagship university adopts a much publicized and unyielding adherence to building in a particular manner—one that seems to have little or no relation to the architectural style the administration insists on assigning to it?

Capriccio of Ayres Hall as Setting For One of Queen Elizabeth I’s Summer Progresses.

Since he arrived in early 2009 from the University of Florida, Chancellor Jimmy Cheek has worked vigorously on several fronts to improve both the substance and the image of the state’s flagship campus. Some of his most laudable achievements are the least visible: improving the university’s status as a research institution, increasing student retention rates, and many more. Chief among his more visible and enduring changes was the requirement that new construction on the UTK campus be designed in what the university officially refers to in press releases and in virtually all meetings in which building design is adjudicated as the “collegiate Gothic” style.

On Oct. 27, the university issued a “call for qualification,” to architects for a $130,000,000 engineering complex planned to abut The Hill, in which they specify: “The Project’s exterior will have a Collegiate Gothic architectural style that reflects the traditional architectural context at the University of Tennessee, Knoxville.”

Making sense out of the current “design culture” on the UT campus would be easier if what the university has been aspiring to is not so much collegiate Gothic but rather collegiate Gothicity. (Yes, it’s a word.) The new brick and stone-trimmed buildings are intended to evoke a sense of the Gothic spirit within a modern paradigm, built in a manner that clearly demonstrates through its character, space, and detailing that this is a building of the 21st century. But they are not; nor is this the university’s intention.

There are a few exemplars of this complex practice within a 600-mile radius of Knoxville. Among them are the addition/renovation to Princeton University’s former Frick Chemistry Lab by Kuwabara Payne McKenna Blumberg (KPMB) Architects, Toronto, and the Mathematics and Science Complex on the campus of Kenyon College in Gambier, Ohio.

Kenyon College is home to what is purported to be the first collegiate Gothic building in the United States. “Old Kenyon” was completed about the same time (1829) as East Tennessee College’s Old College Hall, a full century before it was demolished to clear the way for UT’s Ayres Hall. 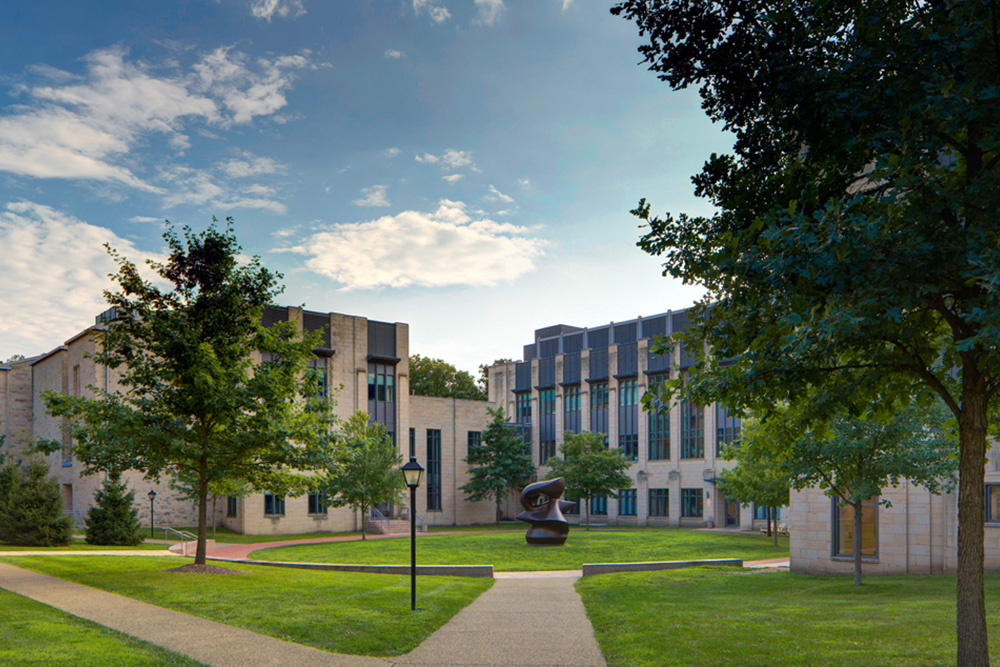 Without resorting to mimicking Gothic forms or attempting vague evocations of an architecture of past-ness common to most of what has been built on the UT campus of late, Kenyon’s Mathematics and Science Complex, by the Boston-based firm, The Gund Partnership, establishes a difficult balance between innovative space-making and rethinking the college’s long tradition of collegiate Gothic architecture in a wholly new idiom. The result is a transformative architecture that is neither historicist, nor modernist, but something that oscillates between these polarities.

Also on the Kenyon campus, also designed by Gund Partnership, is Gund Gallery, located in the college’s historic center. Clad in locally quarried stone, it is perhaps the most articulate and well-informed rethinking of collegiate Gothic spirit within a modern idiom yet to be realized. It is everything one could hope for in a major building on such a storied campus, with fine landscape architecture and equally outstanding building stock. The Gund Gallery is restive and subtle where necessary, bright and engaging when required. There are moments of high contrast and others of still and calm. It engages, challenges, and yet works within the fabric and topography of the Kenyon campus to demonstrate that it is part of the body politic rather than standing apart from it.

There are many who wish one could say the same of what has been happening on the UT campus for much of the past decade, where Ayres Hall is considered the wellspring of all things collegiate Gothic, at least for the current administration. 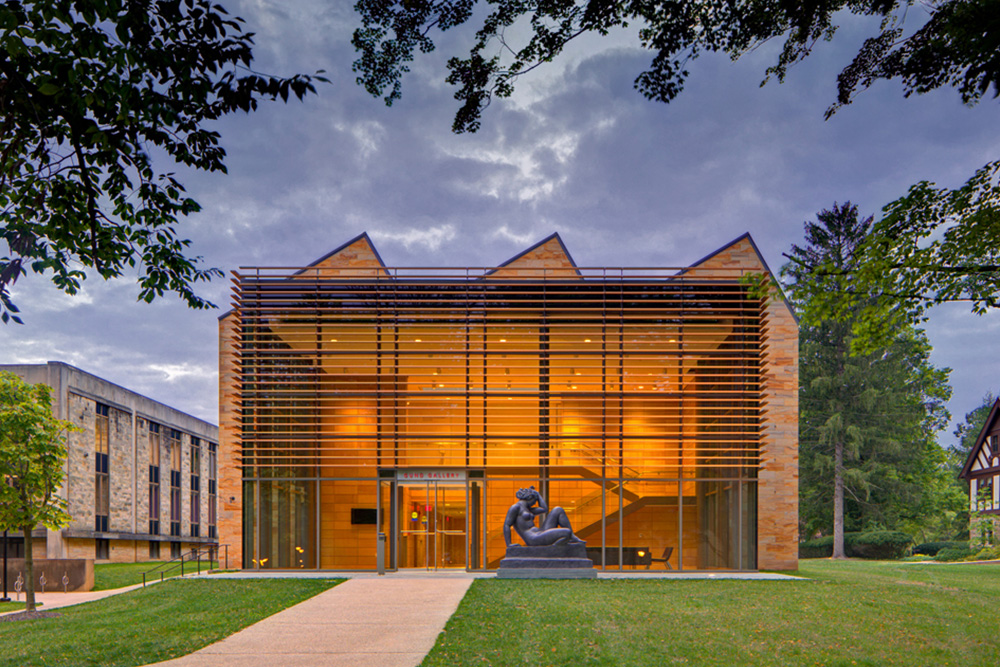 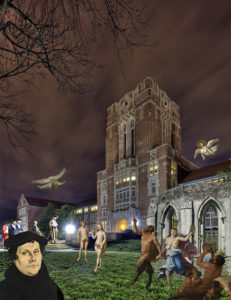 Capriccio of Ayres Hall as Setting for a Gothic Locus Amoenus.

In Oscar Wilde’s The Importance of Being Ernest, as things unravel for its protagonist in the final act, Gwendolen blithely comments: “In matters of grave importance, style, not sincerity, is the vital thing.” This point of view goes far in explaining the state of things architectural on much of the UT campus. And while drawing precise distinctions between Gothic and Elizabethan styles of architecture may seem of little moment, and matters of stylistic discernment are not always so black and white, it is the university’s Knoxville administration that has made the matter such a “vital thing” worthy of some precision, particularly as regards Ayres Hall.

For some time, Ayres has been referred to as collegiate Gothic, not just by the campus administration but by architectural colleagues as well. Yet letters between its architects, Miller, Fullenwider and Dowling, of Chicago, and President Brown Ayres (1856–1919) document—and its form, details, and character demonstrate—that Ayres is a conscious work of Elizabethan Revival architecture. (This was fully fleshed out by Justin Dothard, a recent graduate from the School of Architecture’s graduate program, in his excellent thesis, About Face: The Coming of Ayres Hall at the University of Tennessee, 2016).

Elizabethan architecture was to England and the court of Elizabeth I what Renaissance architecture was to the Medicis of Florence and the popes of 16th-century Rome. Unlike its Gothic precursor, Elizabethan architecture (and its revival) is less richly detailed, is fenestrated with larger and more regular openings, governed by an overall symmetry, and demonstrates a clear preference for flat arches over pointed. Hence, conflating Gothic and Elizabethan is be a bit like confusing Kennedy’s “New Frontier” for Lyndon Johnson’s “Great Society”—they are related by party, and the latter maintains some elements of the former, but one was intended to replace the other, to signal change.

Miller, Fullenwider and Dowling recommended Elizabethan Revival to Ayres, in no small part because it was not as flamboyant, expensive, or as elitist, as collegiate Gothic—all of which were politically problematic for a Tennessee electorate that, in the early 20th century, much like today, was highly critical of the need for a new building at all.

For the most part, much of what has been built in its name during the current UT administration is brick, bland, and relatively inoffensive. In defense of those tasked with their design, while their client specifies its narrow taste in style, it has yet to produce a coherent set of design guidelines. Rather, it simply sends architects to a Pinterest webpage housing a collection of architectural details from the campus, many of which are far more Elizabethan than collegiate Gothic.

In some cases, such as the recent Fred Brown Hall dormitory, it could have worked successfully had it been sited as what urban designers call a “background building”—intended to be unassuming so as to permit the surrounding space, or perhaps a nearby building, to take prominence. Unfortunately, on the UT campus, buildings that would do far better in the background, such as Brown or the Stokely Family Residence Hall (still under construction), are situated in foreground locations.

Why do the new bland brick buildings on the UT main campus have a markedly different character than the more forward-looking recent works on the Agriculture Institute’s West Campus, which differ substantially from the far more forward-looking recently completed Joint Institute for Advanced Materials (BarberMcMurry Architects) building on the UT Cherokee Farm Innovation Campus? Why are those campuses not handicapped by the same unsated desire to resuscitate the image of a past that, at least on the main UT campus, never existed?

To the casual observer these may seem three profoundly different places, with completely different value systems. Yet they are all part of the University of Tennessee’s presence in Knoxville. Why the apparently conflicting representations of attitudes to contemporary technologies and design practices within what one would assume to be the same body politic? These seem questions worth exploring. 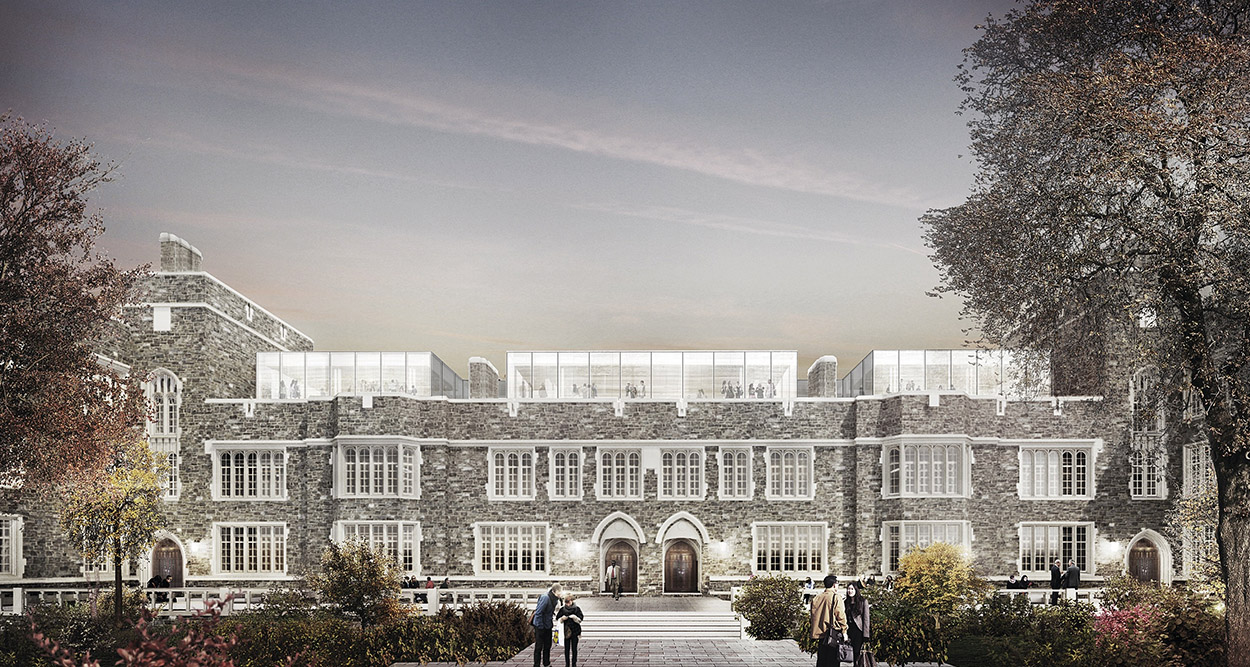