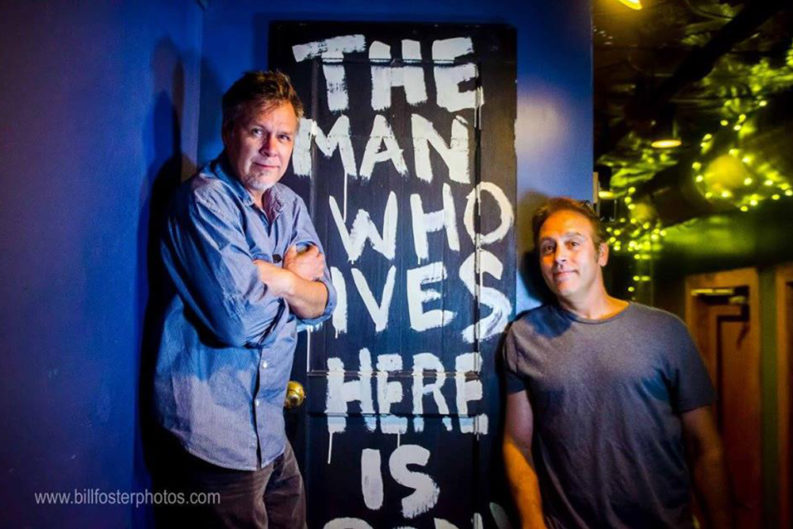 Over the next couple of years, Morris did exactly that. In the 1970s and ’80s, Morris had been a fierce advocate of Agee, keeping his legacy alive when most of Knoxville had forgotten about him. The result was The Man Who Lives Here Is Loony, a drama set in a New York apartment during one night in the life of a writer. It takes its name from a message scrawled on the door of one of the New York apartment buildings Agee lived in during the ’40s and ’50s.

“It’s just a guy, a writer, a modern artist, and he’s in the room at night, taking off on the world, talking about the culture at large, the nuclear age just beginning, New York, Knoxville, different artists, God, humanity, whatever,” Morris says of the play.

Almost all of the dialogue is taken directly from Agee’s published work: fiction, poetry, journalism, letters, and reviews. “I didn’t want to put words in his mouth when he’s talking about heavy things,” Morris says. “I wanted him to speak for himself.”

Those direct quotations are a big reason The Man Who Lives Here Is Loony has remained an unofficial, largely underground phenomenon. It’s been performed several times in Knoxville, most recently in 2005, and in 2006 was staged at the Cornelia Street Cafe in Greenwich Village. But it’s never been officially approved by Agee’s publishers or the trust that oversees rights to Agee’s work. That’s one of the reasons Morris is staging a new production of the play at the Knoxville Museum of Art in late October and early November: He’s paying the trust for rights to Agee’s words, which gives the play legal standing and ensures it will live on.

“I knew I needed a production of the play, and/or publication of it, in order to get permissions from a couple of Agee’s big publishers, Houghton Mifflin and Penguin, as well as the James Agee Trust,” Morris says. “They’ve all been supportive, but we never worked anything out officially, and I wanted the play to have a life of its own.”

The Man Who Lives Here Is Loony , directed by Morris and starring Joe Casterline, with music by Taylor Coker, will have four performances at KMA, on Oct. 27 and 30 and Nov. 3 and 6. Tickets are $15. Visit rbmorris.com for tickets and information.