Even Before TV, Local Photographers Documented the Vol Football Team on Film - The Knoxville Mercury 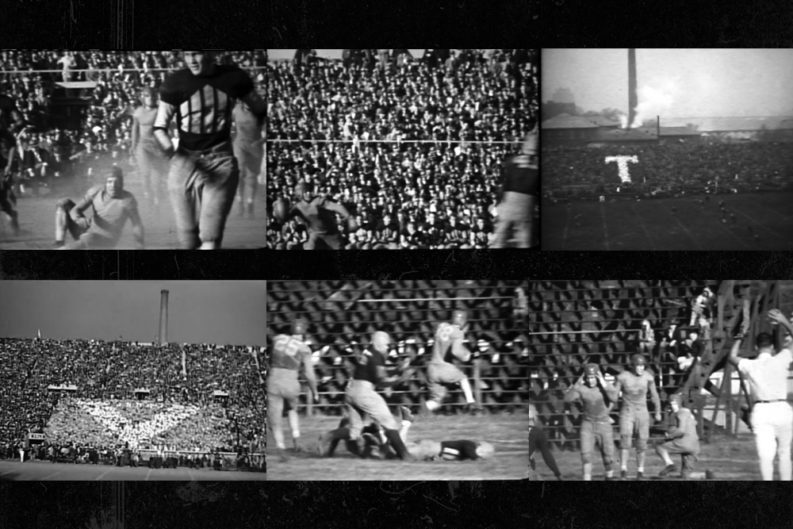 Seems like everybody’s got Vol fever recently. Even people who normally don’t care that much about football have gotten excited, watching the games at crowded bars or with friends. University of Tennessee football has been a big deal in Knoxville since at least the 1920s, when Robert Neyland began his wildly successful tenure as coach. Of course, before games were broadcast on television, the only way anyone could watch them was to show up at Shields-Watkins Field, or watch them on film after the fact.

There were several people around town who would film portions of the games with 16mm cameras and then host both private and public screenings. The Tennessee Archive of Moving Image and Sound has several of these films, dating from the 1920s through the 1940s, and they offer a look at not just the UT Volunteer football teams, but the culture surrounding the game.

The earliest footage in the archives is a 1928 game from the collection of local businessman F.B. Kuhlman. He would have been about 14 at the time, so it was probably shot by his father, Nathan. It was filmed from the upper stands, providing a good panoramic view of Shields-Watkins Field, where capacity at that time was 6,800. Houses sit surprisingly close to the field, and UT’s steam plant juts up against the back of the stands, its smokestack towering above the fans. Kuhlman was known to show films to schools and clubs, and this film was part of a segment called “News of Knoxville 1928,” so it was possibly seen by a good number of people.

It’s no surprise that Jim Thompson filmed UT football; he seems to have filmed everything around town. Thompson edited together fragments of games from 1929 to create an overview of the Vols’ season. Most of it is filmed from the stands, but one section, several minutes long, provides a clear, unobstructed view from the sidelines. Intertitles keep viewers updated on the score and occasionally comment on the action: “Bobby Dodd’s breathtaking passing & punting behind the goal line.” “Rain and mud!” The Vols had one tie and nine wins that year, including several blowouts, such as a 73-0 defeat of Carson-Newman.

Frank L. Rouser opened his motion-picture shop at 208 Magnolia Ave. in 1932. The company adapted, remaining in the same location, as an audio-visual business, until closing in 2011. Like Thompson, Rouser filmed a lot of locales and historic events around Knoxville, including the 1937 opening of the McGhee Tyson airport in Alcoa. He traveled to Florida in 1939 to film the Orange Bowl, where the Vols beat the Oklahoma Sooners 17-0. Rouser’s eight-minute color film features as much footage of the marching band and crowd as football, but it’s noteworthy—at times the up-close action makes it appear as though he were on the field for some of the plays.

Thompson also filmed a 1938 home game against LSU. By that time, capacity at Shields-Watkins was 31,390, almost five times what it had been 10 years earlier. Thompson takes a similar vantage point from the stands as Kulhman. (I could only tell it was LSU because their mascot, Mike the Tiger, was present.) The steam plant is now obscured, but the smokestack still looms large.

In 1941, Thompson followed the Vols to Baton Rouge for LSU’s homecoming game. It’s possible Thompson shot footage of the game, but all that’s in the Thompson collection at TAMIS is five minutes of the homecoming parade. A shame, but you can see why the floats caught Thompson’s eye—they’re colorful and imaginative. Mike the Tiger is put on rolling display in a cage. A train engine rolls down the sidelines, bearing signs reading “Chattanooga Choo-Choo” and “Railroad the Vols.”

One float displays a “Tenn bottle in bond 4 U” sign, while atop Alpha Chi Sigma’s float sits an outhouse, long underwear hanging from a clothesline, and a moonshine still advertising “Volunteer Brew.” These days, East Tennessee is lousy with moonshine distilleries. But I don’t think that float was meant to celebrate Appalachian tradition and self-reliance. At least civility was present with the appearance of the “Welcome Vols” float.

It might seem odd that Rouser focused so much on the bands and that Thompson filmed a parade instead of the game. But then, as now, the pomp and circumstance surrounding the game was part of the event, and crowds reveled in it. The best example of this is a film of the Vols’ trip to the 1940 Rose Bowl in Pasadena, Calif., shot and edited by Pat Roddy Jr. Over the course of an hour, we see the team taking a train out west, on a boat trip to Catalina Island, carousing with director Clarence Brown, and sightseeing in Hollywood. But there’s no footage of the game at all.

The Roddy family donated a transfer of the film to TAMIS years ago. It’s a remarkable document, despite being a VHS transfer with no shots of the actual game. But three 16mm reels with 20 minutes of beautiful Kodachrome color footage of the trip and the game, shot by an unknown photographer, have recently surfaced.

To be continued in two weeks.