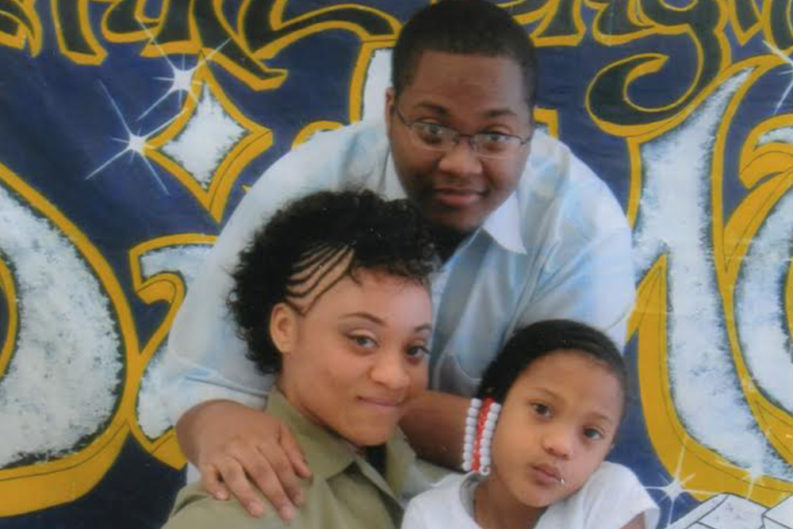 After a year of dating, Lashonda Hall realized her boyfriend Johnnie “Bro” Martin—whom she initially believed worked in real estate—was actually a drug dealer. But after a previous abusive relationship, Hall had fallen in love with the solicitous older man and the stable lifestyle he provided her and her son. As she tells it in an online explanation of her clemency petition, she occasionally gave his associates rides or passed along drug money, but mostly she stayed out of the business.

That didn’t stop her from being indicted on a conspiracy charge when Martin’s drug ring was busted. And when she wouldn’t take a plea deal to testify against her boyfriend, firearms charges and “possession with intent to distribute” charges were added—despite the fact that she wasn’t found with any drugs or guns. (This led to an accusation of prosecutorial misconduct in 2007, as reported by the Knoxville News Sentinel.) Nonetheless, she was convicted and given a sentence of 45 years—longer than some murder sentences. (Martin was given a 60-year sentence.)

Today, Hall is seeking a reduction in her sentence, known as clemency, which can only be granted by the U.S. president. (This is different from a pardon, which clears the person’s criminal record.)

Various local and national justice reform groups have taken up her cause, partly because they see it as an example of what’s wrong with the justice system in our country: too many people serving long sentences for non-violent drug crimes. But it’s also emblematic of some less-well-known issues involving the treatment of women in prosecution, sentencing and clemency decisions.

A Change.org petition requesting clemency for Hall has garnered 1,171 signatures. After signing, Mona Harvin of Knoxville wrote, “Sad to take her from her baby and her family when murderers are walking around with a slap on the wrist. The system is so messed up.”

On Saturday a rally to support Hall will be held at Chilhowee Park, sponsored by Black Lives Matter, the Knoxville Incarceration Collective, Community Step Up, and Brothers on a Mission. The Mighty Kings dance group will perform and Halls’ family members will speak. The rally will be followed by a march to Hall’s former high school, Austin East.

Much of Hall’s support is being organized by Tray Johns, a welder whose home base is Knoxville but who travels the country working with the National Council for Incarcerated and Formerly-Incarcerated Women and Girls. (Johns herself served more than eight years in federal prison on a marijuana charge.) She also works as a “guardian angel” for Hall through the Can-Do Foundation, which seeks clemency for non-violent offenders with long sentences, particularly drug offenders. Can-Do has identified Hall as one of the 25 women nationwide who are most worthy of having their sentences commuted.

Amy Povah founded Can-Do after her own 24-year sentence for conspiracy was commuted by President Bill Clinton. Povah refused to wear a wire to gather evidence against her husband, the kingpin of a drug ring, whose plea bargain enabled him to receive a mere three-month probation sentence.

Povah says Hall’s case is a good illustration of the way women are often targeted using the conspiracy law, which holds them responsible for someone else’s actions and can rely upon testimony alone rather than physical evidence.

“The time of your sentence is based on activity you didn’t do yourself or drugs attributed to everyone in the conspiracy,” Povah says. And because the women, frequently wives and girlfriends, aren’t high-level operatives, they don’t have information valuable to prosecutors. That means they are less likely to be offered plea bargains. “I have case after case after case where the woman is the only one in the entire conspiracy who is still serving time because they didn’t get a deal,” she says.

Johns plans to take Hall’s son, who is now 20, to Washington, D.C. for a vigil Nov. 14 and 15 as part of an event organized by #cut-50, a national initiative to cut the U.S. prison population by 50 percent over the next 10 years. Povah says about 40 children whose parents are in jail will tell how mandatory minimum sentences and long drug sentences have affected their lives.

This is the start of a final push for more commutations before President Barack Obama leaves office. Obama launched an initiative in 2014 to commute or pardon non-violent drug offenders whose sentences would have been much shorter under today’s sentencing guidelines. He has commuted more sentences than any other president—583 according to the U.S. Department of Justice tally online—for a total that already exceeds that of the previous six presidents combined. The vast majority of those commuted sentences were this year.

“There’s a high level of tension, a sense of urgency,” Povah says. “Many of us aren’t getting much sleep. We’re working around the clock.”

That’s not what’s happening. Perhaps partly because there are so many more men in the system, they have received the vast majority of commutations, Johns says. (The U.S. Department of Justice doesn’t keep the stats online.)

Povah says she is seeing men granted commutations who have long rap sheets and even poor prison records, while women with exemplary conduct are denied.

“I think this program will end with Obama,” Johns says. “So we need to get this done right now. (Hall) gave nine years. Does she really need to spend 32 more years in prison for driving a car, basically? She was manipulated by an older man. She would have followed him to depths of hell, and that’s exactly what she did.”

Featured Photo:  Lashonda Hall and her family, from her Change.org petition.