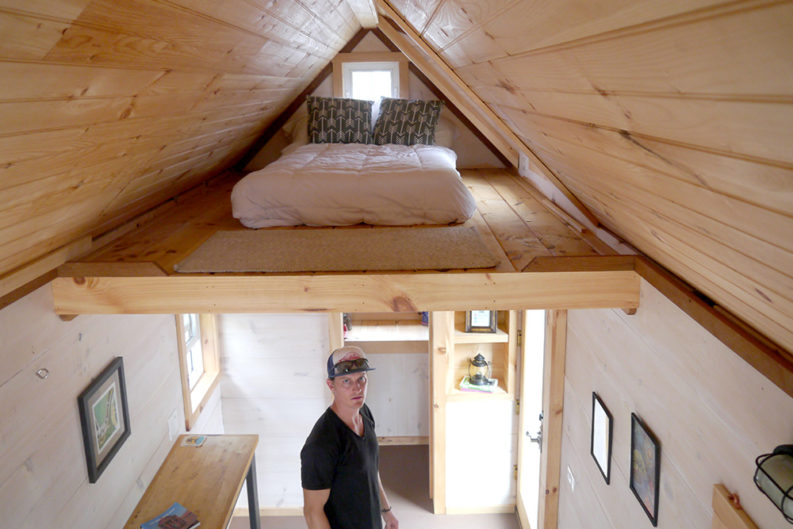 His house may be small—tiny, even—but David Bolt doesn’t like sitting around inside anyway. He’d rather be building a chicken coop or tending tomatoes or feeding the fish that provide nutrients for his aquaculture project. Or planning more tiny houses like his own.

“To me, the thought of buying a house and taking out a 30-year mortgage is hard to swallow,” Bolt says. He’s at what could be considered a sustainability compound of sorts: Sustainable Future, his company’s headquarters on Ogle Avenue, down from the famed South Knoxville restaurant King Tut’s Grill.

Bolt made his money in the software industry before he started preaching the tenets of living closer to the Earth. He is just one local proponent of this minimalist approach to housing. 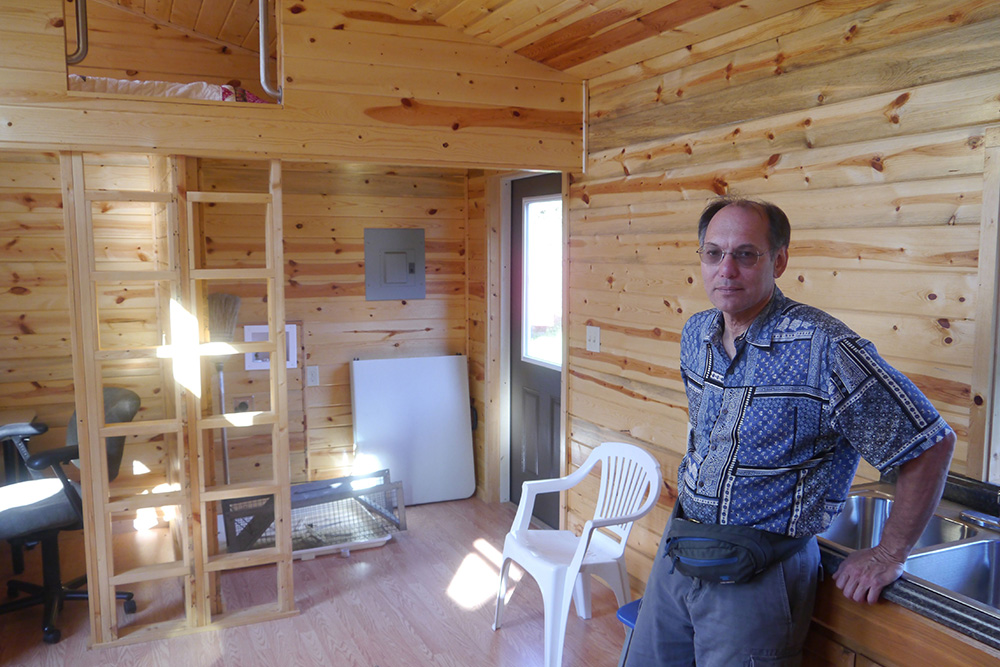 David Bolt (right), owner of Sustainable Future, stands inside a 288-square-foot tiny house made by his company.

Tiny houses—typically, plumbed and wired stick-built dwellings of about 150 to 500 square feet, depending on whether they rest on wheels or permanent foundations—have gradually spread to East Tennessee in recent years; they were first widely promoted by a California man named Jay Shafer 18 years ago. The Facebook page for Shafer’s Four Lights Tiny House Company has nearly 60,000 likes, and he has published books singing the praises of such dwellings: They are relatively cheap, transportable, have a low carbon footprint, and can free people from traditional long-term mortgages. They’ve become popular enough that even manufactured housing giant Clayton Homes has unveiled plans for tiny houses.

“It’s an opportunity to do the right thing for the world, while making sense financially,” says Matt Sterling, a Maryville native who owns the artisan design/build firm Sterling Contracting. He cites Shafer as an inspiration and a resource.

Sterling is a member of the Happy Holler Craftsman Co-op on West Anderson Avenue, another local center for sustainability and a clearinghouse for information on tiny houses. He is a member of a craftsman co-op with five other members that operates out of what was once a derelict bar. He eventually wants to open the space—converted to a spacious, working shop—to the community and provide, for instance, carpentry lessons and sustainability workshops.

Sterling’s house—he doesn’t live there, but calls it “a really expensive business card”—is not as claustrophobic as one may imagine; nor is Bolt’s home. There is plenty of light, lofts for storage and sleeping, and a shower and composting toilet. Sterling’s house hasn’t been hooked to electricity or a water source, and isn’t fully kitted out yet, but there’s room to install a small stove and sink.

He built it after burning out on the traditional residential construction industry and taking a year off to tour cities where tiny houses have taken off, such as San Francisco and towns in Vermont. He built some of the homes in Huntsville, Ala., in cooperation with Foundations for Tomorrow, but they sit vacant because city codes don’t allow anybody—outside of mobile-home parks—to live on wheeled homes, he says.

“People get freaked out—it’s on a trailer and really small,” Sterling says. But tiny houses offer much better moisture control and insulation than a typical recreational vehicle or towed camper. Such city codes can be a hindrance, but the main roadblock is the need for a permanent foundation, which is required in Knoxville. Sterling says his next mission is moving toward a focus on permanent foundations.

Knoxville codes allow for tiny homes, with stipulations that include:

• Tiny houses must have at least one habitable room of at least 120 square feet.

• Ceiling heights must be at least 7 feet.

• The houses must have cooking and refrigeration equipment and a sink, all with frontal working clearance of 30 inches.

• There must be a hot and cold water supply and an approved method of sewage disposal.

• Stairways—needed to reach the lofts featured in most such homes—must be at least 35 inches wide, have risers of no more than 8 inches, and treads of at least 9 inches. Ladders are not allowed.

Bolt’s Sustainable Future is working on preliminary plans for a tiny-home development of about 3 acres near Western Avenue. The development would include two clusters of homes and preserve the remaining acreage as open space. It would be a communal development, of sorts, with community gardens.

Those features could be provided with expertise from the East Tennessee Permaculture Institute, a nonprofit that shares the Ogle Avenue site with the for-profit Sustainable Future.

“It’s all tied together,” Bolt says. 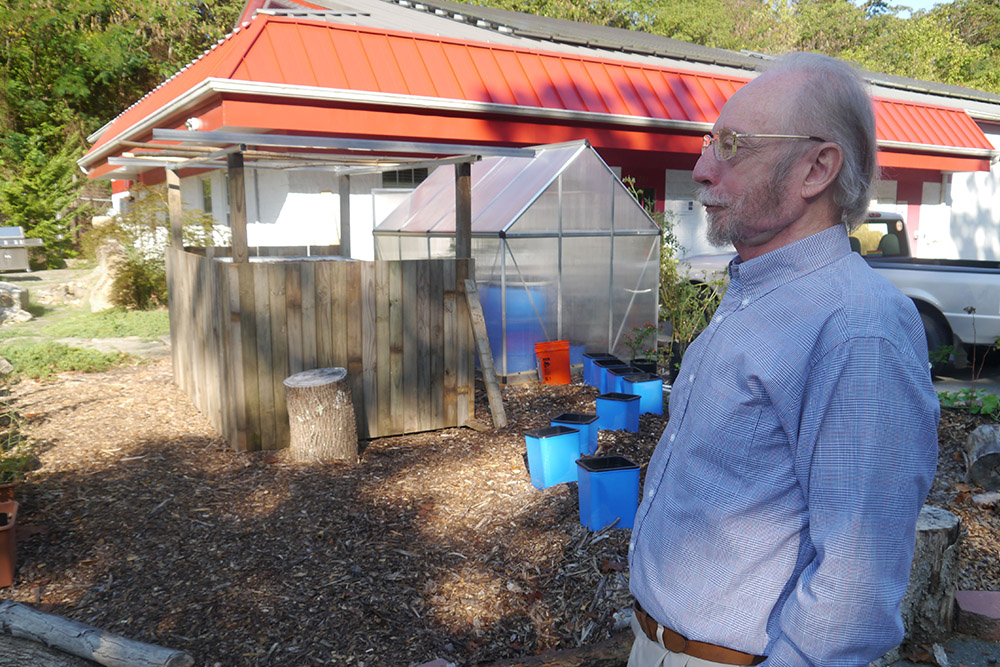 Jim Gray, an economist and cofounder of the East Tennessee Permaculture Institute, discusses plans for the institute’s Ogle Avenue property in South Knoxville.

Jim Gray, an economist in the field of biodynamics, directs the institute, which he says is still in “an evolutionary process.” In addition to the poultry, hydroponic gardens, solar and rainwater collection demonstrations, the center plans a “food forest” that will provide edible berries and nuts.

“It’s an interesting experiment in both sustainable practice and building a community of like-minded people who can spread the word,” he says.

Bolt recently connected with Sterling and visited the Happy Holler Craftsman Co-op, referred to as “The Shop.”

For Sterling, the tiny-house movement represents potential for a massive lifestyle change that can unshackle and reorient people toward their true purposes, whatever those may be.

The houses and their accompanying concepts of living more lightly on the land “can free ourselves from the expense and burden of housing to pursue positive and creative endeavors, and do things you’re passionate about instead of working 60 hours a week,” Sterling says.

Featured Photo: Matt Sterling shows off the 160-square-foot tiny house he keeps stored at the Happy Holler Craftsmen Co-op off N. Central Street in Knoxville. Such houses can be built for as little as $20,000. Photo by Thomas Fraser.