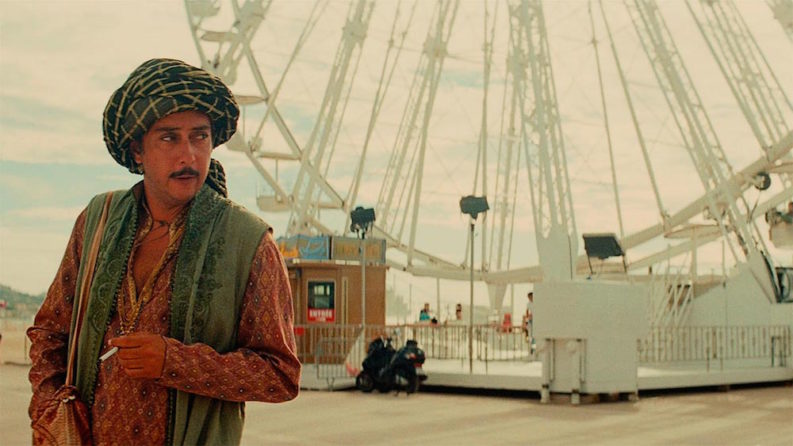 Arabian Nights (2015)
It may be to my advantage that I’ve been reading The Discreet Hero, Mario Vargas Llosa’s most recent novel, at the same time I’m imbibing Arabian Nights, Miguel Gomes’ marathon film fantasy of cultural criticism. With Vargas Llosa, I’m accustomed to the prospect that any mention of human or mechanical failure, erosion, blight, abundance, or scarcity is an allusion to Peruvian culture or government that I should look up. Part of the pleasure is sensing the potential stories multiply as characters and conflicts overlap.

In this six-hour-plus series of interrelated tales, Gomes contemplates his native Portugal during 2013 and 2014, as the population suffers under austerity measures enforced to satisfy the European Union. The structure of the storytelling has some elements in common with the 1,001 stories that Scheherazade may have told her husband, the sultan. His previous wives had been unfaithful, so he made a practice of marrying virgins and having them executed the following morning, before they could shame him. Newlywed Scheherazade spun yarns in cliffhanger, to-be-continued style, so that the sultan couldn’t bear to have her killed before he learned a story’s ending—which she would fold into the beginning of a new story. With Arabian Nights, there is the sense that for Gomes, as with Scheherazade, lives are at stake.

A rooster goes on trial for crowing too early. A cardiologist, who may or may not be a mermaid, sees patients inside the belly of a beached whale. Unemployed men and women distract themselves as they must—gathering for a frigid ocean swim on New Year’s Day or trapping and training finches to sing competitively. Gomes and his DP, Mário Castanheira, fairly worship the human figure—male and female, young and old, ideal and otherwise. He also takes full advantage of the musical, lilting rhythms of the Portuguese language and patiently presents long stories that are as interesting for the sounds they make as for the facts they convey. The result is absurd and beautiful, shot on a combination of 16mm and 35mm film, and—no matter how weighted with allegory and metaphor—probably more similar to real life than anything you’re apt to find at the multiplex anytime soon.

Some scenes play out in pseudo-documentary style, beginning with an onscreen introduction from Gomes, who intimidates himself with his stated mission and then flees, his crew in hot pursuit. Other segments are assembled in the familiar form of sequential scenes, like “The Owners of Dixie,” a tale of a stray dog named, by a relatively wealthy woman, after a deceased dog she resembles. But the woman can’t afford to feed the beast during these hard times, so she gives the dog to a couple she dislikes. That couple loves the dog, but the added expense is more than they can bear, and they in turn find another family to care for the dog before taking extreme measures to dodge their debt and circumstances. The plight of the dog and those who care for it is made clear as one couple, both recovering addicts, try to cajole food suitable for a dog from the charity that supplies their meals.

Several scenes take the shape of a courtroom procedural. Everybody has been wronged and, in turn, has wronged someone else in order to survive. And since everyone is guilty, sigh, no one is guilty. That exasperating conclusion does nothing to improve anybody’s situation.

Sighet, Sighet (1967)
Harold Becker shot this spare yet potent condemnation of the Holocaust, narrated by Elie Weisel, who recounts a return trip to the Transylvanian village where he grew up. Now a part of Romania, all appears to be normal in Sighet. Yet Weisel remembers when the town hosted thousands of Jews instead of the few dozen families remaining, and when the town needed its three synagogues, two of which have since been demolished. Weisel remembers the town, he says, “before the world lost its innocence, before God lost his mask.” Becker’s camera captures static shots of rain-damp, empty streets. Interspersed are portraits and family photos that predate World War II and the deportation of the town’s Jews to concentration camps. Clarinetist Jimmy Giuffre performs a haunting solo score beneath Weisel’s mesmerizing elegy.

Weisel resigns himself to the reality that modern Sighet has no choice but to deny the existence of the town where he had lived. “The town that was mine,” he says, “never was. People must live. And above all, they must forget.”

Weisel died earlier this year. Most images accompanying the print and online memorials to his life portrayed him in this century, posing as a token survivor at wreath-laying ceremonies and maudlin anniversaries. This film, like any of his books, better serves his memory and our memories.