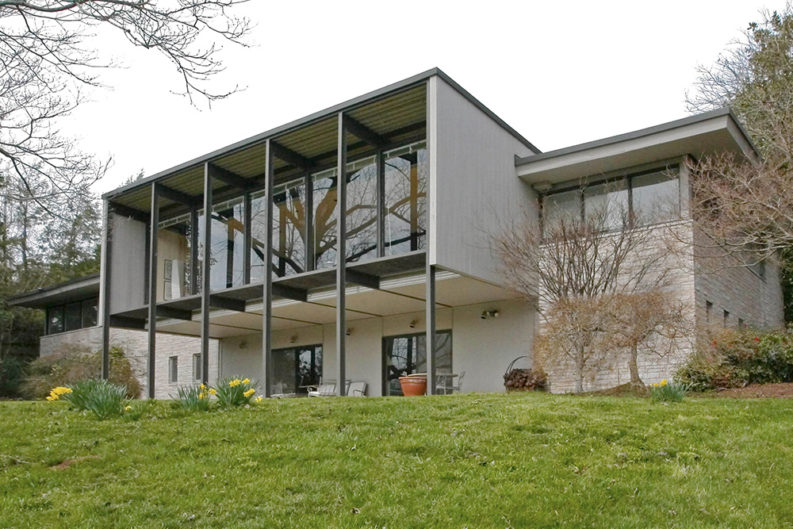 Every visionary architect should have a loyal patron. Frank Lloyd Wright had the Kaufmanns, who commissioned iconic Falling Water in southwest Pennsylvania, where the home stands preserved as a modern masterpiece. In Knoxville, in 1954, Ben F. McMurry Jr. had Dr. Harry Jenkins. McMurry was only 28 when Jenkins asked him to design a contemporary home on one of the best lots on Cherokee Boulevard.

West Knoxville had never seen anything quite like it. In the mid-1950s, modernistic houses, as the style was called then, were locally few and far between. The International-style homes of renowned architects Alfred and Jane Clauss had been built in Holston Hills and off Chapman Highway (see “Future Past,” page 12). But in Sequoyah Hills, the dramatic glass and steel and marble-façade masonry structure was a wonder—and the talk of the town.

Today, the “Jenkins House,” now home to University of Tennessee architecture professors Marleen and Tom Davis, is as contemporary and striking as it was when it was built.

“He hired a relatively young architect and trusted his vision,” says Marleen Davis about the relationship between Jenkins and McMurry. A popular physician, Jenkins was married to Varina Mayo Jenkins (of the seed company Mayos) and the family lived in a very different, Mediterranean-style home at the time. The Jenkins were Sequoyah Hills neighbors of Ben F. McMurry Sr., the architect’s father and a founding partner of the architectural firm Barber and McMurry.

The 7,500-square-foot residence was a chance for the younger McMurry to shine.

“The home used a lot of contemporary-design thinking,” Davis says. Specifically, the architect excelled at the modern tenet of “bringing the outside in,” both through site-specific exposures and in the choice of materials. In the second story’s 50-foot-long, south-side great room, which faces Cherokee Boulevard and the Tennessee River across it, a wall of floor-to-ceiling glass is supported by dramatically exposed black steel beams from the exterior ground floor. The glass front allows a constant play of natural light throughout the room; in the corridor that leads to bedrooms and baths, an interior skylight brings more rays into the home. 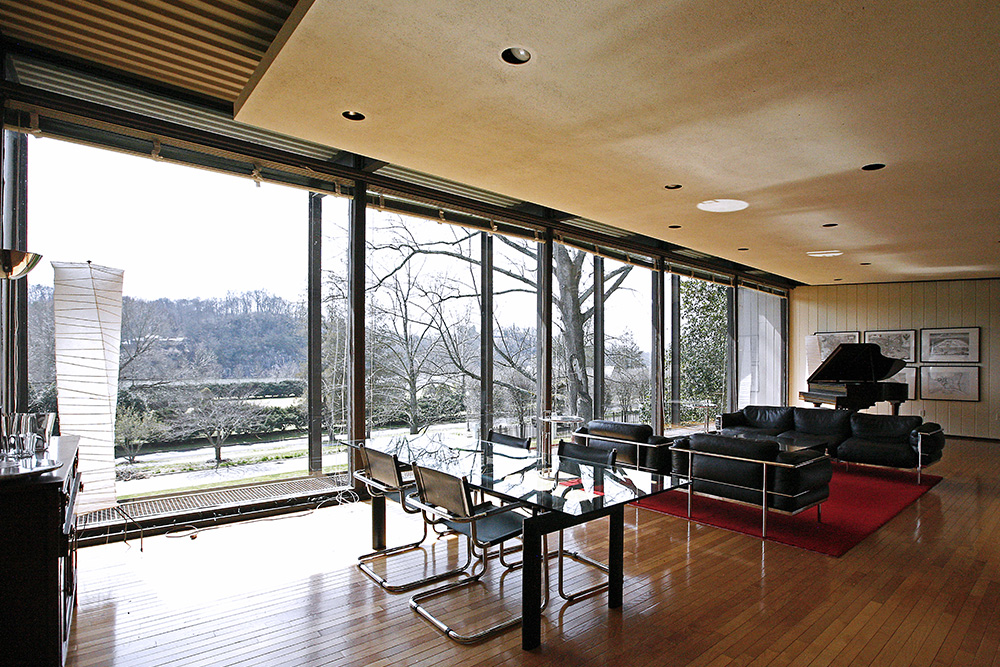 On the second floor, a wall of floor-to-ceiling glass spans the 50-foot-long, south-side great room, which faces Cherokee Boulevard and the Tennessee River across it.

The home’s exterior masonry sports a façade of pink marble—East Tennessee’s own natural jewel—quarried locally and cut at nearby Marble City. In the second-story entrance, a pink marble retaining wall creates a natural path toward the great room. Originally, the outside-in concept was carried even further by a party deck off of the great room, although before the Davises bought the home, previous owners had converted this into a cozy TV room/den.

The kitchen, state of the art for its time, has also been redone, and the Davises redid the large master bath. The main guest bath still has the art deco-influenced gray and yellow geometric tile original to the home. The off-bedroom bath created for the Jenkins’ daughter, Carol Mayo Jenkins (an actress who is now a theater professor at UT), had pink marble and pink fixtures throughout. Like the marble, the glass, tile, and wood paneling in the home all came from local vendors.

Jenkins seems to have given McMurry his head in the way of “gadgets” for the residence. Along the southern wall of glass, there is an exposed steel catwalk between the glass and the beams. A built-in pipe-system window-washing apparatus was fashioned during construction to keep the view breathtaking.

The great-room ceiling boasts recessed lights on dimmers. Although now quite common, “that was very innovative for its time,” Davis says. The home had central air conditioning, also something of a novelty, and a built-in hi-fi and intercom system, although the sound system hasn’t been used in years. Davis says Carol Jenkins told her there was once a dumbwaiter between the basement rec area and upstairs kitchen, walled off after the family cat took too many trips upstairs-downstairs. 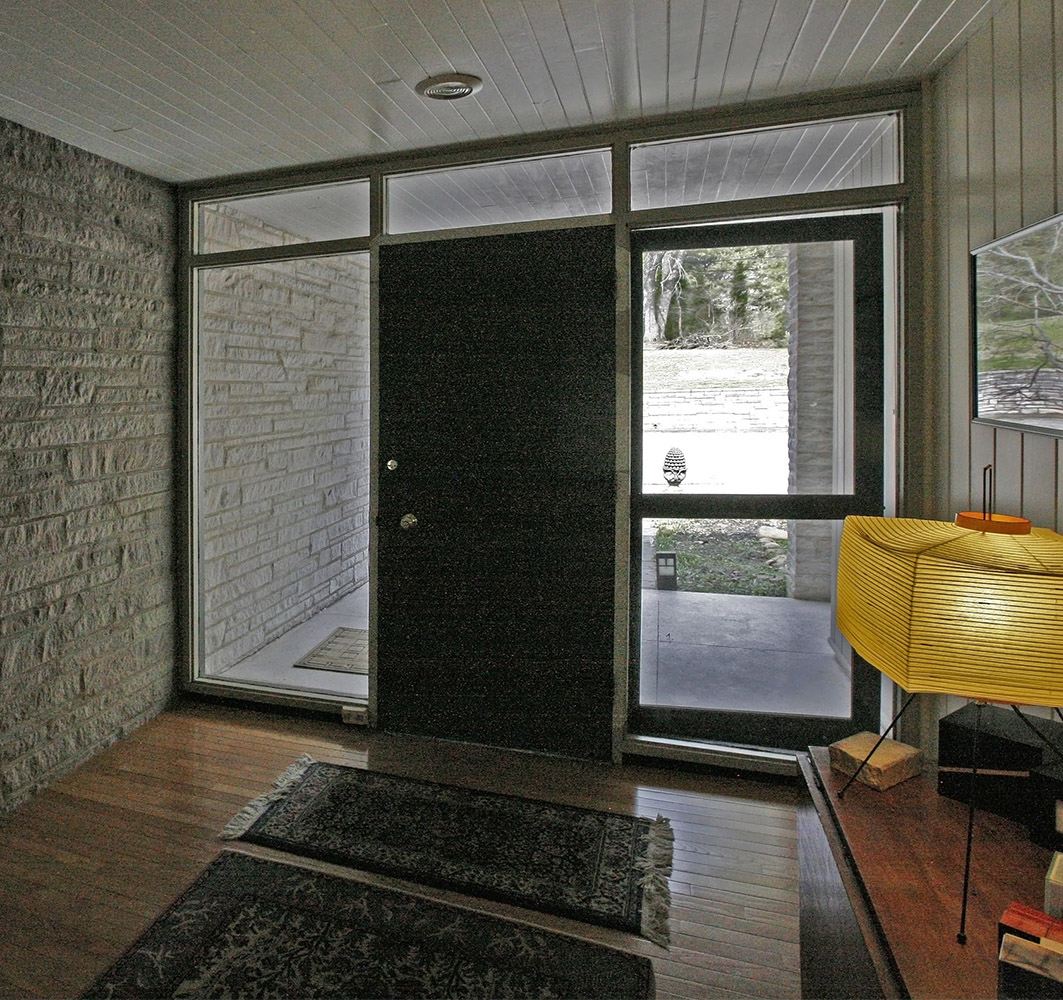 Current owners the Davises mostly use the downstairs as a workroom/study, entertaining in the upper great room. There’s no bad spot for a gathering.

The downstairs, originally a rec room, is covered in terrazzo marble, as is the second-story outside entrance. The downstairs has sliding doors that open onto a patio area and lawn; the Jenkins hosted numerous parties for their friends and their daughter’s friends. The Davises mostly use the downstairs as a workroom/study, entertaining in the upper great room. There’s no bad spot for a gathering.

“The house is great for bringing people together,” Davis says.

She and her husband, who are the parents of two now-grown sons, weren’t sure what they were looking for when they relocated to Knoxville in 1994. They liked the convenience and neighborhood feel of Sequoyah Hills and, as design professionals, didn’t want something blah. This home had been on the market for a while, and the listing agent wasn’t sure whether it would sell to someone who would appreciate the house for its architectural significance or whether it was going to become a tear-down for a McMansion lot. Their decision to buy was immediate. 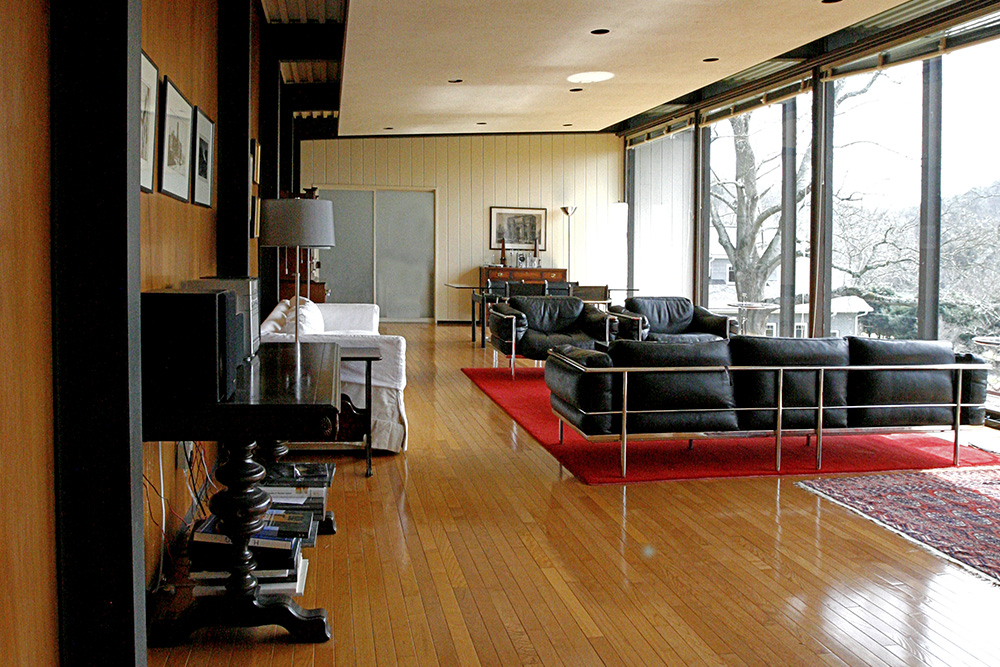 Marleen Davis, who recently ran for City Council, is enamored with the history of the house. On one wall, along with an intriguing collection of maps of Knoxville and other cities, is the framed award McMurry won for the home, when the architect was recognized for his accomplishments by the Gulf States Regional Conference, American Institute of Architects, 1958. Seeking out a preservation designation or landmark status for the home is on her to-do list.

Although McMurry became the president of Barber and McMurry (now BarberMcMurry) and was responsible for many fine structures, none of his other works were quite as daring or statement-making as the Jenkins House. But aside from the design merits of the home, the things that make it special to Marleen Davis and her family are more subtle pleasures: the view to the river and bluffs beyond Cherokee Boulevard, and the lively street itself, as well as the artful play of natural light through the home throughout the day. For 61 years, it’s been a happy place, and it feels that way.

“It’s a beautiful house and a joy to live in,” she says. 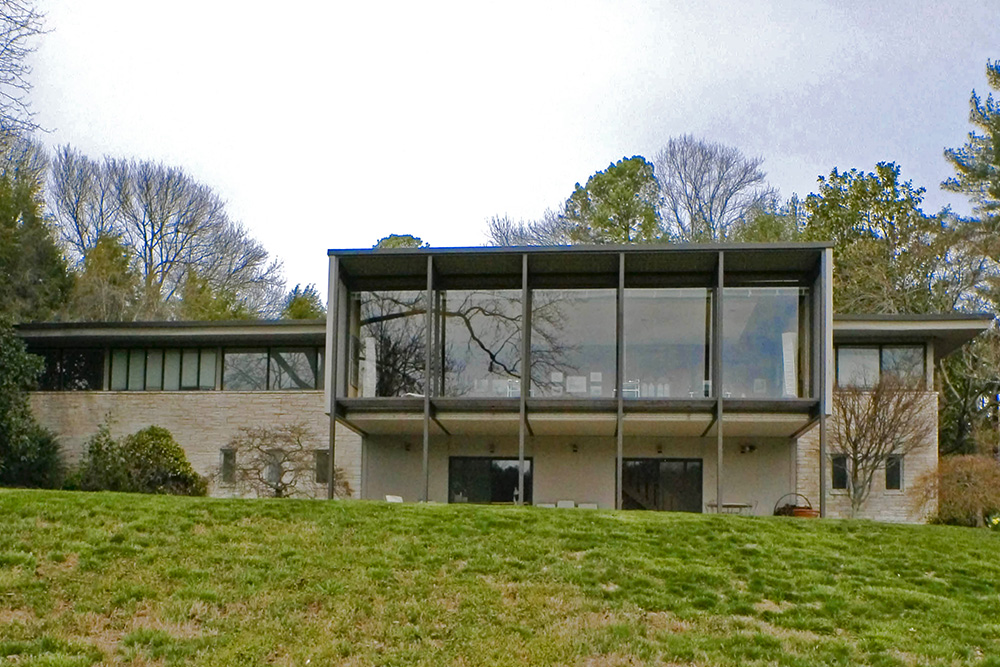