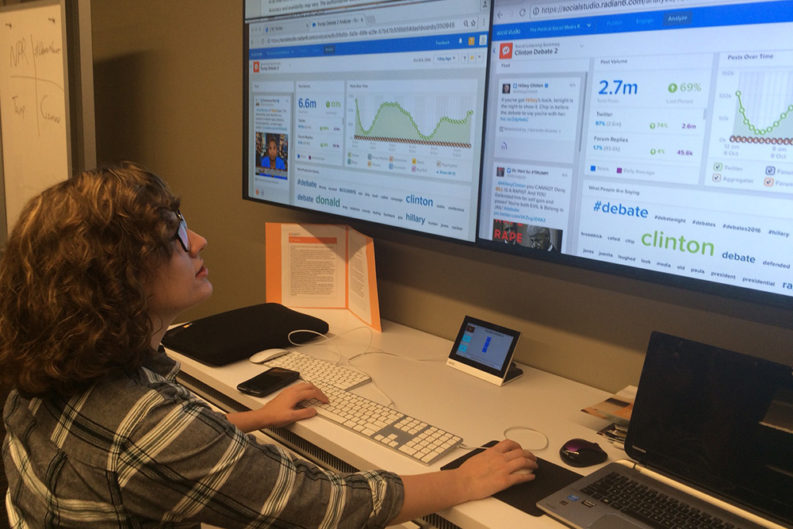 Beth Hurst was about to spend her Sunday night diving into the hive mind.

She and eight other graduate students readied laptops and digital screens and tuned into CSPAN as the second presidential debate approached. Tortilla chips were passed around and soft drinks cracked open. One wall of the well-lit laboratory/classroom was dominated by four screens combined to form one giant display of real-time digital feed.

The Adam Brown Social Media Command Center at the University of Tennessee was coming to life.

The lab, which can accommodate 25 people, features six large flat-panel monitors, including one 60-inch touchscreen, three Mac minis, and two Apple TV units. Students sat around a horse-shoe-shaped counter in front of the big-screen TV, or at one of several tables littered with electronic devices. They compared notes and girded themselves for a long evening ahead.

Hurst and the others, under the direction of professor Stuart Brotman, spent the next three hours analyzing social media and gauging international reaction to the debate between Hillary Clinton and her Republican rival Donald Trump. The university is the only school in the world that has access to Salesforce Marketing Cloud Social Studio software, allowing students in the Political Science Social Media Group to mine the trove of data and opinions and thoughts that fly out via Twitter, Facebook, Google+, Instagram, and LinkedIn. Their findings were then disseminated to some 400 media outlets.

“Social media is highly personalized and now is clearly an essential part of the information flow that millions of Americans use to make decisions large and small—including who to elect as our next president,” Brotman says of the command center’s value. “Millennials in particular are a key demographic in this year’s election who could make the difference in its outcome. They primarily consume news online, and use social media on a 24/7 basis to gather more information and see how their friends are responding in real time.

“This immediacy can be very impactful—the social in social media creates a new level of credibility that may well influence which lever to pull in the voting booth.”

Adam Brown—a 1994 graduate of the School of Journalism and Electronic Media who is now executive strategist for Salesforce, a San Francisco company that was a leader in the development of cloud technology—provided UT free access to Social Studio, a leading software platform originally developed for Fortune 500 corporations and other entities to deduce social media trends among consumers and the general public. The command center is available for use by both faculty and students in the College of Communication & Information who want to do their own trend analysis. The benefit extends beyond immediate gauges of ongoing events—users can access 220 billion archived social media posts in multiple languages dating to 2008.

Twitter is the dominant medium, Brotman says, and users of the platform were pumping out both wisdom and banal vulgarities before the debate even began. Some 8.5 million debate-related tweets were recorded via a range of keywords in the lead-up to the debate.

“When history is written,” Brotman says, “I think this will be known as the first, real social-media election.”

As the debate approached, the classmates hashed out who would be live-tweeting, and who would be focusing on policy and “atmospherics” groups.

“One minute!” to go-time, Brotman announced.

Brotman and his students compiled lists of keywords, issues, and potential “flashpoints” prior to the event; the white board in the command center included the words “apology” and “predator,” “personal attacks” and “victims.” As the debate began, Brotman called “an audible,” and told the students to mine references to the words “locker-room talk.” He soon noted there was no handshake exchanged between the candidates, and references to that lack of traditional decorum began to trend immediately.

Based upon Trump’s first few remarks, it appeared the candidate really wanted the keyword “ISIS” to dominate social media discussion.

That is one revealing function of Social Studio, notes student Jamie Grieg, a native of Aberdeen, Scotland pursuing a doctorate in communications law and policy. It’s remarkable, he says, “how social media conversation can differ from what the candidates want to talk about.”

He predicted “women will be a big topic” in the debate, given the fallout from Trump’s misogynistic comments referencing sexual assault recorded by a television crew. He expected a more issues-driven debate, given the town-hall format, and he was right—somewhat.

Social Studio allows for a quantified conclusion. Brotman provided an analysis of the parsed data on Monday just after midnight (download report here):

• Both candidates enjoyed a 10-12 percentage-point increase in positive sentiments after the debate.

• Social media registered a 69 percent negative sentiment following the lack of a handshake between Clinton and Trump at the onset of the debate.

• References to Russia, mostly negative, dominated by a large margin the discussion of issues on social media.

• Clinton racked up a big foreign-policy win, at least on social media: Positive comments were 15 percentage points higher for her than Trump.

That last piece of data was probably especially intriguing to Hurst, a communications studies student interested in migrant and refugee populations.

“I have loved it,” she says of Social Studio. “Think of all the ways I can use it in my research.”

She and Grieg also appreciate the software’s application to their own future bottom lines. “A lot of big organizations are using this tool,” Hurst says, and becoming fluent in its application “puts us up over other candidates for jobs.”

Grieg says social-media experts are in demand, and soon the students will be well-versed in covering what Brotman calls the first campaign to be so steered and measured by the use of Twitter, Facebook, and other applications.

Soon after the start of the debate, moderator Martha Raddatz affirmed his conclusion by explaining to Trump that his sexist statements have been among the most-talked about thing on Facebook and must be addressed. Brotman nodded and leaned over to a reporter and whispered: “Social-media election.”

The next presidential debate is Wednesday, Oct. 19 at 9 p.m. EST. You can track the real-time observations of the Political Science Social Media Group on Twitter @PSMRG_UTK.