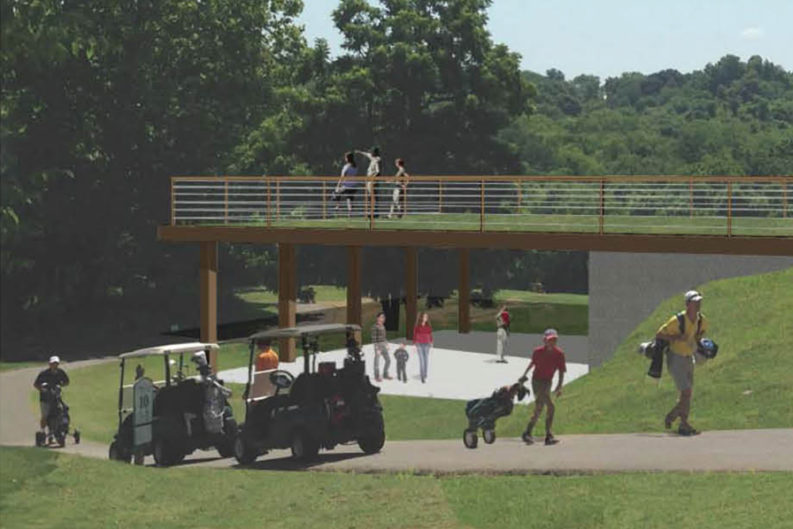 The East Tennessee Community Design Center was founded in 1970, at the urging of influential architect Bruce McCarty, to help provide good design for all sorts of regional building projects.

Originally from the Midwest, McCarty (1920-2013) moved to Knoxville in the late 1940s and became Knoxville’s architect most strongly associated with promoting modernist design in both residential homes and in large public works, like the Civic Coliseum, the City-County Building, and Clarence Brown Theatre.

By the late 1960s, he was concerned that most of the growth in the Knoxville area had been haphazard and careless, and wanted to do something to help before it was too late. He’d seen a model for a nonprofit design center in Pittsburgh, and thought the idea would work in the Knoxville area.

He got together with several others, including maverick University of Tennessee professor Gideon Fryer (1921-2014), and founded ETCDC as a 501(c)(3) nonprofit in 1970. Its purpose was to help schools, nonprofits, and other community organizations create more attractive and functional amenities.

Since then, enlisting the help of architects, designers, engineers, and community leaders, the organization has advised more than 1,000 projects in urban, suburban, and rural settings throughout the region. Current projects include Old City improvements and a proposed recreational Change Center in East Knoxville, along with an expansion of the First Tee golf course at Williams Creek—but also, on the west side of town, Everly Brothers Park in Bearden and the Hardin Valley Academy’s “outdoor classroom.”

ETCDC’s headquarters is located in the old carriage house of Greystone, the 1890 stone mansion on Broadway. However, it’s a regional organization, with projects ranging geographically from a new food and clothing pantry in Madisonville to an effort to reimagine downtown Newport.

Each year, ETCDC offers an awards ceremony to bring more attention to attractive and functional projects. The already-announced honoree of the Bruce McCarty Community Impact Award is architect Faris Eid, who has been designing both new buildings and restoration projects since the 1980s. This year, Eid was in charge of the Lonesome Dove renovation of the 1888 Patrick Sullivan Saloon. They’ll also bestow a new award in honor of former executive director Annette Anderson.

The gala has a Halloween theme (“to Celebrate Scary Good Design”). It will be held at the historic Foundry at World’s Fair Park on Thursday, Oct. 20, from 5:30 to 8:30. It’s a fundraiser, and tickets are $150. Costumes are encouraged. For more, see communitydc.org.

Park City is the historic term for much of East Knoxville, especially along Magnolia Avenue, so named for its proximity to Chilhowee Park. For a short period, from 1907 until its annexation as part of Knoxville in 1917, it was incorporated as its own town. Burlington is a residential and commercial section to the east of Park City, just southeast of Chilhowee Park, whose early 20th-century downtown is still partly intact. It’s located at the eastern end of Martin Luther King, where it intersects with Fern Street and Holston Drive.

Burlington once marked the easternmost point of Knoxville’s streetcar system, which partly accounts for the cluster of commercial buildings there. Burlington included Johnson’s Racetrack, the famous horse and automobile racing track which is now a residential section called Speedway Circle. It once included a movie theater and a small department store.

Knox Heritage is especially interested in reviving that Burlington commercial district with its original buildings, and the nonprofit is leading an effort to get it listed on the National Register of Historic Places, which could provide tax credits for certain kinds of commercial development.

Burlington will be the focus of the meeting, the purpose of which is to invite neighbors past and present to share stories and photographs of the neighborhood, partly to help prepare a historical profile of Burlington.

The meeting will be on Monday, Oct. 17, at 6 p.m. at the Burlington Branch of the Knox County Public Library, 4617 Asheville Highway. It’s free to the public, and a complimentary supper will be provided. For more, see knoxheritage.org.

Featured Photo: A proposed expansion of the Williams Creek Golf Course, home of the First Tee program in East Knoxville, is the 1,000th project of the East Tennessee Community Design Center. Image courtesy of the ETCDC.