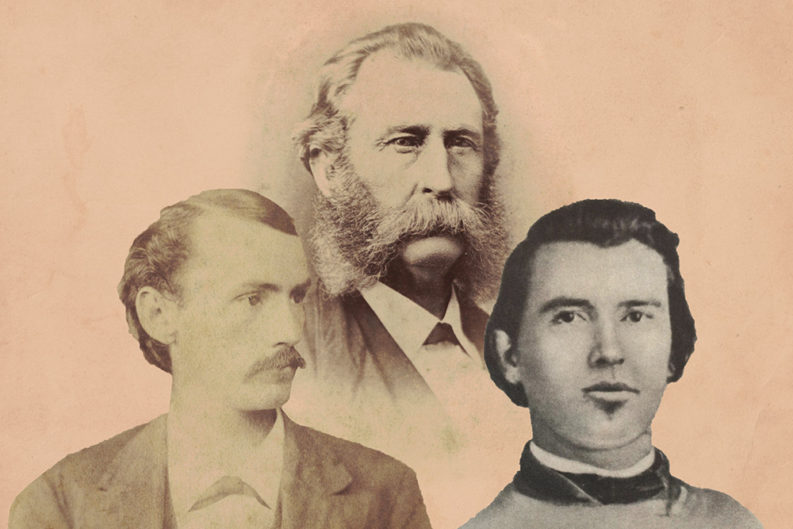 Knoxville’s bicenquasquigenary month presents more ways of seeing our past.

Oct. 9 is the 155th birthday of Knoxville’s most nationally successful studio photographer, Joseph Knaffl (1861-1938). Son of Austrian immigrants, Knaffl worked from a studio on Gay Street, and was famous in the 1890s for his study, “The Knaffl Madonna,” which has been reproduced on 21st-century mass-market Christmas cards.

At the historic Foundry at World’s Fair Park on Friday, Oct. 14, faith-based financial expert and motivational speaker Dave Ramsey is the featured attraction at a fundraiser for Historic Ramsey House, the unusual stone museum house on Thorngrove Pike. (Is he kin? Maybe he’ll clarify.) News Sentinel columnist Sam Venable will serve as host for an evening that also includes a dance accompanied by the big-band Streamliners. Tickets are $100. Check ramseyhouse.org or call 564-0745.

Saturday, Oct. 15 is the 79th anniversary of the current McGhee Tyson Airport. Named for a Knoxville airman killed on the North Sea in the final weeks of World War I, it had previously been located on Sutherland Avenue.

On Sunday, Oct. 16, Mabry-Hazen House on Dandridge Avenue hosts its annual Lineage and Legacy event, an outdoor family reunion to which the public is invited. One of East Tennessee’s most fascinating historic residences, Mabry Hazen was built in 1858 by hot-blooded entrepreneur Joseph Mabry, who co-founded Market Square in 1854—and 28 years later, was one of three shot to death in a gunfight. The program will include a short original play by the Tennessee Stage Company, “Gunfight on Gay Street,” about the bizarre incident that ended the lives of two Mabrys, as well as that of Mechanics Bank president Thomas O’Conner, who shot them both. The event starts at 2:00 and lasts two hours. For more, check mabryhazen.com or call 522-8661.

Meanwhile, the same Sunday afternoon, Oct. 16 at 4-5:30, Central Collective is hosting a walking tour of Greater Happy Holler by the Knoxville History Project’s Jack Neely. Located in a saddle of North Central, just northwest of downtown, Happy Holler was originally a business district for a neighborhood of middle and working-class people, most of whom worked for Brookside Mills, the weaving mill that was for 75 years one of Knoxville’s major employers. The tour will touch on the childhood of future Hollywood director Clarence Brown, and include brief visits to National and Old Gray Cemeteries. Tickets are $16. To make a reservation, see thecentralcollective.com.

No one knows more about the history of Knoxville’s most independent-minded suburb, Fountain City, than Dr. Jim Tumblin, the genial scholar who writes the colorful and well-researched “History and Mysteries” column in the Shopper News. On Thursday, Oct. 20 at noon, he’ll be talking about his recent book, Fountain City: People who Made a Difference, a brown-bag discussion at the East Tennessee History Center.

Knoxville’s once-grand, 1919 Farragut Hotel, at the corner of Gay and Clinch, is becoming a hotel again. On Friday, Oct. 21, Knox Heritage is giving a members tour of the place where the New York Yankees stayed in 1934—and where, a couple of years earlier, more than 100 administrators and coaches got together to found an athletic organization called the Southeastern Conference. It also witnessed, in the 1920s, the early evolution of the Knoxville Symphony Orchestra and some of the planning for the Great Smoky Mountains National Park. Although most of the original interior has been modified away over the years—it was an office building for over 30 years—the original ballroom is intact, and will be part of the Hyatt project’s final product. Tours start at 5 p.m. KH Memberships start at $25, and can be arranged at the time of the event. For more information, call Knox Heritage at 523-8008.

On Sunday, Oct. 30, at 2 p.m., Jack Neely, of the Knoxville History Project, will give a talk entitled “Subterranean Knoxville: The Buried Narrative of a Distracted City” at UT’s McClung Museum, to accompany the current archaeological “Knoxville Unearthed” exhibit. The lecture, part of a series, is free.

Featured photo: The Mabry-O’Conner Gunfight: On Oct. 19, 1882, these three men died on Gay Street within moments of each other. At left is Joseph Mabry III, a young attorney. At top, his father, Joseph Mabry II, prominent businessman who founded Market Square. At right, bank president Thomas O’Conner. The gunfight is the subject of a play, open to the public, at the Mabry-Hazen House on Oct. 16. Images courtesy of the Calvin Chapelle. Executive Director Mabry-Hazen House.