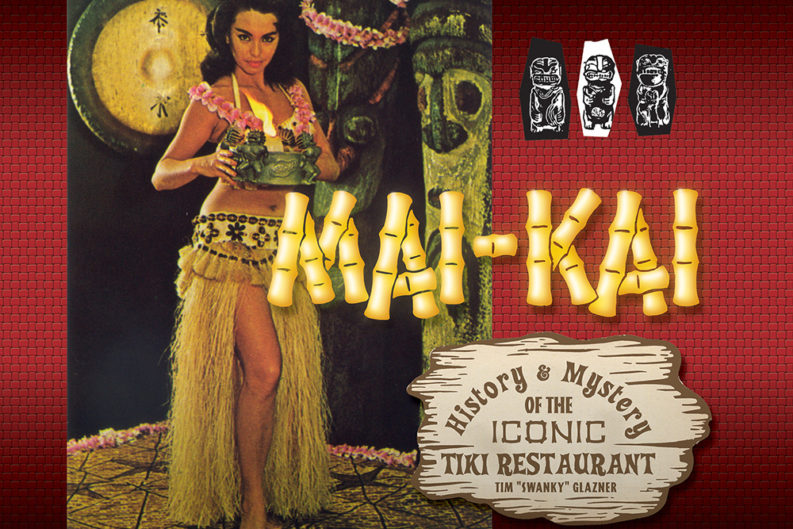 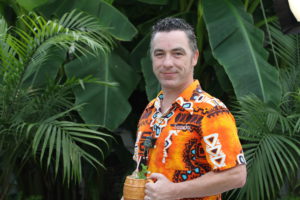 North Knoxville’s Tim “Swanky” Glazner is one of the nation’s leading experts on tiki. How does a former punk rocker become an authority on the Polynesian pop-culture trend that consumed midcentury America’s collective imagination?

Thrifting. Knoxville’s second-hand shops in the 1980s were chock-full of Atomic Age ephemera that’s now highly prized. Back then, such items were considered kitschy leftovers from a forgotten era, but Glazner began filling his home with vintage clocks, lamps, radios, sharkskin suits, and LPs. The snarling visage of the tiki became a recurring presence. In 2002, Glazner organized a tiki convention at Trader Vic’s in Atlanta called Hukilau—Creative Loafing named it the event of the year. His tiki empire grew with a website, his own line of tiki products, and a full-blown tiki bar, the Hapa Haole Hideaway, in his home.

His latest tiki achievement is a lushly illustrated coffee-table book devoted to Fort Lauderdale’s Mai-Kai, one of the last great tiki bars in the world. Mai-Kai: History and Mystery of The Iconic Tiki Restaurant (Schiffer Books) shows how tiki is more than just campy fun—it can serve as a genuine way of life involving relaxation, complex mixed drinks, and a good deal of sex appeal. He will be signing books and serving up Jasper’s Jamaican cocktails on Friday, Oct. 7, at POP Weasel Emporium.

You’re a longtime Knoxvillian, landlocked in Tennessee. How did you first discover tiki?
I’ve been collecting stuff from the ’50s and ’60s since I started hitting thrift stores here in the 1980s. I filled my home with vintage clocks, lamps, radios, sharkskin suits, and LPs. I visited Trader Vic’s in Atlanta around 1990 as just another funky vintage hold-out among many. In 2002 we wanted to do an event and had considered maybe a rockabilly event at a vintage hotel in Pigeon Forge when an opportunity came along to do an event at Trader Vic’s. I christened it “Hukilau” and it was named the event of the year by Creative Loafing magazine in Atlanta. From there it just exploded. The tiki era hit its peak around 1955-1960.

What is it about tiki that appeals to you?
Putting the primitive beside the modern and atomic-era furnishings is a perfect contrast. Like my midcentury collection, it was something you could collect for cheap and very intimately interact with it. You can mix up a 1940s Mai Tai recipe, pour it into a 1950s tiki mug, dress in a 1960s aloha shirt, and play old exotica records surrounded by vintage ephemera in your home tiki bar. You can even collect vintage rum. It is a fantasy land in your home—an escape from your daily grind. Inside the bar the rest of the world can be very far away.

How deep does your tiki obsession go?
I’m just your typical obsessed collector. I’ve been known to spend a weekend driving cross-country to bring home a massive piece of wood because it used to be part of a tiki in the Mai-Kai, though now it is just unrecognizable rotten wood. I still get 20-30 emails a day from eBay, but rarely anything I am interested in. My collection is pretty complete. But these days I am tracking down the descendants of Don the Beachcomber and people who were his friends to try to piece together his life. I’m collecting stories and anecdotes instead of mugs and menus.

Why did you choose the Mai-Kai as the subject of your first book?
I’ve been very involved with the Mai-Kai since we moved the Hukilau event there in 2003. The Mai-Kai chose me. I was collecting stuff and stories for years. One day I was feeling very weird. I was having a sort of anxiety attack and I just could not get calm. I went in the dark, quiet bar and started meditating and after about 10 minutes of silence I heard the answer. “You have to write the book. You’ll never rest until you tell their stories.” It was clear as day and I started right then.

Is the place still authentically tiki today?
It is the last real vestige of tiki’s heyday, and they still keep everything as close to the early days as possible. The whole place is tradition, from the white pants and dark-jacketed maitre d’ that greets you to the rain on the windows of the bar. But one of the things that is really unique and goes back a long way are the drinks. The Mystery Drink is a crazy performance piece that started in 1958. A 28-inch gong resonates across the whole place and a lovely maiden in a sarong brings out a massive flaming drink bowl, puts a lei around your neck and a kiss on your cheek, does a sort of hula swaying dance and bows, then walks away. It’s mesmerizing. The Kona Coffee Grog is another show tableside, pouring long ribbons of flaming 151-proof rum into a wonderful coffee cocktail. That drink performance started nearly 80 years ago in Hollywood at the original Don the Beachcomber.

What sort of research did you undertake to tell its story?
I was hearing stories from the first visit in 2003. When Mai-Kai founder Jack Thornton passed away in 2008, I couldn’t believe I had never talked to him. So many stories were suddenly gone. That’s when I started tracking people down for interviews. I’d search Google for phone numbers and addresses and call them up. I really didn’t know if there was ever going to be a book but I introduced myself as someone writing a book about the Mai-Kai because that sounds a lot better than just being a weirdo tiki-obsessed fan. I’ve been collecting ephemera and stories for 13 years, but really started in earnest a couple of years ago when I realized the Mai-Kai’s 60th anniversary was coming up. That seemed like the ideal time to stop and write what I had. Otherwise I might have kept researching for many more years.

Did you uncover any surprising tales?
The big surprise was Bob Van Dorpe. I had never heard of him when I started researching and then realized none of it would have happened like it did without him. He was there from the earliest days. And then I found out that he became best friends with Don the Beachcomber. It was sensational. Donn Beach is a god to tiki fans. We’d all love to time-travel back and meet the man. Now I was talking to his soul brother. He’d worked with him and was at his bedside when he died and arranged his funeral. It was an amazing connection among many.

The book is very visual, with photos from the Mai Kai’s long history—how did all those images get collected?
Some showed up on eBay, but most are from scrapbooks and photo albums of the Mai-Kai and people I interviewed. The Mai-Kai had its own photographer and a newsletter and calendars. It is a very well documented place thankfully. The Thornton brothers really worked the media well.

How is tiki culture today different than during its heyday?
In the heyday, we wouldn’t have gone to Don the Beachcomber’s or Trader Vic’s. First it was too expensive and second we’d have needed a coat and tie. They were top-tier restaurants. Not many places like that exist now, and no tiki establishment is like that anymore. Trader Vic’s is pretty fancy, but they will not turn you away if you aren’t in a sport jacket, but you still can’t wear a hat in the Mai-Kai’s Molokai Bar. It’s all much more relaxed. Thankfully the new crop of tiki bars have the correct vintage Don the Beachcomber drink recipes and are very eager to make them correctly. There were many decades of bad rip-offs and then just devolved drinks in the ’80s and ’90s. The recipes had nearly died with Donn Beach himself. This era of craft cocktails has perfectly dovetailed with the tiki resurgence.

Tim Glazner signs copies of his new book, Mai-Kai: History and Mystery of The Iconic Tiki Restaurant, at POP Weasel on Friday, Oct. 7, from 6:30-8:30 p.m.