Searching for Mushrooms with the Fungi Forager - The Knoxville Mercury 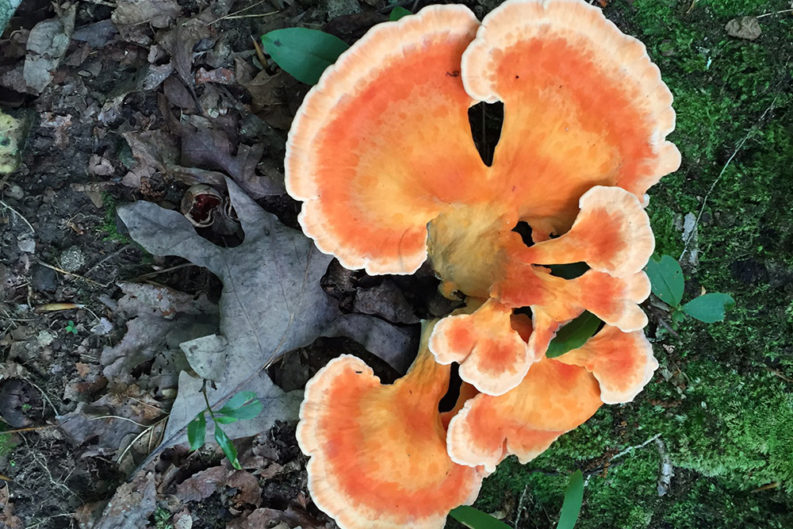 A friend of mine showed up on my doorstep earlier this month. She was fresh from a foray into the woods, carrying an old Kroger bag full of odd-shaped fungi that smelled of damp earth, which she suggested we eat.

Growing up in Middle Tennessee, my family cooked with foraged food like blackberries, chestnuts, persimmons, and even potentially poisonous plants like poke salad (boiled to death in plain water). We kids grazed on wood sorrel, lamb’s-quarter, and wild garlic, and our parents tolerated it. But mom and dad put the kibosh on wild mushrooms, which we were told could be deadly. The only mushrooms I ate were the little white kind from the grocery store.

In recent years, wild-foraged mushrooms have enjoyed a resurgence in popularity, partly due to the mainstreaming of the “eat local” movement and renewed interest in traditional Appalachian culture and food.

For amateur foragers, edible mushrooms can be difficult to locate, or to distinguish from poisonous varieties. My friend had forayed into the woods with an experienced guide, Whitey Hitchcock. 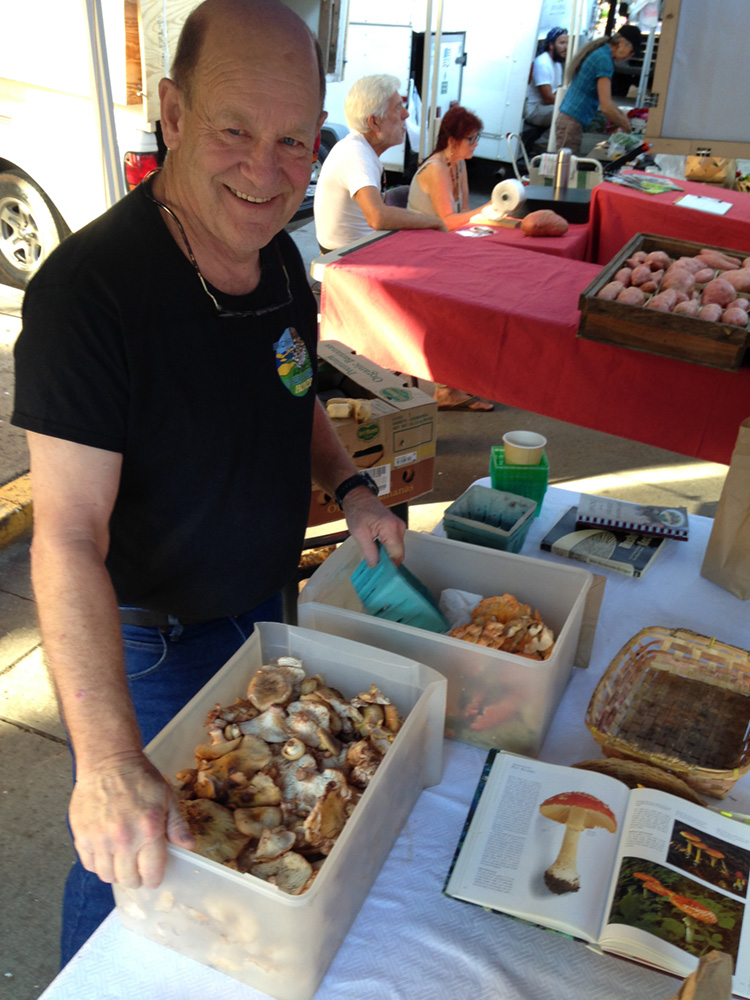 Twenty years ago, during Hitchcock’s first year teaching high school, he invited a mycologist to speak to his class about fungi, a subject he knew nothing about.

“She got me interested,” Hitchcock says, “I don’t know about the students, but I was.”

This spark of interest developed into a passion, and eventually, a career. Now retired from teaching, Hitchcock is known as the Fungi Forager, selling wild mushrooms to local restaurants and leading mushroom-foraging expeditions. He has a master’s degree in forestry and a Ph.D. in education. He also happens to be an Anderson County Commissioner.

I caught up with Hitchcock at his booth at the Market Square Farmers’ Market. Wearing his green “Virginia is for (mushroom) lovers” T-shirt,  Hitchcock is a friendly old-timer, calling me “Little ’Possum” and rattling off Latin names in a Southern accent.

Hitchcock pulls out plastic bins to show me the assorted fungi for sale. He says all mushrooms are from within a 50-mile radius of Knoxville. Throughout the year he sells 12 edible species harvested in season. In early fall, he is selling three: cauliflower mushrooms,  honey mushrooms, and chicken of the woods.

Of the three, only the honey mushroom, a gilled fungi, has poisonous look-alikes. To be on the safe side, Hitchcock avoids the entire genus of amanita, which contains amanita muscaria, the famous red-capped, white-speckled, sometimes-deadly toadstool. He also avoids mushrooms with brown spores.

Cauliflower mushrooms, so called because they resemble a head of cauliflower, are found on dead or dying pines. Cooked, they have the texture of seaweed. Honey mushrooms, with caps the color of honey, have the most familiar shape and texture, like grocery store oyster mushrooms.

My favorite, chicken of the woods, is an orange-and-white bracket fungi that grows on decaying hardwoods. Over the sink, I shredded the mushroom with my fingers, rooting out the tiny beetle larva that burrow into the flesh. When I was fairly certain I had removed all the vermin, I fried the shredded mushrooms in butter with white wine and salt. It had the same texture as chicken. The flavor, in the first mouthful, did not recall damp logs or mossy woods, as I expected of traditional rustic food. Instead, I flashed back to an expensive meal, a pasta entree, eaten years ago at a fancy Italian restaurant. It was a flavor I associated with white tablecloths, sparkling wine glasses, good manners—a rich, cosmopolitan taste. Scarce and elusive forest dwellers, wild fungi have a presence concentrated on the both ends of the gastronomic spectrum from backwoods fare to high cuisine.

Hitchcock sells wild mushrooms to Echo Bistro in Bearden. Another customer is the chef Bruce Bogartz, who has just left Primo, in the Sunsphere, to open Tata Creole Corner, a pop-up restaurant on North Broadway. Hitchcock will provide the mushrooms for a six-course meal hosted by chefs Daniel and Rebecca Saldivar, owners of the Tootsie food truck, on Oct. 28 at the Central Collective.

Back at his booth, Hitchcock shares his Grandpa Mushroom recipe, which he often prepares for himself: Chop up a quarter-pound of chicken of the woods, fry in butter and olive oil, and scramble with eggs. He calls it Grandpa Mushroom because it’s a dish one can eat without teeth.