Reeking of the usual quiet desperation, I needed a cleansing session of forest-bathing, or shinrin-yoku—a kind of wellness therapy researched by the Japanese for over 30 years, reputed to prevent disease, relieve stress, lower your blood pressure, boost your immune system, and generally improve your well-being. What better place to go forest bathing than among the oldest trees in the Great Smoky Mountains National Park, on the Boogerman Trail loop in North Carolina’s Cataloochee section of the park?

After a two-and-a-half-hour drive (two from Knoxville), I was the first one at the trailhead, at Caldwell Fork Trail, a little before 8 a.m. Right away, my sense of touch was engaged by a feeling that I had not experienced in months: cold. The temperature was probably in the mid-40s.

After eight-tenths of a mile, I crossed the creek on the second footbridge and paused at the sign for the Boogerman Trail, a left turn off Caldwell Fork Trail. I gazed upward into the yellowing canopy and contemplated the tick-tick of accumulated moisture passing from leaf to leaf. There was the sound of my own breathing as I began to ascend the ridge, puffs of vapor fleeting and faint. 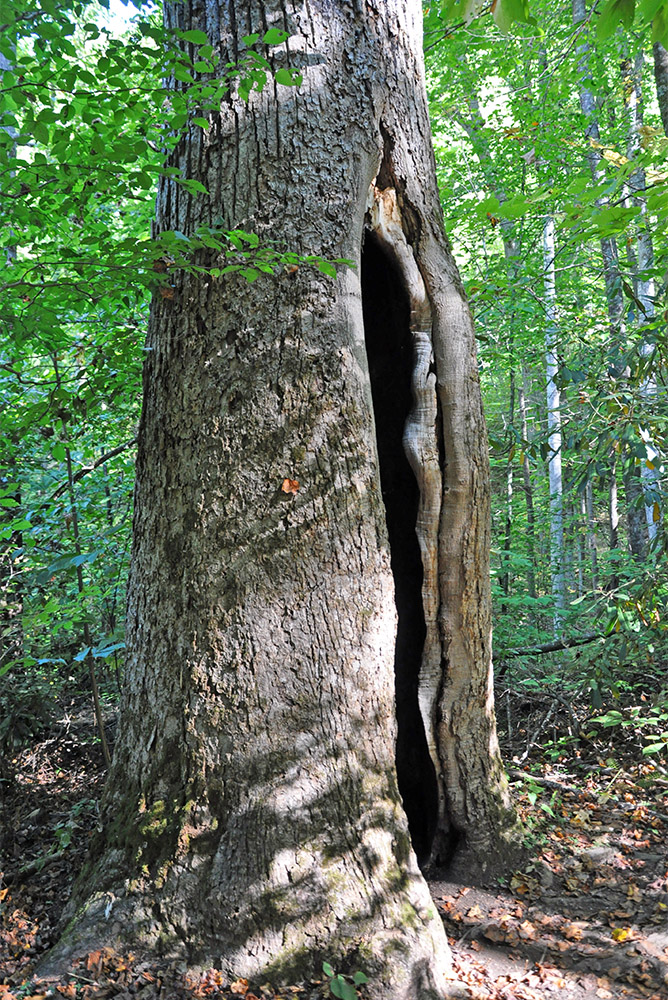 I made myself bite into one of the red berries at the edge of a trail—a partridge berry, I knew, not poisonous but not very tasty, either. I spit a few times, but I was happy to have checked off the five senses of forest-bathing in the first mile.

The ascending trail curved east, and the sun, just risen above the ridges, suffused the trail with a welcoming glow at odds with the trail’s name. Robert Palmer, who owned this land before the park system purchased it from him in 1929, obtained the nickname Booger, according to Hiking Trails of the Smokies, when a teacher asked him what he wanted to be when he grew up. He gave a great answer to a mundane question: “The boogerman!”

A boogerman (or boogeyman or bogeyman), according to my experience, is a nasty character who oppresses children. My grandmother used to say, “If you don’t behave, the boogerman will get you!”

I feared the boogerman as a child, though as an adult, hiking a trail named after a supernatural hobgoblin seemed quaint and endearing. Palmer, who never allowed his acreage to be logged, must have been a mischievous guy, perhaps a bit of a smart-aleck as a kid. In Kenneth Wise’s account, though, the teacher asks Palmer his name, and he’s so shy that “boogerman” is all he can come out with.

Staying in the spirt of forest-bathing—going slowly—I took another break to consult the Smokies guidebook to see if I should start looking for landmarks such as the hollowed-out tulip tree big enough to stand inside.

As I arose and half-turned to hoist on my backpack, the boogerman appeared on the trail five feet behind me. “Oh shit!” I said.

“I’m not a bear,” said the young hiker. He grinned and walked on past, speedy and very quiet.

Another mile in, I sat in what I call a tree throne at the base of a chestnut oak whose trunk was so massive it had to be two centuries old.

I climbed to the top of Den Ridge and began my descent toward another junction with Caldwell Fork Trail, which would lead back to the parking lot.

Thinking about the traffic on the way home, I increased my pace. The last 11 miles of driving had involved a road so curvy that a couple of signs set the speed limit at five miles per hour. A few miles of it had been narrow, bumpy gravel that would be treacherous in heavy traffic.

I paused in the white-pine grove where Booger had lived and farmed. He built a 100-yard-long stone wall that still stands.

Contemplating poor Booger Palmer building this thing, stone by stone, made me more tired than I already was after having hiked about four miles. It was evidence of work, and forest-bathing was the opposite of work. Perhaps Palmer would have scoffed at the notion of forest-bathing. Or maybe not. Having protected his trees from the axe, he had walked the walk of a conservationist.

I did find the tulip tree, the biggest one, by my estimation, that I’d seen on the hike. The hollowed-out trunk would make a great shelter for a small group waiting out a rain.

As you meet up with Caldwell Fork trail again, you have 2.8 miles to go. I was really tired, my forest-bathing mood long gone, and I quickened my pace to end the hike and get back to my car.

Though the old growth diminished on this last stretch of trail, the creek crossings (without bridges) increased. Most of them were fairly easy, but a few required a bit of strategizing and hopscotching to get across with dry feet. (A hiking staff/pole really helps, too.) Looking back, the mindfulness required of stepping across a cold rushing stream seemed the closest I’d come to the true spirit of forest-bathing.

Three or four of the log bridges had deteriorated, the hand rails completely or partially gone, but they all held, and I was back at the car around noon, a seven-plus mile hike that took about four hours. I had failed at walking slowly and also at walking fast. 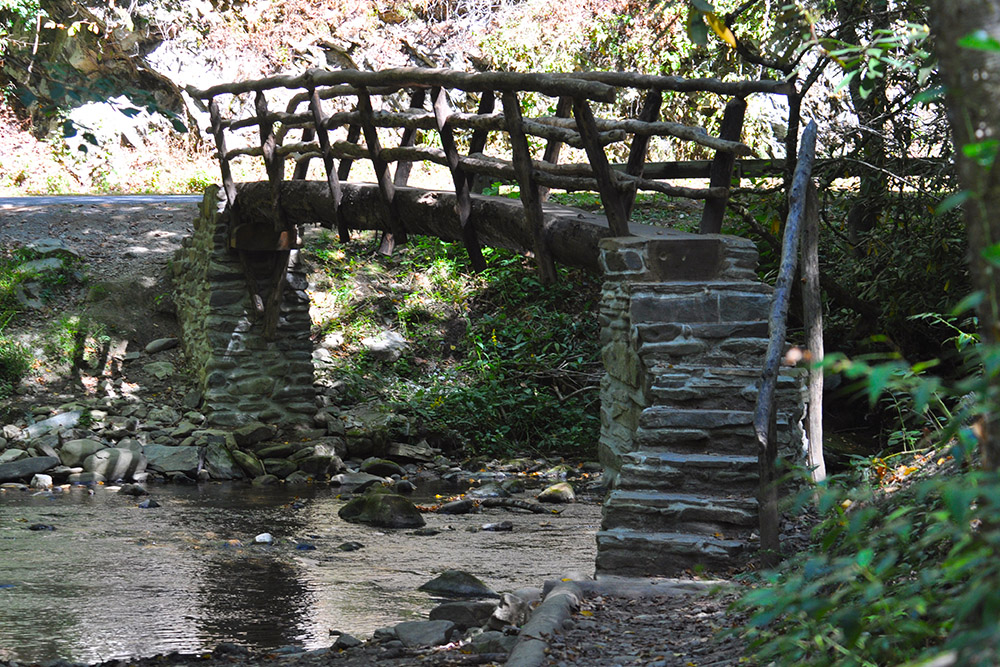 I think the Boogerman loop might have been a bit too long to maintain a shinrin-yoku state of mind, but it felt good anyway, and I think it’s well worth the drive. At the beginning of the loop, there are views of the valley and adjoining ridges that promise to fill up with fall color in the coming weeks.

Full disclosure: On the way out, in that hairpin-heavy gravel section that I was dreading, I did meet two pickups pulling big wide horse trailers. I had to back up the Subaru and get as close as possible to the drop-off at the edge of the road to let these guys pass. We had a foot or so to spare, and one of them rolled down his window and thanked me.

Further disclosure: I went last Saturday, Oct. 1, and it hadn’t rained in a while. I imagine that sections of this trail get very soggy after rain and that the creek crossings become a little less meditative and more problematic.

How to get there: Take Interstate 40 east to Exit 20 in North Carolina. After exiting, take an immediate right on Cove Creek Road. It’s about 11 miles from there. Just past the campground, on the left, you’ll see the Caldwell Branch trailhead on the left at a footbridge that crosses Cataloochee Creek. 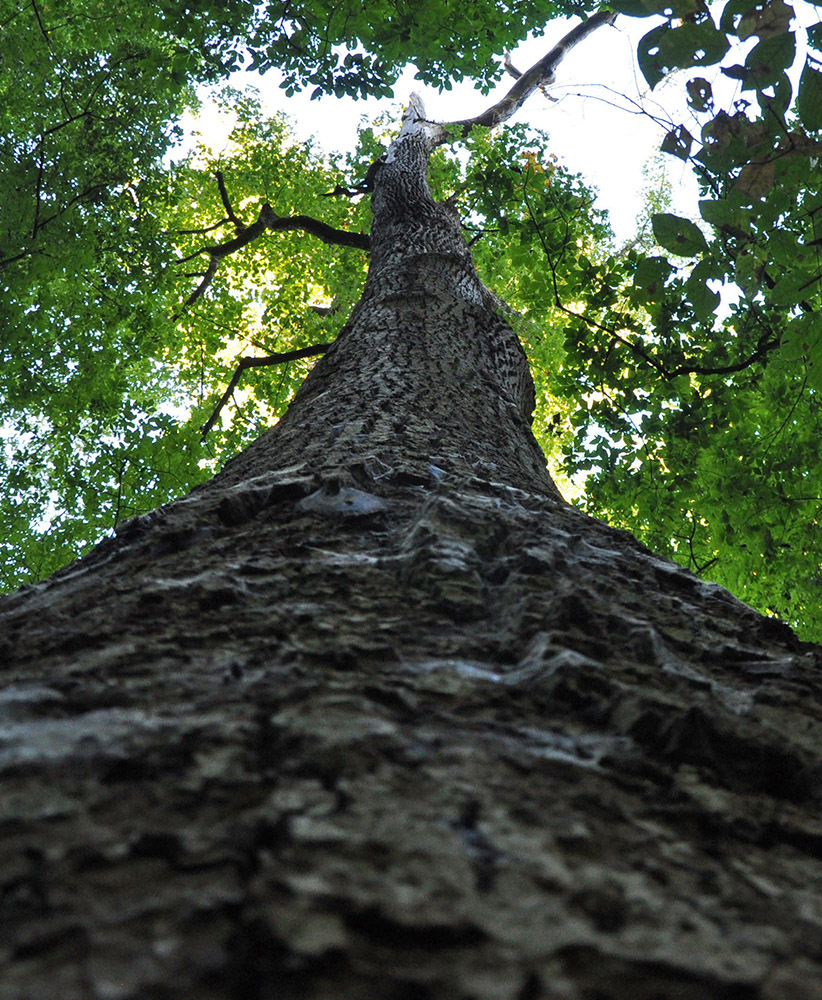