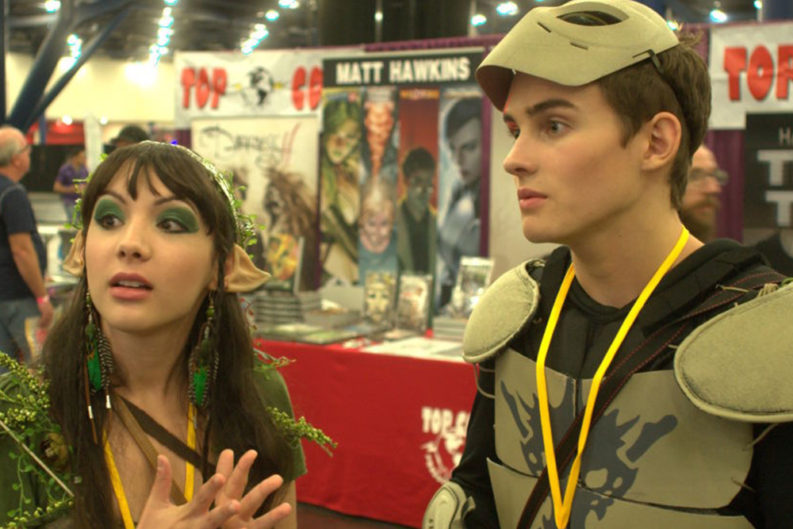 In my research for this review, I explored the underworld of fan-created filth, just to see how deep and broad it goes. My search for a pairing of Cuzco and Kronk, from The Emperor’s New Groove, turned up empty-handed, and the results for Brian/Dom, from the Fast and Furious franchise, were underwhelming and uninspired. But I did find one glorious piece of prose that coupled Jeff Goldblum and a dinosaur, which used a brilliant, blush-inducing—though regrettably unprintable—alliteration to describe Goldblum’s genitalia. I don’t even want to tell you what I found about Minions.

The sheer breadth demonstrated by my small sample survey of slash fiction only hints at how much of this outsider content is out there. It’s safe to assume that millions of people, young and old, have used slash fiction to explore and express their own sexualities in a world still hostile toward fluidity and experimentation. It’s surprising, then, that Clay Liford’s new film, Slash, is among the first to truly give the subject its due.

The protagonist is Neil (Michael Johnston), a teenager in Texas who is shunned at school but comes to life in front of his computer screen, where he constructs lurid prose about a sci-fi series called Vanguard. After his private obsession is outed at school, Neil falls for fellow fan and cosplayer Julia (Hannah Marks), who encourages his talents as a writer and soon becomes the object of his sexually confused affections. Their back-and-forth relationship culminates in a testy weekend at a comic convention that decides their future not just as fanfic writers, but also as friends.

Neil and Julia often cite the Brontë sisters, who supposedly wrote fanfic about Napoleon and the Duke of Wellington. This historical tidbit, along with the film’s occasional nods to queer and feminist theories, demonstrates the significance of this once disregarded subculture. Slash uses that significance as evidence that a hobby some disapproving parents might consider deviant behavior is a lot more normal than it’s usually characterized.

Erotic fan fiction isn’t just an expression of sexual identity—it’s a form of empowerment. In Slash, Liford succeeds at normalizing fan behavior for skeptical audiences. But he’s not as successful navigating his characters’ sexualities. Neil is confused about his orientation, but most of his attention—and most of the film—is devoted to his standard hetero relationship with Julia. Julia is not much more than a rote collection of “bad girl” signifiers: She smokes, she swears at teachers, she wears globs of eye makeup, and her best friend is pregnant. Her own struggles with sexual identity humanize her, but that’s barely hinted at.

Sexual fluidity is hard to come by in coming-of-age films. The bookish, sensitive, insecure white male teenager is, by this point, a familiar and increasingly uncomfortable trope; the slash-fiction context and sexual questioning might be new, but not much else in Slash is. In a universe where Jeff Goldblum shacking up with a dinosaur can be presented with eloquence, it’s disappointing that Slash doesn’t offer more. Maybe it’s up to the future authors of Slash slash fiction to draw that out.

The Public Cinema series will screen Slash at Scruffy City Hall on Wednesday, Oct. 12, at 8 p.m. Admission is free.