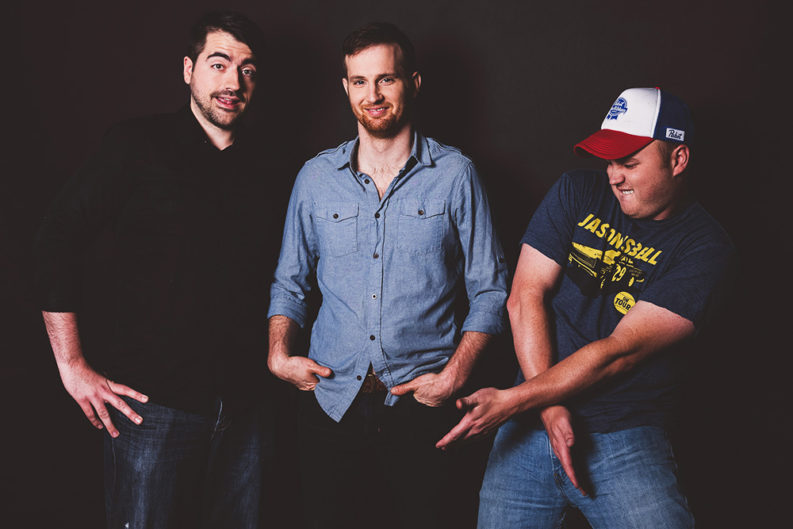 Skew! The Liberal Redneck comedy trend born right here in Knoxville just ain’t a joke any more. The East Tennessee comedy crew of Trae Crowder, Drew Morgan, and Corey Forrester took the best comedy clubs in the country by storm this summer at the same time they were writing a book that debuts next week. And this month Crowder will be making the late-night TV circuit, including a profile on Nightline, before headlining the Scruffy City Comedy Festival here in November.

The local comedians (Morgan is originally from Sunbright, Crowder from Celina, and Forrester from the Chattanooga area) launched their wellRED comedy tour in May after Crowder’s twangy back-porch rants gained a cult following on social media. Transgender bathroom bills, racists, and religious conservatives “get his red up.” The Knoxville-based comic has continued to post these hilarious screeds, plus online commentary videos in which he plays all the parts for The New York Daily News, where he is “Hillbilly-in-Chief.”

The wellRED tour quickly graduated from a couple of weeks bouncing through the South to selling out shows from Washington, D.C., to California. It’s now booked through the end of the year. While swept up in this unexpected whirlwind, the three comics committed their creed to paper; The Liberal Redneck Manifesto: Draggin’ Dixie Outtta the Dark hit bookstores and digital shelves on Oct. 4.

Crowder is also scheduled for a slew of TV appearances in October: Nightline; an interview on Fox News’ Greg Gutfeld Show (that got postponed for the second presidential debate, but will happen); and the Oct. 15 episode of HBO’s Real Time With Bill Maher. A BBC special about transgender bathroom bills will also likely include an interview with Crowder and excerpts from one of the wellRed shows, recorded live. Morgan will tell a story on MTV’s The Epic Party Show in mid-October, too.

Morgan was a public defender in Knoxville before moving to New York City to pursue his stand-up career. Last week he shared some impressions from the road and insights into the new book.

The tour has possibly been better received outside the South, Morgan says, but he and his colleagues frequently encounter surprise that these Southern white guys are expressing their real—liberal—opinions.

“Last night in San Jose, three people came up to us after the show and said they were just walking by and decided to come in,” Morgan says. The two Latina women and a black man voiced wonder as they asked, “Are these people [in the audience] real? These white people supporting you guys?” Morgan says.

For Morgan, the highlight of the tour was not at a world-class comedy club but a performance at Johnson City’s punk dive the Hideaway.

“It was standing-room only,” he recalls, with people “whooping and hollering.” A guy who had been blowing a kazoo rolled something onto the stage, and Forrester jumped back, thinking it was an explosive. When he realized it was a can of pork and beans, he popped the top and ate it onstage to the roar of the crowd.

The guys were telling jokes at night and writing a book during the day. It was originally envisioned as something fairly light, along the lines of their Our Sundy Best blog. But Morgan says their agent told them, “Your message is more important than that, and I think you should do a manifesto.” They immediately erupted in laughter, because Morgan and Forrester had mocked Crowder for years using the same word. The inside joke was breaking out into the world.

“‘Manifesto’ was tongue-in-cheek, but that’s what it really is,” Morgan says. At their stand-up shows, the point is to make people laugh. For Morgan, the main goal of the book was to say, “This is who I am. This is who we [Southerners] are. And we’re growing.”

The writers perform some interesting contortions, because they are in essence writing for two different audiences: progressive yet pretentious non-Southerners who need to be educated about addiction and poverty; and Southerners who need to stop letting themselves to be manipulated by rich corporate and political interests.

The book starts off debating the many connotations of the word “redneck” and related labels, and how those have played out in culture and comedy. Their “Dark Foxworthy” bit—aka, “What If Jeff Foxworthy Had No Filters?”—is rich.

The manifesto is definitely funny, but it’s also well-researched and biting, and dead serious in the same way as having a come-to-Jesus talk with your alcoholic brother. I was as likely to read parts out loud to my husband because the facts made me angry as because it was funny. (Yes, I learned stuff.) The book is full of footnotes, which start out mostly as amusing sub-commentary until actual legal citations and scientific studies creep in.

Morgan says he and his friends wrote the book “like the Internet reads.” Chapters on cultural issues ranging from food to racism are punctuated by “porch talks,” with the individual comics telling personal stories related to the topic, as well as the occasional flowchart with titles like “What to Do With Your Food Stamps.” (Hint: “Buy food” is only one option—and not the one that “hits,” as the guys put it.)

Morgan’s favorite chapters provide an analysis of why religion and guns each hold such sway in the South. “We’re super-Southern. We like guns,” Morgan says. “We don’t like AR-15s, and we don’t like how, if you even suggest any type of gun reform, people freak out and try to ridicule you and act like you are a radical.”

What’s next? Crowder is headed to Los Angeles early next year to work on some yet-to-be announced projects. (An alum of the NBCUniversal Late Night Writers Workshop, he had been concentrating on writing pitches for TV until the Liberal Redneck videos blew up.)

Morgan says he and Forrester plan to pitch a Kings of Comedy-type wellRed television special early next year (with Crowder involved), before heading back South to work on an idea for an unscripted Southern social commentary show. “Imagine if The Daily Show had been hosted by Mark Twain,” Morgan says.

This story was updated to indicate a change in timing of one of Crowder’s television appearances.