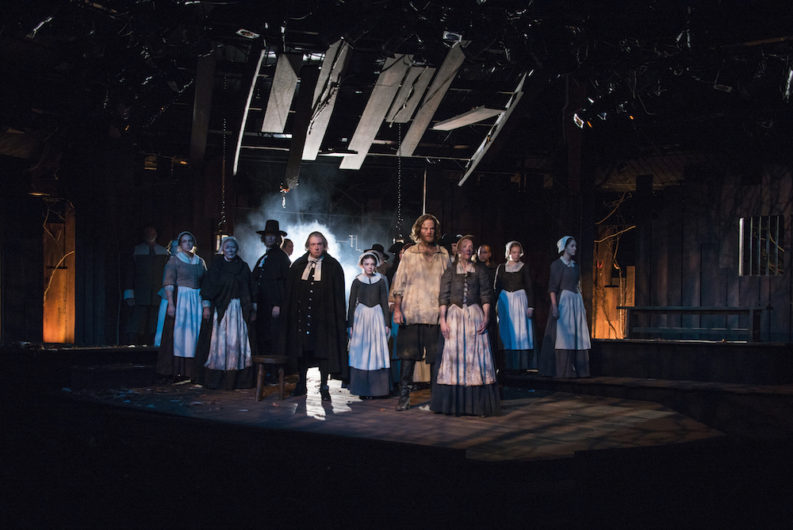 The Crucible, Arthur Miller’s regularly revived dramatic take on the Salem witch trials—now running at the University of Tennessee’s Carousel Theatre, in a Clarence Brown Theatre production—has its roots in Miller’s own experience in the 1950s with the tyranny of McCarthyism and the House Un-American Activities Committee. The play’s warning against irrational fear and hypocrisy has been valid throughout its life, since the first Broadway production in 1953. In the American political environment of 2016, its warning seems all the more relevant.

Although Miller drew all of his characters directly from the available history of the Salem witch trials, his theatrical narrative has elements of both altered fact and fiction. Miller’s plot revolves around a farmer, John Proctor (played in CBT’s production by Grant Goodman), and his wife, Elizabeth (Jenny McKnight), who, along with other townspeople, are falsely accused of witchcraft by local children. One of the accusers is 17-year-old Abigail Williams (Lauren Pennline), a niece of the local minister, the Rev. Samuel Parris (Terry Weber). Abigail, who had been a housemaid for the Proctors until Elizabeth discovered her affair with John, moves between vengeance and self-protection, mindful of her own disingenuousness but unable to extricate herself. The accusations snowball, starting an inquisition led by the sanctimonious Parris.

Director Calvin MacLean has crafted a compelling production, emphasizing character development and narrative in a relatively simple physical environment and with the visual metaphor of constrained stage movement. Goodman, last seen here in the 2015 production of A Midsummer Night’s Dream, depicts a man capable of surprising philosophical depth. Proctor is an honest man who battles human weakness, prone to emotional outbursts and physicality and unwilling to accept injustice. As Elizabeth, McKnight carefully portrays a resolute woman, blessed (or burdened) with an unbending moral compass—and forced to lie to save her husband’s life. Her transformation in facing their final crisis was remarkable.

The most stunning transformation, though, is that of the Rev. John Hale (David Brian Alley), a minister who has been investigating local witchcraft. Hale, who prides himself on his knowledge of demonic evil, wholeheartedly embraces the effort to root it out. But he eventually realizes that the Salem court is abusing justice, not serving it, and he encourages the suspects to falsely confess in order to save their lives.

Designer Ron Keller’s set of rough-hewn boards, aided by the lighting of Kenton Yeager, created a sense of depth in the limited space of the Carousel Theatre. Joe Payne’s impressive soundtrack of music and environmental effects was immersive and beautifully subliminal.

The lasting value of The Crucible lies in its ability to have us question the nature of evil and the motivations of those who claim to want to vanquish it. The real evil, as history tells us, resides inside us, as fear and hatred. One hopes that is a lesson we will eventually learn.