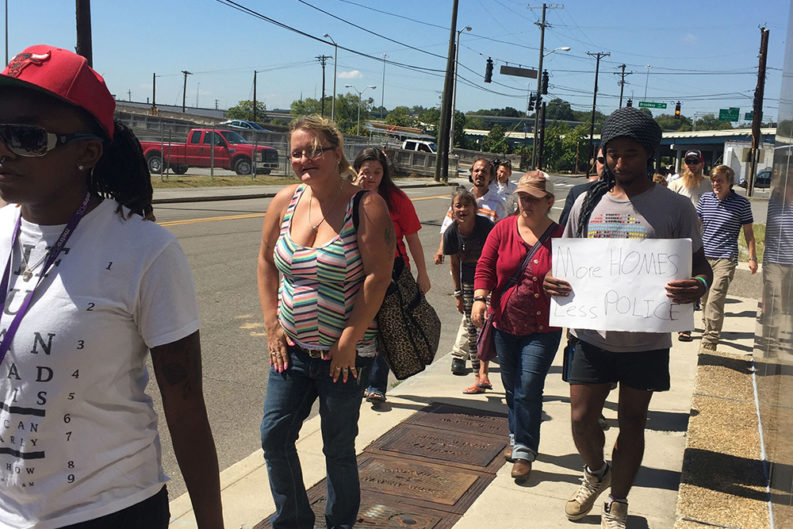 This story has been updated to add comments from the mayor’s response letter provided yesterday.

Mayor Madeline Rogero provided a written response Tuesday to demands presented at a protest last week by the Knoxville Homeless Collective, which accused the city of criminalizing the homeless. But Rogero indicated she would not grant their chief request of putting a “Homeless Bill of Rights” on the City Council agenda.

The collective seeks a city regulation that would prohibit discrimination based on housing status and create a “safe zone” where the homeless could rest and do other life-sustaining activities without fear of arrest or police harassment.

Last Wednesday, about 25 people walked—some with the aid of walkers, some struggling in the hot sun, others being pushed in wheelchairs—from Depot Street in the Mission District through the Old City to present a letter to Rogero, accusing her of “silence and compliance” while police conduct “illegal camp evictions” and “illegal arrests” of the homeless.

Members of the collective later posted on the group’s Facebook page: “She refused to answer this, what happens to homeless folks when they can’t camp anywhere (private nor public) without eviction or harassment by KPD?”

Rogero’s written response takes a defensive tone and challenges the collective to work more collaboratively with the city. (Download both letters here.) The mayor indicates she has met four other times with members of the collective, a grassroots group of the homeless and recently homeless that is supported by the East Tennessee Peace and Justice Center.

In her letter, Rogero expresses frustration that a spokesperson (who is not homeless) would not allow her to respond or ask questions of the homeless protesters last week. Her letter claims this person “rudely and consistently interrupted our conversation as she filmed the meeting on her cell phone” and cut off the dialogue by dramatically insisting that collective members leave while Rogero was still attempting to talk with them.

Rogero, whose current city budget includes about $900,000 for homeless services, also leads the Mayor’s Roundtable on Homelessness. The Homeless Collective is represented on that roundtable, but has never sought to discuss the Homeless Bill of Rights in that forum, Rogero states in her letter.

This document was presented to the city earlier this year. In a March response addressed to Peace and Justice Center founder Eddie Young, Knoxville’s homeless program coordinator Michael Dunthorn raised concerns about its unintended consequences—for example, potentially allowing people to urinate in Market Square at will.

In the letter, Dunthorn pointed out that existing laws ban discrimination and protect personal property and privacy, and said the bill as written would “make the simple act of cleaning up trash an unmanageable liability.”

“The City does not support the central point of your proposed ‘Homeless Bill of Rights’ – the right to sleep and camp in public parks and spaces,” Rogero writes in her response to the collective. This would be unsafe both in terms of hygiene and crime, writes city spokeswoman Kathleen Gibi in an email.

The collective’s demand letter called for the city to help it “workshop” the Bill of Rights. Dunthorn and Rogero both left the door open to working with the collective on other ways to improve city policies and provide options for those that have been banned from the Knoxville Area Rescue Mission for criminal records and other behavior issues.

At Monday’s meeting of the Mayor’s Roundtable on Homelessness, a KARM representative announced that the agency has reviewed its policies and reduced its “banned” list by half, and KPD shared its effort develop a program to help homeless people from out of town reunite with their families if they wish, Rogero reports in her letter

In response to an open records request, the city provided a list of 70 apparent homeless camps “cleaned” in 2016, and details of cleanups in August and September. (Download map here.) During that time, the largest number of people were displaced from a camp near Cooper Street below Interstate 40, where 19 people were removed (11 in August, and eight in September, potentially some of the same people both times), followed by a camp at Blackstock Avenue and McGhee North, where nine people were removed in August. City officials noted that some of the camps are cleaned almost weekly, so there may have been only two or three people at these sites during a particular cleanup.

Homeless collective member Peggy Sue Morrow says the city, police, and railroad officials have “started a war” with Knoxville’s homeless in the past year, more aggressively destroying camps and throwing out people’s few possessions without giving them a chance to remove them.

“They even took my kittens. … Just because we’re homeless, we’re not worthless,” she says with tears in her eyes.

The Knoxville Police Department has a 13-step written procedure for removing people and items from a homeless camp that includes contacting the Knoxville-Knox County Community Action Committee and giving it at least two weeks to attempt to help camp occupants find housing.

Once CAC indicates it is done, police visit the camp, accompanied by additional officials like a city service department representative (for removing items) or fire department officials (to evaluate health hazards or unstable structures). During this visit, police are supposed to provide a written notification that they will be arresting whoever is there and removing their possessions in 72 hours; at the same time, police are to provide a list of resources to help with food, shelter, or medical needs. (If no one is at the camp, they leave flyers behind.)

Sometimes the homeless do not receive this much notice if the owner of the property where they are camping asks for immediate removal, or if there are criminal or safety concerns. Rogero invited the collective to provide feedback on this policy.

Morrow, who says she was homeless for years until she was able to get an apartment in Isabella Towers very recently, disputes that police are following the procedure. She rallied supporters at last Wednesday’s march: “We’re citizens of this country. What happened to our rights?” The crowd paused shortly after starting when Morrow fell to the ground in a small seizure, a legacy of being bludgeoned in the back of the head while living on the street. After some water and a brief rest, she popped back up and continued marching, elbows pumping.

Chris Irwin, a public defender who represents many homeless clients in court, took the day off from work to join the march in a suit and tie. He says the homeless often get used by savvy petty criminals, who offer homeless people jobs only to ask them to cash checks or pawn items using their legal ID. The scam artist makes off with the money, and the homeless person ends up in jail.

The protesters seemed to include more homeless supporters than homeless people, with many expressing outrage at the city’s perceived emphasis on downtown economic development rather than helping the economically disadvantaged who live on downtown streets.

“Redevelopment is just going to increase the criminalization of the homeless. We’ve already seen that,” says Knoxville resident Karly Safar. “People talk about how progressive the mayor is. What has she done? She should order the police to stop ticketing these people, especially if their ‘crimes’ don’t hurt others.”

The collective’s letter to Rogero accused a specific KPD officer, Steven Frazier, of following and threatening a collective member who is now afraid to go to work. On its Facebook page, the collective states that when members met with Rogero, she “refused to address the maltreatment we receive by KPD!”

KPD officials did not respond to a request for a response by press time.

Frazier’s personnel file included no complaints or discipline in the past decade. (He was investigated for harassment in 2004, but the department determined the accusation was unfounded.) Frazier, who has been with KPD since 1997 and with several Florida sheriff’s offices before that, has been assigned to the Central Business Improvement District for about 10 years and often patrols by bike. His evaluations indicate he has been part of the department’s efforts to curb aggressive panhandling, clean up homeless camps, and curb drug problems at the Volunteer Ministry Center. His self-initiated work has included early morning “sweeps of crack hangouts under bridges that serve as camp sites and bases for operations for criminal activity” like car burglary.

“I have personally spoken with KPD officers who work this beat,” Rogero writes. “I find them to be realistic and compassionate as they balance a concern for the people they serve with public policy and private property rights.”

But she emphasized that the city takes harassment claims seriously and invited anyone with a complaint about an officer to share it with the police department or the citizen-led Police Advisory Review Committee.

“The complicated issues surrounding individual experiences of homelessness do not lend themselves to easy one-size-fits-all answers, but we are making serious, good-faith efforts to address them, with significant investment of time, money and effort,” Rogero concludes in her response.