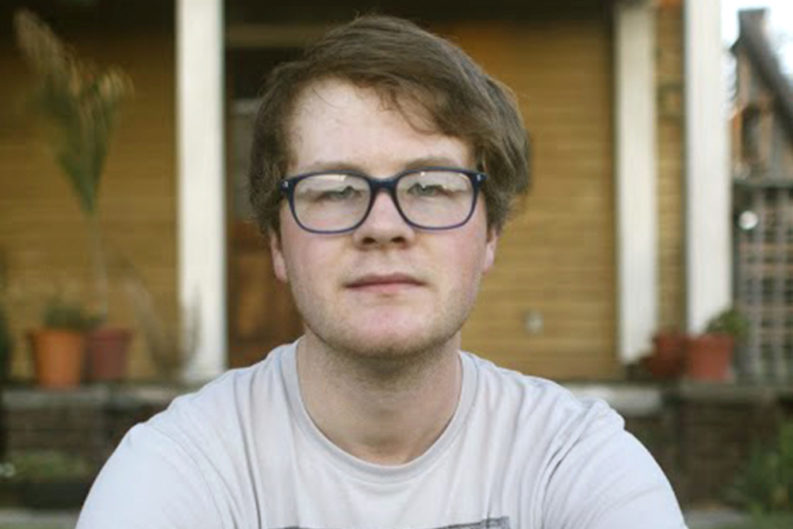 Ben T.O. Smith was sitting in his small apartment in Utrecht, in the Netherlands, on a study abroad trip in 2013 when he came up with the idea for Gezellig Records.

Gezellig, derived from the Dutch word “gezelligheid,” has no direct English translation; it suggests a feeling of belonging and togetherness. That’s the sense that Smith wants to bring to the independent music label he launched in July.

Smith, a University of Tennessee journalism grad who currently works at AC Entertainment, has put together a roster of six artists with a wide range of backgrounds and sounds. The lineup includes local artists like DJ Hatred and the electronic pop duo Peak Physique, featuring Matt Honkonen and Wil Wright, alongside the bitter noise rockers No Men, from Chicago, and Le Almeida, a psychedelic space-rock band from Rio de Janeiro. Smith says he found this selection of artists through personal connections, recommendations, and online research.

“It’s not a Knoxville-centric label, despite having two or three artists that are from Knoxville,” Smith says. “I want it to be as worldly as possible.”

While he’s had help with marketing, building the label’s website, and some media research, Gezellig Records is basically a one-man show. Smith says his experience—working at AC Entertainment, cohosting the Indie Aisle show on WUTK, and working at the now-defunct Disc Exchange—has given him a thorough introduction to the music industry. (It doesn’t hurt that Smith’s dad was a tour manager for Metallica for 16 years.)

“Just being around music and the people who help make music happen—that’s the thing that really got me,” Smith says.

The recent closure of the Disc Exchange was part of the reason Smith decided to finally pursue his idea for Gezellig Records three years after its original conception.

“For a while I’ve been thinking, ‘Man, I kind of want to work for a record label,’” Smith says. “So I just started one.”

Wright, of Peak Physique, says Smith has been a valuable asset to the Knoxville music scene and generally regards him as a “barometer for cool things.” For Wright, letting Smith put out his music was a “no-brainer.”

“I see the label as sort of an extension and functionality of his radio show,” Wright says. “Ben has always been the person introducing everyone to amazing artists that they certainly would’ve never heard of before.”

Wright, who previously worked at a large booking agency, says smaller labels like Gezellig can act as a “guiding force” for bands trying to get organized, plan tours, and start putting out their music. While artists at larger labels can be forced to scramble for attention, labels like Gezellig can focus more attention on a smaller roster of artists.

“A label that has your back and that doesn’t have a lot of backs to worry about can have everybody’s back a little bit more,” Wright says.

The label is “essentially a side project” Smith works on when he gets out of his day job, he says. One of his biggest challenges is getting people to listen to the music he puts out.

“If people are listening, that’s the best thing,” Smith says. “Otherwise, like logistically, operations-wise, it’s nothing I haven’t done in any of my other jobs. It’s more exciting because I get to learn it all over again.”

Smith acknowledges that Gezellig is “not a moneymaker by any means.” He has set up a subscription series aptly named the Cozy Club to help fund the label: For a payment of $150, subscribers will receive the first 10 releases from the label, free downloads of digital releases, and other perks. Upcoming releases from Gezellig include new music from DJ Hatred, a CD issue of Le Almeida’s album Mantra Happening (which has only been available as a download), and a full-length album from Peak Physique.

In the long term, Smith hopes Gezellig will become a multimedia label, curating books, art, and film. Smith also hopes his label will encourage others to take on similar projects to support the work of local artists.

“I want to see more of this stuff pop up in Knoxville, because I don’t think it’s difficult—it’s just time-consuming and it does take a lot of work,” Smith says. “I think if more of this sort of label stuff pops up, it will boost the local music scene and the recording scene.”

As artists are able to more easily self-record and release their music online, Smith says small labels like his are technically unnecessary. But he feels there’s still value in curating the work of little-known artists from diverse backgrounds.

“I want people to be able to see the Gezellig logo and be able to say, ‘I trust that label will put out quality music. I don’t know this, but I know it will be good,’” Smith says.