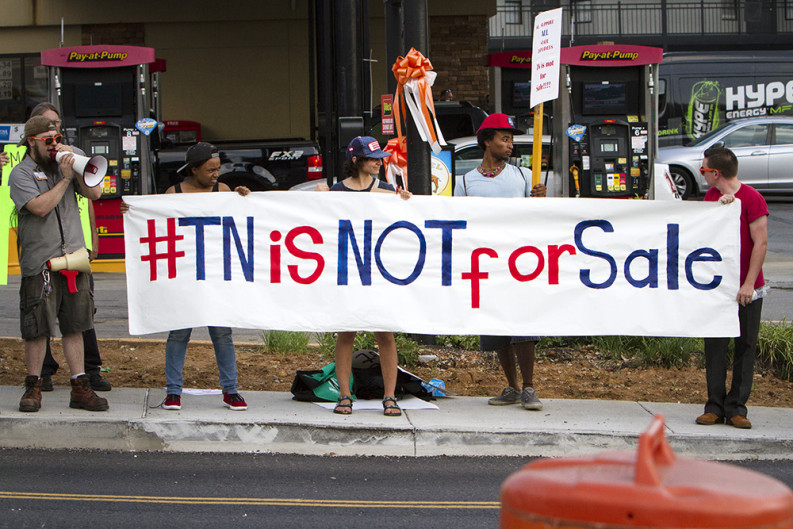 The uncertain future of the privatization plan, which state officials say could lead to $36 million in annual savings, is dissuading potential hires and affecting retention. There are 79 vacancies in the university department that handles landscaping and other maintenance.

“The effect that the ongoing outsourcing threat has had on hiring is that it calls into question main recruiting points—stability and benefits,” says Tom Anderson, a UT representative of United Campus Workers.

“In the larger context of outsourcing, that’s one interesting data point,” Lyons says of the staffing crunch. And it could allow outsourcing advocates to argue that the university’s current system isn’t working.

There are currently 79 openings in facilities services, UT spokeswoman Amy Blakely says in an email. “This is approximately double what we were running a couple of years ago.  We do believe the privatization discussions have hampered our ability to recruit and retain in several areas.”

Lyons says that more than 95 percent of responses during the public comment period were opposed to the plan.

Results of the privatization study underway by Nashville-based auditing firm KraftCPAs will not become public until November, according to the office of Strategies for Efficiency in Real Estate Management, which is attached to the state finance department. The outsourcing study, closed at this point to public scrutiny, involves custodial, grounds and repairs, and maintenance services. The state spends $550 million a year on facilities maintenance, including utilities.

SERM spokeswoman Michelle Martin says under any plan there would be “100 percent job protection” and comparable benefits if employees wanted to continue working, providing they pass background checks and drug tests.

She says that companies qualified to manage the 7,500 state buildings, totaling 94 million square feet, can save money by cross-training staff and eliminating contractors. Martin says the projected savings of $36 million was based on the $13 million the state has saved over two years after turning over management of some state office buildings and other assets to the private sector.

“By leveraging these kinds of investments we save a lot of money,” Martin says.

Anderson says the math doesn’t add up. He describes UT staff as “a work force that works for the community” in return for stability and good benefits, which include free courses and family tuition discounts. Those perks would likely disappear under private management, and hiring controls would be lost, he says.

“They can make as many claims as they want, but the fine print hasn’t been written yet,” Anderson says.

During his State of the University presentation on Monday, outgoing Chancellor Jimmy Cheek said 50 percent of UT employees donate to the university.

Anderson says prior efforts to privatize some services yielded results “bad enough that the university thought it best in the long-term to bring everything back in-house.”

File Photo: In September 2015, University of Tennessee staff and supporters took to the streets in Knoxville to protest Gov. Haslam’s plans to outsource state jobs. Photo by Clay Duda.