Hiking the Smoke Ring Trail Around the GSMNP - The Knoxville Mercury 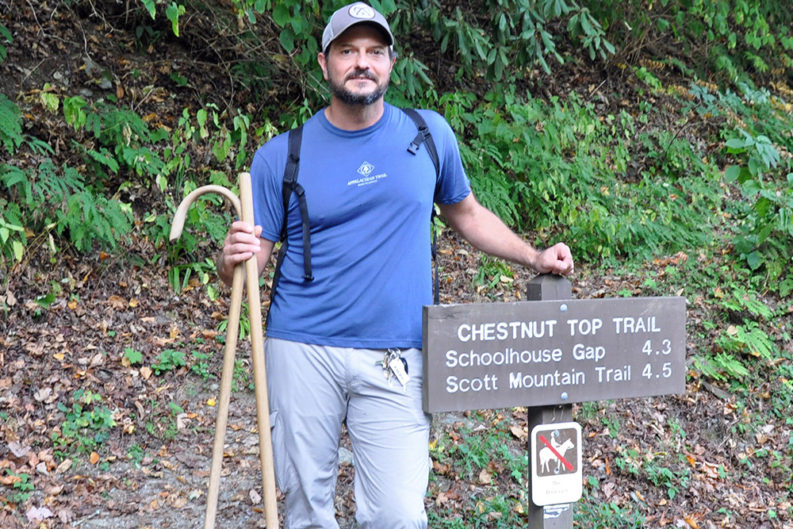 “It won’t rain on me,” said Travis “Shepherd” Hall, the long-distance hiker who was descending the Smokies’ Chestnut Top Trail with me last Friday afternoon.

Hall, who hiked the Appalachian Trail in 2000 (north to south), has made this same claim to fellow hikers who were worried about the weather. When he left a shelter, he says, they would watch in amazement as the rain stopped. Just now, as I followed Hall closely, I heard drops but did not feel them. Maybe he was onto something.

The Smoke Ring Trail (SRT) is Hall’s brainchild, an idea he began to develop seven years ago, to map a route that goes around the perimeter of the Great Smoky Mountain National Park. Hall, a hair stylist in high demand who works out of Hairpeace in Knoxville, didn’t get a chance to do the 260-mile long trek until last April.

He started on Chestnut Top on April 2, and on April 23 he descended Roundtop Trail and waded across the Little River, his finish line, to complete the circle.

The SRT uses parts of 51 official park trails and a couple of stretches of roads. Hall recommends the park’s $1 trail map for hikers to make sure they turn the right way at trail junctures.

Many people want to hike the AT but can’t get away for six months, he says. The SRT gives you the same biodiversity, scenery, and immersive trail magic as the AT (minus moose and martens) but you can do it in three weeks, and there are multiple access points where you can see loved ones or go into town or quit, if you have to.

Hall calls it the “mini AT.”

Towns such as Fontana Village, Bryson City, Cherokee, and Gatlinburg are in close proximity to Hall’s route, and there are many other access points near campgrounds such as Abrams Creek in Blount County and Deep Creek near Bryson City. Even though the trail skirts the borders of the park, Hall maintains that the SRT counters the misconception that the GSMNP as a whole is crowded. On his hike in April he saw only one other camper in the backcountry tent sites.

At the same time, because of the access points, he was able to see his daughter, Bronwen, four times in the three-week trek.

When I ask Hall, 48, about unusual or odd things he’d seen on the SRT, the AT, or any of the 900 miles he’d hiked in the Smokies, he says that every day on the trail is “strange and wonderful.”

“A lot of young guys think trail magic is a beer by the road,” he says.

For him, it’s about “being present in the moment and following your heart…. You don’t have a watch and you’re not on a schedule, whenever you encounter something, there’s a strange sense of ‘meant to be’ about what happens.”

Being in the moment, he says, is “focusing about where your next step will be, but not thinking about it….you think you’ve been hiking two hours, but it’s been 15.”

On the AT, he learned from well-known hikers such as the Nimblewill Nomad, a 60-plus-year-old sage with long white beard and hair, who did 30-mile days. “I felt like he slowed his pace so I could stay with him,” he says.

He also met the barefoot thru-hikers, Lucy and Susan Letcher, sisters from Maine who wrote The Barefoot Sisters Southbound. They let him feel their feet.

On our short hike, he was truly making long-distance hiking sound transcendent and spiritual, the best kind of adventure on which to embark. At our resting point at the top of the ridge, he put his arms around a chestnut oak that he called “Ninnie’s tree.” When his grandmother died, he hiked up here, he says, “to think.” On that day he leaned up against this tree and had a good cry, and he felt his grandmother’s comforting presence. Instead of visiting her grave, he comes up to the chestnut oak that he named for her.

When Hall first got out of his car at the Wye parking lot near the trailhead, I wasn’t so sure about him. Instead of the trekking poles that hard-core hikers always seem to have, he had two old wooden sticks. One of them looked like a shepherd’s staff and the other like a broomstick.

And that’s exactly what they were. A gift from someone’s garage 25 years ago, the shepherd’s crook, as he calls it, earned him his trail name: Shepherd. He was relieved that some wisecracker didn’t name him Little Bo Peep. On the AT he bought the broomstick in Pennsylvania to “match” the staff. 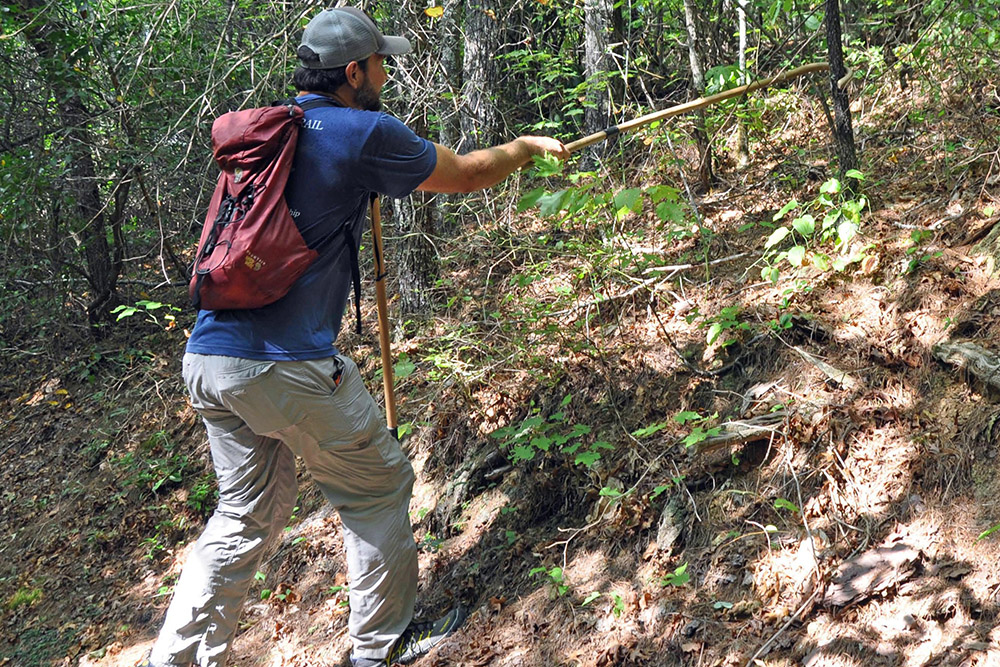 These two low-tech sticks assist him in various ways. Hooking the crook of the staff around a tree, he demonstrated how he could use it to pull himself up a steep incline. He says the staff could be used as a weapon. He showed me how the different lengths of the sticks could be easily adjusted to slanting terrain.

Sitting on a log near Ninnie’s tree, we had climbed about 1,200 feet. Stung by a bee on my Achilles tendon, my shirt and pants saturated with sweat, I hadn’t quite caught onto the trail magic, but I knew it would take time, definitely more than two miles.

Travis said just a bit farther on, on the left, a gathering of pink lady slippers bloomed in the spring. He described watching the emergence of spring on his Smoke Ring hike in April, how ascent and descent revealed wonders such as a tunnel of blooming laurels (not far from where we were) or a colorful splatter of bluets or trillium or Dutchmen’s britches, “a different world three times a day.”

On the loop, hikers will travel through along the Boogerman Trail, a segment of the Smokies with rare old-growth forest. They are likely to see Elk in the Little Cataloochee or Oconoluftee areas. Hikers with expansive budgets could stay at luxury resorts like Blackberry Farm or The Swag, which border the SRT.

What stops people from long-distance hiking, Travis says, is fear of the unknown, of being out in the woods overnight. He’s felt it, too, that fear that every sound you hear in the night woods is a bear or a person.

But after a couple of weeks on the AT, he says, he’d get a ride into town and become frightened about the car’s velocity. He’d feel the stress in the traffic around him.

“After a while, you realized that being up here is a lot safer than, say, Alcoa Highway,” he says.

Hall, who has a Facebook page for the trail, would love to make a map of the Smoke Ring Trail and to have some patches made similar to the ones hikers get for thru-hiking the AT.

His “ultimate dream,” he says, would be for the “National Park Service to recognize the trail and that a thru-hiker fee (limited number of passes per season) might go toward helping to maintain the park’s backcountry trails.”

The Travel Channel did a “roam” blog on Hall that contained an interview, but he’s not so much interested in recognition. He wants people to enjoy the Smokies in a new way, going clockwise or counterclockwise around the perimeter of the park on backcountry trails that are uncrowded and full of trail magic.