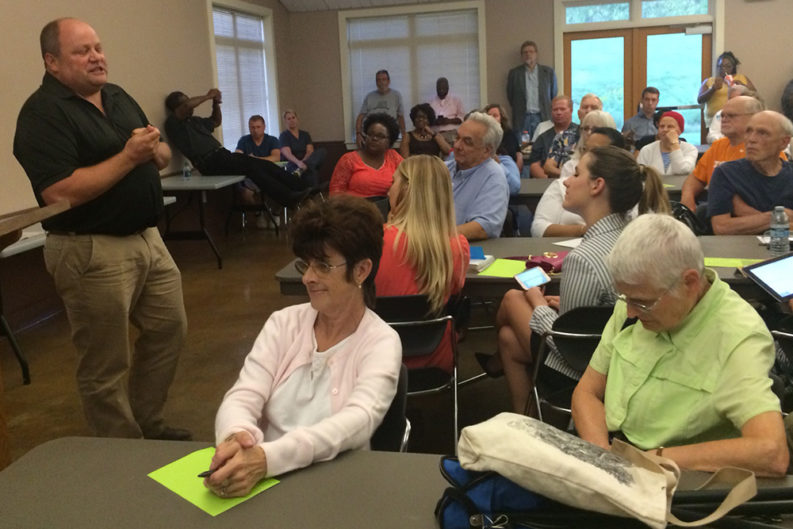 A developer largely sidestepped questions about his checkered business history Monday evening before a large and boosterish crowd eager to hear about plans for Knoxville Center, the struggling East Knoxville mall recently acquired by one of his many companies.

Legal issues have dogged Brant Enderle and many properties he has ties to, delaying the redevelopment of valuable downtown storefronts and leading to multiple liens and multimillion dollar lawsuits against him and the limited liability companies tied to his investments.

Two lawsuits focused on downtown buildings allege wrongdoing or malicious intent by Enderle, a local developer with ties to a slew of limited liability corporations that own many key downtown properties in Knoxville and Chattanooga.

Those disputes center on fouled business deals between potential tenants in the high-profile Kress and Conley buildings on Gay Street, where redevelopment projects had stalled. BAJM Holdings, one of the LLCs named in the lawsuit involving the Kress building, is also being sued by the Morristown City Council; the council wants to take control of the old Morristown College campus, which BAJM owns, through eminent domain. MCD, another LLC named in that suit, has the same mailing address as Henry & Wallace, a company formerly known as Enderle Holdings, LLC.

After purchasing Morristown College in 2014, Enderle told reporters he had a long-range hope for redeveloping the property, with the idea of making it a commercial and residential hub—similar to the vision he pitched for Knoxville Center on Monday. In its lawsuit, the Morristown City Council is seeking to take control of the property “for the safety of its citizens,” arguing that the buildings—many of which are deteriorating and covered in asbestos—have been vacant since the deal.

In August, Knoxville Partners, an LLC owned by Enderle, paid about $12.5 million for Knoxville Center, a 32-year-old mall off Interstate 640 plagued by vacancies and a decreasing number of shoppers. Enderle told the crowd Monday that his partners include a Minnesota developer and other “investors hoping to make a good return.”

Most questions from the overflow crowd of about 200 people at New Harvest Park were earnest inquiries seeking information about a potential economic revival for the long-beleaguered East Knoxville community. The forum was hosted by the Alice Bell/Spring Hill Neighborhood Association, and attendees included several elected officials.

“Why should we trust you?” one man asked.

Enderle’s reply was brief: “I just signed for $12 million to buy it.”

Enderle acknowledged being the subject of “a few lawsuits”—that’s to be expected for a businessman involved in multimillion dollar deals, he said. “Just because someone asserts something in the newspaper and then puts folks up talking about it, don’t make it so,” Enderle said.

Many in the diverse, murmuring crowd—most of whom seemed intrigued by the potential for good economic news for their community—laughed and applauded at the response.

Enderle seemed surprised by the turnout at the community forum, as did organizers. He says his investment will take a while to come to fruition, but he was open to multiple ideas to bring the mall back to life and make it a center of the community, including car shows and band performances. He says initial work is planned on security systems, parking lot improvements, and infrastructure fixes, such as the repair of escalators.

Enderle emphasized again and again the “very long-time horizon” of bringing back the moribund mall. He says he was hesitant to hold many meetings like this one. “It creates great big expectations,” he says.

Based on the crowd at New Harvest Park, the community indeed appears to have just such expectations.