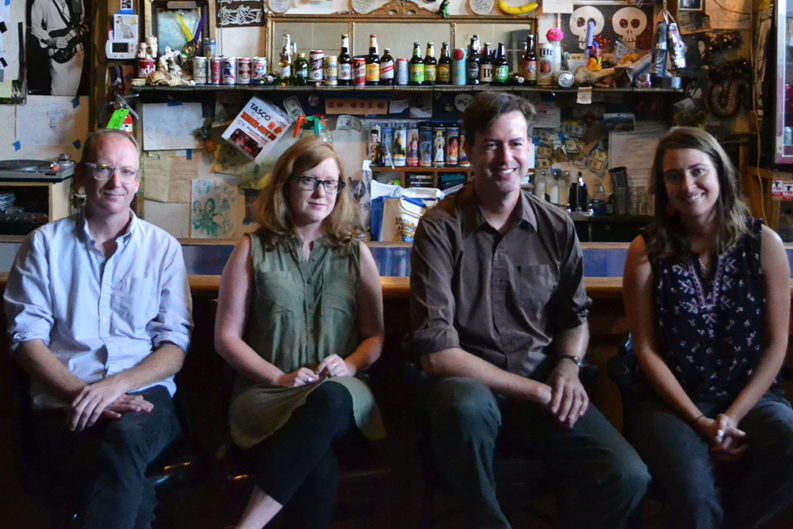 The small independent-music venue Pilot Light, operating for 16 years in the red as a “for-loss community center” (as it is sometimes affectionately called by regulars), recently incorporated as an official nonprofit with hopes for tax-exempt status as a 501(c)(3) organization by the end of this year.

Since its inception in 2000, Pilot Light has been a nexus of creative activity in the alternative arts scene, but also a volunteer-run, no-profit business, with owner Jason Boardman sinking much of his own money—earned from his day job at McKay’s—into keeping the venue afloat.

“Year after year it seems more of an overwhelming task to bear on my own,” says Boardman, who recently turned 43, “I feel like I will be doing the place a disservice if I don’t respond to that by getting more organized and more help.”

With the help of an accountant and a lawyer friend, Pilot Light, Incorporated is now formalized as “for charitable, literary, and educational purposes only, and not for the private gain of any person or entity.”

“I was at Pilot Light the day they opened, and have attended shows there regularly,” says Dawson, archivist at the Tennessee Archive of Moving Image and Sound, and the Mercury’s Inside the Vault columnist. “It’s been a crucial venue in the city for up-and-coming national and international acts that go on to play much larger venues. Perhaps its most important role, however, is as an incubator and support system for local talent. It’s a favored spot to play for everyone from local evergreen artists like RB Morris to the seemingly limitless supply of young bands just starting out. It has also been a space for artists, comedians, plays, films and other artistic endeavors that might otherwise not have an outlet.”

Boardman hopes establishing Pilot Light as a nonprofit will strengthen the viability of the venue by fostering better organization and efficiency, finding new sources of financial support, networking with other nonprofits, and setting up a structure that can stand independent of its founder.

“[Pilot Light] has always felt like an investment and not a loss of any kind to me. If it could exist into the future, whether I’m involved or not, that would personally be very satisfying,” Boardman says.

Imminent plans include improved advertisement and communication, with an updated website, more outreach to the press, and faster email responses. Otherwise, the aesthetic and vision of Pilot Light should remain constant; Boardman will continue to book a diverse array of performers with a focus on unique or experimental acts unlikely to be featured by other venues in town.

“The touring artists we are booking—championing—are largely as yet unknown,” Boardman says. “Some of the local artists are in their earliest—sometimes most interesting—phases of development, and some of the more experimental bands will simply never draw a very large crowd, especially outside of large cities. Shows at this level have to have a low ticket price so as not to deter people taking a chance on something new. But in the lower end of this spectrum of ‘financial viability’ are some of the most remarkable artists you will ever see. Some will only ever exist in spaces this size. Artists like these were the reason we started the place, and in doing so we knew we would never make any money.”

Albeit on a smaller, more humble scale, Pilot Light has more in common with a performance venue like the Bijou Theater, also a 501(c)(3) supported through donations and fundraisers, than with a nightclub or a restaurant with a stage. Pilot Light has a cash-only bar selling beer, but no food or liquor. The interior is absent jukeboxes, TVs, pool tables, or other features that would distract from the music.

“When I was a student at UT I was taken to a show [at Pilot Light] by some friends,” says Albertson, senior planner at the Knoxville-Knox County Metropolitan Planning Commission. “It was such a different and wonderful scene from the bars on ‘the Strip.’ It felt intimate, like I was part of something hidden and magical. I saw amazing musicians in the early years—folks that went on to become quite famous like Cat Power and Deerhoof. I felt like I had my mind opened musically.

“When I moved away for graduate school I sought out places like Pilot Light and could never find anywhere that had as well-curated of a music scene. When I was contemplating jobs in other cities the idea of having access to a great music scene again at Pilot Light helped tip the decision to come back to Knoxville. [As a board member] I want to give back to a place that has given me so much over the years. This tiny, crusty rock ’n’ roll venue is a pillar in this town and I want to help safeguard it for future young Knoxvillians.”

Earlier this year, a local developer with increasing real-estate holdings in the Old City attempted to buy Pilot Light’s building, a small, nondescript brick storefront on Jackson Avenue. The owners refused to sell. “The importance of [the building owners’] support and belief in us cannot be overstated,” Boardman says.

Raised rent and other economic factors have forced out small owner-operated businesses in recent years, as an influx of more “upscale” businesses are transforming the Old City from a hub of eccentric, counterculture establishments to a more mainstream entertainment district. The nonprofit status alone can’t hold aggressive developers at bay, but it helps builds a case for the Pilot Light as an artistic entity worth preserving.

“The city’s cultural landscape is far more interesting and richer because those who perform at, work for, and patronize Pilot Light are here,” Dawson says. “The bathroom walls [of Pilot Light] alone are scatological works of art worth preserving, displaying gossip and celebrations of hedonism not unlike the kind Catullus scribbled on the walls of ancient Rome. I like that they exist just across the street from a steakhouse with a $115 steak on the menu and valet parking. A healthy, well-balanced city can surely sustain both.”