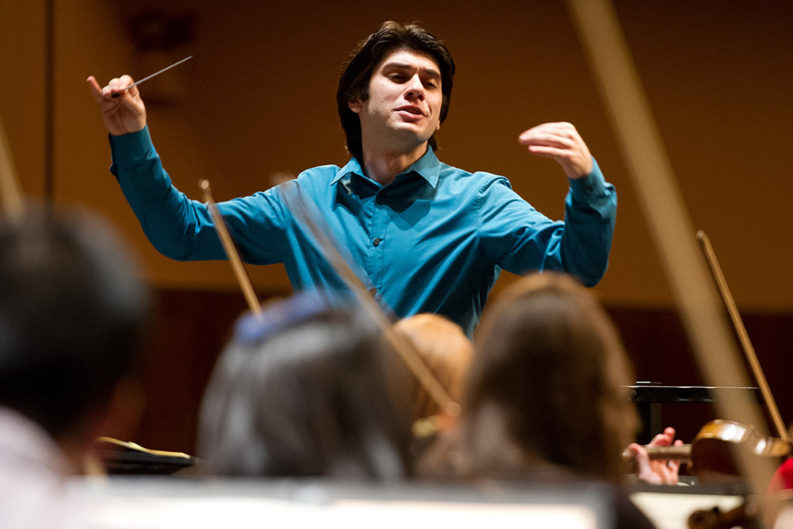 We humans are a mess of contradictions. While we seem to be irresistibly attracted to change and things that are new, we also hold on tenaciously to the comfortable objects and traditions of the past. As art imitates life, we find ourselves exhilarated by the prospect and potential of new works, new artists, and new experiences, yet we invariably fall back on the comfort and satisfaction we receive from favorite musicians and time-honored masterpieces.

This conflict between past, present, and future will ultimately be a theme in Knoxville’s classical music scene this fall as audiences and musicians confront a changing musical landscape. Leading these changes is the Knoxville Symphony Orchestra which opens its 2016-17 season on Thursday and Friday of this week under its new music director and conductor, Aram Demirjian. This season of introduction in which Demirjian will conduct five of the eight monthly Masterworks concert pairs and only one of the Chamber Classics concerts, is further complicated by the impending departure of Concertmaster Gabriel Lefkowitz, who will be dividing his time this season between the KSO and his new employer, the Louisville Orchestra.

Lefkowitz’s six-year tenure as concertmaster has seen the KSO grow by leaps and bounds in terms of ensemble excellence and professionalism. Lefkowitz also gets credit for creating, programming, and performing the popular Concertmaster Series of chamber music, which will appear once again at KMA on Sept. 28 and 29, offering up Schubert’s “Trout” Quintet. With the audition process for the concertmaster position beginning later this season, filling his shoes with someone of equal artistic stature, exuberance, and charisma, will not be an enviable task for the KSO.

For the opening KSO Masterworks concerts this week, Demirjian and the orchestra turn to a Russian theme with Tchaikovsky’s Symphony No. 5 and Rachmaninoff’s Piano Concerto No. 3 with pianist Orion Weiss. In the absence of Demirjian, KSO resident conductor James Fellenbaum will be leading a number of events on the schedule, including the October Masterworks pair featuring Vivaldi’s Four Seasons and a quasi-companion concert in the Chamber Classics Series titled The Four Seasons of Buenos Aires featuring works by Marquez, Romero, Copland, and Piazzolla.

Demirjian will return in November for a Masterworks concert featuring American composers and for A Classical Christmas at the Bijou, a program that proved immensely popular last year as a counterpoint to the annual pops-heavy Clayton Holiday Concert in December.

In addition to his position with the KSO, Fellenbaum is also Director of Orchestras for the University of Tennessee School of Music. In a new angle, his UT Symphony Orchestra will take music from Tchaikovsky’s notable ballets as a theme for its fall schedule. This Sunday’s 4 p.m. concert at Cox Auditorium will feature music from Swan Lake along with works by Shostakovich and Borodin. October’s concert will offer a suite from Sleeping Beauty, while November will have the orchestra working with the Oak Ridge Civic Ballet Association on a production of The Nutcracker.

Opera is now a “thing” in Knoxville, thanks in large part to Knoxville Opera and its attention-getting Rossini Festival. With its fall slot often devoted to lighter fare, KO will perform the Gilbert and Sullivan operetta, The Pirates of Penzance, at the Tennessee Theatre on Oct. 21 and 23. However, those interested in older and rarely performed, but newly resurrected works should check out the UT Opera Theatre production of Monteverdi’s 1640 work, Il Ritorno d’Ulisse in Patria (The Return of Ulysses) at the Carousel Theatre on Nov. 10, 11, and 13.

On Oct. 12 and 13 at the Emporium, Knoxville’s chamber opera company, Marble City Opera, takes on the somewhat new with two one-act operas: Gallantry by Douglas Moore and La Divina by Thomas Pasatieri. Gallantry (1958) is a parody of TV soap operas, while La Divina (1966) is about the farewell performance of an aging diva.

“Old and new again” is also an ongoing theme for the UT School of Music and their guest artist, faculty, ensemble, and student performances. This fall alone, the school is offering well over 50 events that are open to the public and that are Knoxville’s best enlightenment value—most are free. [Check out music.utk.edu/events] Those who have been discouraged in the past from attending UT music events by campus parking issues, take note: A new garage has just opened across Volunteer Boulevard from the Natalie Haslam Music Center.