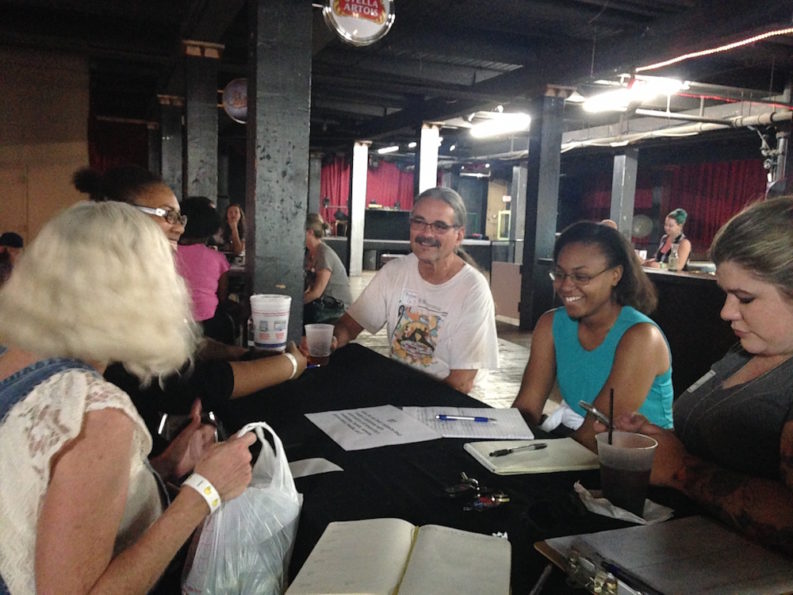 About 30 musicians and music promoters gathered around tables at the Concourse at the International on Monday night to talk about the state of local music in Knoxville.

The event, organized by Garrett Thomson, program manager at Dogwood Arts, and Chyna Brackeen, owner of Attack Monkey Productions, was the second gathering of the Knox Music Coalition. It’s a new effort to bring together musicians, promoters, venue representatives, and radio hosts to discuss the local music scene and come up with actionable solutions to common problems.

“Over the last year I feel like we’ve seen so much happen with the scene,” Thomson says. “I’m seeing more shows being booked, more bands starting to perform. And so it’s just important for local creatives to organize so they’re compensated fairly and they’re represented fairly in the city.”

The group split into teams and they were given 10 minutes to discuss five specific questions regarding the music scene, like how to get Knoxville better acquainted with local music and the best way to organize monthly music business workshops. Jazz singers, radio DJs, bass players, and more talked about what Knoxville is doing well—great venues, a diversity of genres, a generally supportive environment for artists—and brainstormed ways to improve it.

During the first meetup in July, the group came up with a long list of small but impactful problems that could be resolved, as well as “big dreams” that they want to see happen in the music scene long-term. Some of the major goals included improving the recording culture in Knoxville and creating a database of local musicians, vendors, promoters, and other information that could be utilized by the community. Another idea was to advocate for a designated loading zone for musicians near venues.

“It’s really difficult if you’re blocking an alley or you’re parking in a street space that you have to pay for the meter and you’re trying to haul your gear two blocks away to the nearest club,” Brackeen says, “When we could actually designate a space that’s right near that club to make it a little easier.”

Brackeen says it’s easy for local musicians to be overlooked by the city, and formally organizing often disparate bands and individual musicians is an important step to act collectively for common goals.

“I feel like there’s a lot of support from the city for the major cultural institutions—your symphonies and operas and things that are considered the ‘arts’ organizations—but we’ve not necessarily treated our music scene like it’s an important cultural asset,” Brackeen says. “And it is. When people come to visit Knoxville, they go to bars and theaters and they experience entertainment and they have a great time here because of what our local music scene has to offer.”

Nita Dunn, who hosts “Hillbilly Fever” on 89.9 WDVX and attended the event on Monday, says she thinks regular musician meet-ups can be beneficial for networking, especially for young musicians who are trying to establish a fanbase.

“With touring especially, you need to start out locally, and then maybe start with the day drives,” Dunn says. “But if there’s nothing to do here, how are they going to get to the point where they’re able to get out on the road and build a fanbase in bigger circles?”

The meetups, which Thomson and Brackeen hope to make monthly, are an effort to foster community among local musicians and prevent siloing. Thomson says the formation of the Knox Music Coalition came “incredibly organically.” The venues that hosted the first two events – the International and the Casual Pint – offered their spaces for the meetup and musicians spread the event through social media and word of mouth.

“I haven’t had to put much effort into this whatsoever, which is good because the idea from the very beginning was to just let musicians lead it,” Thomson says. “I want to facilitate and I want to get everyone in a room, but I don’t want to just spew out my own ideas and force my own agenda. I want the creators to actually be heard.”

For more information on the Knox Music Coalition, visit: knoxmusiccoalition.org