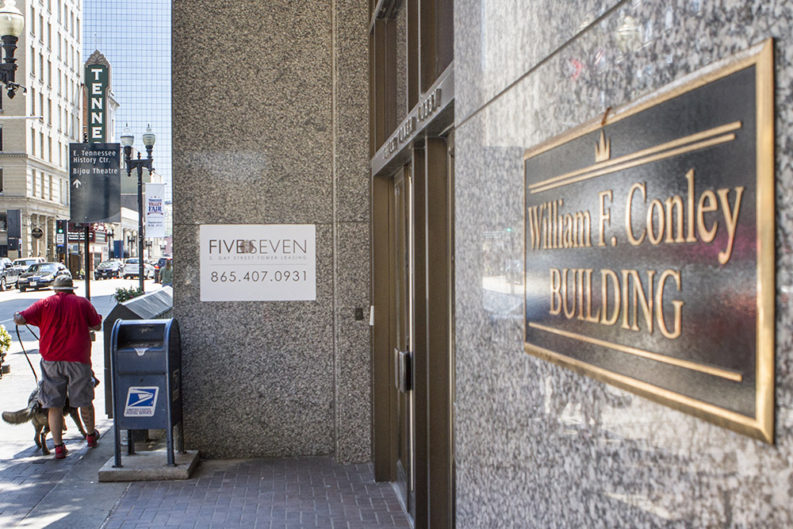 If all had gone as planned, Gay Street would now be home to a Carolina Ale House restaurant and brewery and a new Wild Wing Cafe. Instead, both of those prospective business expansions soured, ending in lawsuits totaling millions of dollars against a prominent Knoxville developer who has scooped up a number of high-profile properties in downtown Knoxville in recent years, many of which still sit fallow.

The lawsuits have one thing in common: both allege wrongdoing or malicious intent by Brant Enderle, a local developer with a long history of business discrepancies and ties to a slew of limited liability corporations (or LLCs) that, on paper, own many key downtown properties in Knoxville and Chattanooga. He is also a manager for Henry & Wallace—previously known as Enderle Holdings, LLC—a downtown development firm listing these properties among its projects. His wife, Amy, is the company’s registered agent, Secretary of State records show. LLCs are not required to divulge the identities of owners, though an amendment filed with the SOS in 2010 listed Amy Enderle as owner of Henry & Wallace.

These recent lawsuits aren’t isolated incidents. Court documents across multiple states trace Enderle’s questionable business practices back a decade, from allegations of gross mismanagement at a Louisiana golf course to unpaid debts and other legal wranglings here in Tennessee.

If it sounds complicated, it is. Yet court documents, property records, and media reports offer at least a glimpse into this tangled world of business maneuvers that allow such companies and operators to make sizable investments under different companies’ names, with limited oversight or accountability.

The repercussions of these business disputes could significantly shape downtown’s continued development, and in some cases have already contributed to prolonged vacant storefronts and still crumbling brick facades.

In response, Enderle’s attorney filed a counterclaim, suing Universal for $2.5 million for “the damages caused” by the initial lawsuit, denying many of Universal’s allegations, saying Enderle did not have an ownership stake in BAJM, and arguing Universal never had a legal contract with Carolina Ale House proprietor Moshakos Real Estate, LLC. (The copy of the contract included in the original lawsuit was only signed by a Universal representative.) The counterclaim alleges that, by filing a lawsuit, Universal had “intentionally placed a cloud on the title of the Building and the interest of the Defendants therein,” thus the defendants are entitled to compensation.

Universal at one time owned the entirety of the Conley Building, but sold all but the first floor and mezzanine levels to BAJM Holdings in 2014. (BAJM, in turn, divided up the building between other companies, including 507 South Gay, LLC and Gay Street Law, LLC—like we said, it gets complicated). Attorneys representing both Enderle and Universal declined to comment for this story, citing pending litigation. Henry and Wallace representative Rebecca Everheart said Enderle declined comment.

“He is sitting right across the table from me and does not want to comment about that,” Everheart said on the phone.

Just a few months earlier, in April, Enderle and his wife, Amy, faced a separate lawsuit from DNC Lakeside, a company looking to open a Wild Wing Cafe restaurant in the Kress Building on Gay Street. DNC provided $180,000 up front to cover construction costs, to be handled by Enderle’s Kress Partnership, LLC. But as the months ticked by, little to no work took place at the storefront, eventually leading DNC to file a lawsuit in an effort to recoup its money. (Work recently resumed at the Kress building with a “for lease” sign posted out front.)

“The Defendants have kept and enjoyed the benefit of the Plaintiff’s Construction Money, without using the funds for the performance of the Work as required by the Purchase Agreement,” the lawsuit alleges. “Moreover, despite the Plaintiff’s furnishing to Kress Partnership of the substantial Construction Money, Kress Partnership failed to pay contractors or to appropriately engage their services in order to perform the Work under the terms of the Purchase Agreement.”

Property records show some of DNC’s claims hold true. At least five contractors filed a total of 12 liens against the Kress and Century buildings since January of this year, alleging nonpayment for materials and work totaling more than $260,000. Most all of those debts were paid off in April or May, property records show. DNC settled its lawsuit out of court.

Even as companies with ties to Enderle have struggled to pay the bills, the group has continued to expand on its investments. Knoxville Partners, LLC recently purchased Knoxville Center Mall for about a third of its appraised value. It wasn’t initially clear who the buyers were, however, with a press release announcing the purchase saying it was being bought by “two companies with extensive portfolios in the real estate construction and redevelopment in commercial, residential and mixed-use markets.” It was later revealed that filings would go to an LLC owned by Brant Enderle, WBIR reports.

Over the past few years, businesses with ties to Enderle have amassed quite a lengthy list of urban properties, both in Knoxville and Chattanooga, plus a few outliers. He has an ownership hand in the Kress and Century buildings, the Conley building, Standard Knitting Mills and Abbey Fields, about a dozen small parcels near the South Waterfront, and other local holdings, now including the mall and also the old Morristown College campus. These properties are all owned by a variety of different LLCs, but are all listed as projects on the website of Henry and Wallace. Elsewhere, its portfolio includes several buildings in downtown Chattanooga, residential developments in Thompson Station and Sevierville, and stakes in two golf course: the Ridges at Village Creek in Arkansas and the Cabins at Carter Plantation in Springfield, La.

Legal filings related to Enderle’s management of the Carter Plantation golf course and resort development may offer the most insight into some past business practices. In 2010, Chicago-based debt managers Nuveen Investments, Inc., sued bond underwriter Crew and Associates Inc. for allegedly misrepresenting facts to get a loan for expanding the resort. While neither Enderle nor his companies were named in that suit, the premises for the lawsuit hinged on his alleged business practices as manager, which included allegations that he failed to pay lenders, misappropriated funds, and defaulted on several loans.

Enderle and another co-manager at Carter Plantation used some of the $15 million in bonds to cover operating expenses at the struggling golf course, according to the complaint, despite that money being earmarked for the development of a marina and hotel on the property. Enderle was also alleged to have submitted sham requests to the bond trustee, in one instance billing $190,000 to pay vendors, then putting that money in his own personal bank account, the suit alleged. The developers were also sued for $400,000 for an unpaid mortgage and more than $500,000 for past-due rent in separate lawsuits.

Enderle told Bloomberg at the time that the golf resort failed because of economic fallout after hurricanes Katrina and Rita hit the state in 2005. However, the lawsuit framed things differently: “Carter Plantation was already facing economic disaster due to the incompetence and dishonesty of CP Land and CP Golf, Enderle and [co-manager Jim] Adair long before the national economic decline caused further economic deterioration at Carter Plantation.”

In 2007 the Department of Treasury placed a $211,000 tax lien on the resort property. Enderle faced a $400,000 federal tax lien covering that same period, for unpaid taxes in 2006 and 2007. The Nuveen lawsuit was eventually settled out of court.