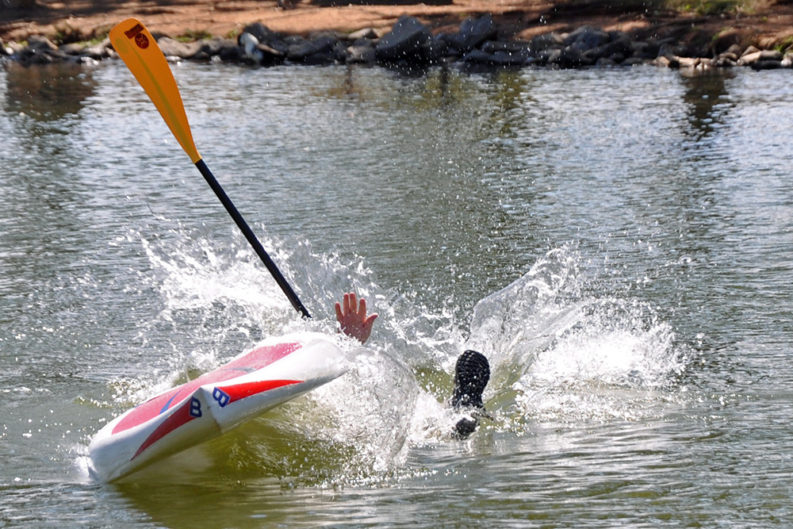 For a while now, I’ve watched people propelling what look like surfboards across our inland lakes. Recently, in a desperate act to extend the last days of summer, I decided stop watching and try out the sport of standup paddleboarding.

Too cheap to go out and buy a board, I sampled three rental spots in the Knoxville area: the Billy Lush Board Shop at Volunteer Landing, the Little River Trading Company at Louisville Point, and River Sports Outfitters at the Cove in Concord Park.

Larry Hill, a paddleboard racer at the Billy Lush Board Shop.

At Billy Lush’s, on a Sunday around 11 a.m., they had me on a board within minutes of my arrival, a Velcro leash around my ankle connecting me with a cord to the board. The young woman at the dock put my board in the water and handed me a life jacket and paddle. She suggested that I start out on my knees.

After a minute or so of knee paddling, I wobbled to a standing position and paddled upstream toward Dickinson Island.

I made it to the James White Parkway bridge in about an hour. I was never able to relax on the board, though I kept my knees flexed and tried really hard. Frequently, I lurched forward and backward, side to side, and I imagined that I looked like an aquatic Frankenstein from the riverside apartments upstream of Volunteer Landing.

After the very hot paddle, I had a cold beer at Billy Lush’s bar and talked to Larry Hill, a paddleboard racer whose son, Thomas, works at the shop.

Inflatable boards, he said, are great in terms of storage and good for paddling rivers since you can bounce them off rocks without damaging them. The rigid recreational boards (10 or 11 feet long), like the inflatables, tend to be wider and more stable (thus good for beginners) than the longer touring boards and the really long racing boards (14 feet or longer), which track better and have pointed bows which slice through the water.

At the low end at Billy Lush’s is the Adventure XI All Rounder, a 10-foot, 6-inch long, 26-pound board that costs $895. Rentals are $20 an hour and $11 for each additional hour. My rental was a Three Palms board, which is not for sale in the shop. 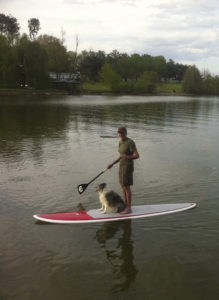 I figured my balance would improve at Louisville Point, and it needed to because by that Sunday afternoon, motor boat activity had begun to trouble the water. At first I felt more stable on the Riviera that the rental guy, Bryson Perkins, carried down to the boat ramp for me. And then I found myself in the water, with the board, leashless, scooting out ahead of me. I was far enough away from the ramp that nobody saw me. I clambered back on and paddled toward the shelter of Cox Creek.

Being on the board (versus a kayak) seemed more primitive and elemental. At a calm spot near a partially submerged fallen tree, I sat down on the board, and a school of striped bass surrounded me, dozens of them breaching the water like miniature dolphins.

At the Little River Trading Company shop, Tim Patterson was, like Larry Hill, a zealot. A paddleboarder for six years, he started out in his 50s when he began having a little trouble with his balance. Problem solved, he said.

LRTC has only one brand, the Riviera Voyager, and they are on sale. Patterson says he can travel 7 or 8 miles in an hour on his. He likes to fly fish for bass from his board, and he loves to take along his Australian shepherd.

The boards have gained popularity for many reasons, said Patterson, but their light weight is one of the foremost. At less than 30 pounds, the Riviera, a touring board at 12 feet 6 inches, is easier for one person to load onto a car and carry to the water than a kayak or canoe.

Labor Day was the final weekend of the season for Louisville Point rentals. 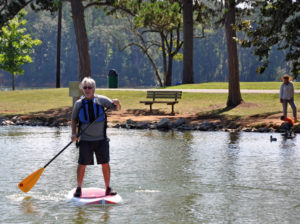 The author at the Cove in Concord Park. For the “after” photo, see above.

I got to the Cove rental shop, off Northshore Drive, just as it opened at 10 a.m., and there were five or six people in line (renting sit-on-top kayaks). It was, after all, the Saturday before Labor Day, which I thought would be the ultimate paddleboard challenge (for me), with all the boat traffic.

After launching, I teetered out to the Concord Yacht Club, a little less like Frankenstein but still unsteady in the chop raised by a 10-15 mile-an-hour headwind and motorboat traffic out in the channel. I was on an 11-foot board called “Bounce,” which would turn out to be an uncannily accurate brand name for me.

Beyond the yacht club, I passed a navigational marker with a scolding osprey atop it, and did an awkward dance across the sea-like swells of cabin cruisers. I did what Patterson suggested to steady myself in wakes: keep paddling to make yourself a tripod.

I passed under the Northshore bridge into Turkey Creek, thinking I was home free here, in calmer waters, but then a runabout passed under the bridge behind me. The skipper pulled back the throttle, but I could not stay on the board. The fishermen and drivers above must have had a great view of me flipping off the back of the board and losing my hat.

Seeking even calmer waters, I paddled farther up Turkey Creek under the Norfolk Southern railroad bridge. There, I planned on sitting down and taking a break with some cormorants and a great blue heron, perched on rocks in a windless pocket.

I thought I saw a public swimming pool with a chain link fence around it, but upon closer inspection, this turned out to be a wastewater treatment plant. I exited the area, the stakes for staying upright suddenly raised.

I made it back near the ramp without falling again, and I was feeling cocky. Then I saw a couple on boards doing yoga: no handstands, but downward dog and some other contorted poses that humbled me.

Ed McAlister, owner of River Sports Outfitters, explained the surge in paddleboard popularity with a concept that hadn’t occurred to me, in my awkward struggles. It was cool, he said, a natural progression of paddlesports from the more traditional kayak and canoe.

He also pointed out that it’s an easy sport to pick up on, that you don’t feel as confined as you might in a kayak.

River Sports has a variety of board brands, including the Bote, which maximizes the cool factor with colorful graphics on their decks. Prices range from $725 (Bic) on to $1,600 (Bote).

We talked briefly about the fact that both of us, of similar size, probably needed a board of at least 11 and a half feet. I wondered aloud if paddleboarding would help me drop a few pounds.

“It will,” McAlister assured me.