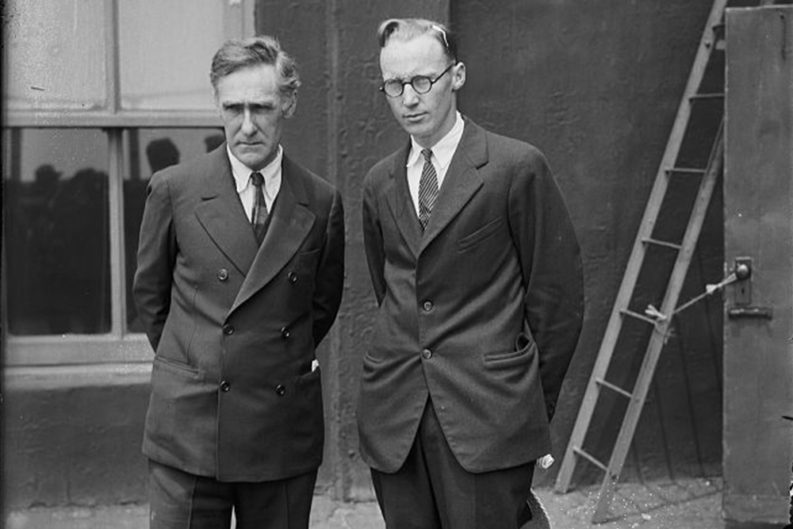 Rich in history and interpretive events, it’s a month for remembering

The first-ever James Agee Conference for Literature and Arts will be on Sept. 9-10 at Pellissippi State Community College’s Hardin Valley campus. Featuring dozens of presentations by published authors of fiction, nonfiction, and poetry, it’s aptly named for Knoxville-born author James Agee (1909-1955), a versatile talent who in his short life made a mark in all those fields. The conference is free; to register, see pstcc.edu/ageeconference.

On Sept. 14, in association with the ongoing exhibit, “Come to Make Records,” at the Museum of East Tennessee History, collector Julian Burke will give a noon lecture on the lively history of Knoxville’s first radio station, WNOX, whose live-radio shows launched the careers of dozens of musicians, and whose studios hosted the Knoxville Sessions recordings of 1929 and 1930.

Knoxville was once known as the Marble City because of the marble it produced for the monumental architecture of eastern cities, and drove a large part of the local economy. On Sept. 16, Knox Heritage’s monthly Lost and Found Lunch, at Westwood, 3425 Kingston Pike, will feature scholar Susan Knowles, speaking on the history of the marble industry in Knoxville, from the 1850s onward. The program’s at noon, with lunch served at 11:30 (free to the first 30 who make a reservation! Contact KH at info@knoxheritage.org.)

Sept. 17 is the 140th birthday of influential, idiosycratic lawyer and professor John R. Neal (1876-1959). Advocate for controversial causes, Neal was, among other things, one of the defense counsels for Dayton evolution teacher John Scopes. Back in Knoxville, Neal lived in rooms at the Watauga Hotel on Gay Street, part of which survives as the Regas Building, and founded his own law school, which lasted for decades.

On Sept. 17, UT’s McClung Museum opens its exhibit “Knoxville Unearthed: Archaeology in the Heart of the Valley.” Curated under the supervision of Charles Faulkner, Knoxville’s leading archaeologist, it will be an unusual opportunity to see artifacts from across Knoxville’s 225-year history in context. Faulkner and fellow archaeologist Tim Baumann will give a presentation about the exhibit at the museum on Sept. 20. For more,see mcclungmuseum.utk.edu.

Sept. 19 is the 126th birthday of Knoxville’s most influential librarian, Mary Utopia Rothrock. The library’s long-tenured director launched the branch system and helped establish the McClung Collection; she later edited The French Broad – Holston Country, the 1946 book that remains the most comprehensive history of Knox County. She became nationally famous when she established the Tennessee Valley Authority’s innovative system for distributing books to far-flung dam workers.

On Sept. 22, Laurel Theater hosts a tribute to offbeat jazz/blues multi-instrumentalist Howard Armstrong (1909-2003), who made a living on the streets of Knoxville in the 1920s and early ‘30s, and was a leader of the pioneering string-jazz group that recorded by the name Tennessee Chocolate Drops. The Armstrong Legacy Trio will perform in the intimate room where Armstrong himself once played. It’s sponsored by the organizers of the Louie Bluie Festival, held in Campbell County, near Armstrong’s childhood home, on Sept. 24. For more, see jubileearts.org and louiebluie.org.

Sept. 23 is Knox Heritage’s annual Scruffy City Soiree, an evening of dinner, music, and surprises, including satirical skits that are talked about for months to come, even by those who didn’t attend. The venue is the Standard on West Jackson, one of the more surprising and successful preservation projects of recent years. It’s a fundraiser, and the $125 tickets include dinner, wine or beer, and entertainment. For more, see knoxheritage.org.

Knoxville’s Latino pioneer, George Farragut, was born in Minorca, Spain, on Sept. 29, 1755. He came to America to fight the British. A friend of Governor Blount’s, he moved to Knoxville in the 1790s, but later moved to West Knox County, where he operated a ferry across the river. There his son, future U.S. Admiral David Glasgow Farragut, was born.