Some Reflections on the Mercury’s New Home - The Knoxville Mercury 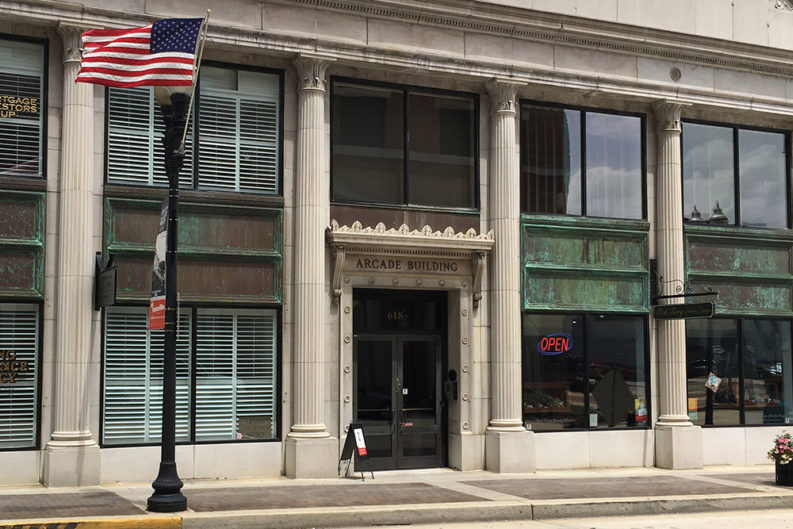 It’s gotten around that the Mercury moved its offices this summer. It’s not just any move. The Mercury has moved into the most historic journalistic building in town.

The Journal Arcade was built in 1924 for the old morning paper, the Knoxville Journal. Without rival the prettiest newspaper building ever seen in Knoxville, it’s a sort of moderne take on a neoclassical theme, designed by local architect R.F. Graf (1863-1940), about the same time he did the big Sterchi Building down the street.

We’re just dumb lucky it’s still there. It was an arcade, and still is. Walk in, and it smells agreeably like a barber shop. You’re not smelling the barber shop that was there 90 years ago. There’s a barber shop in here now. There’s a jeweler, and an insurance man, and a real-estate agency, the same kind of stuff that was here in the ’20s.

The Journal that built this building in 1924 was a different paper.

Its owner was Alfred F. Sanford, who was a local industrialist, invested in lots of factories. He was, at the same time he was planning this building, cultivating his Sanford Arboretum, an outdoor museum of native trees designed by the famous Olmsted Brothers. Located at the head of then-new Cherokee Boulevard, it was a wonder, and it’s now a legend. But it did not last much longer than Mr. Sanford did.

Sanford was also the kid brother of Edward Terry Sanford, a local guy who then happened to be a justice on the U.S. Supreme Court.

It was a Republican paper, all right, in the era of Coolidge and Hoover, but it was an even-tempered sort of daily. Its editor was that kind of guy. His name was William Rule and he was the most admired journalist in Knoxville history. When the Journal moved into this building, Rule was 85 years old and not about to retire. He didn’t even like to take vacations.

Once, he tried his hand as a bookseller. That lasted a few months. He was mayor a couple of times, but didn’t let it interfere with the more important work of daily journalism.

He was, for about 60 years, mentor to Adolph Ochs, his former assistant who became publisher of the New York Times. Ochs regarded Rule his “hero.”

The longest Rule ever left newspapers was to fight for the Union cause. The Civil War was maybe the closest Captain Rule ever came to taking a vacation.

The lifestyle suited him. By the time he moved into the Arcade, there were credible allegations that William Rule was the oldest active editor in America.

It didn’t seem so old to him. His wife of 70 years, Lucy, back home on Clinch Avenue near 16th, was a couple years older than he was.

He claimed he never attended social events except the ones in his house. Still, he kept up. There were new things daily in this marble building. The headquarters of the Knoxville Automobile Club was here, and the Girl Scouts’ “Jingo Shop,” where you could buy cookies year-round. Thompson Photo was in the front, selling home movie cameras, and projected movies in the show window, drawing big sidewalk crowds to gawk at films of Vol football games—in 1927, people on the sidewalk loved to see players running backwards—and Thompson’s hand-tinted color films of the Smoky Mountains, which most Knoxvillians had never seen up close.

The Civil War veteran, who wore a string tie and a gray van dyke and an expression of genial curiosity, surely paused to behold these wonders.

When he died of a ruptured appendix in July 1928, the 89-year-old editor had just written a positive assessment of the fresh Republican nominee, Mr. Herbert Hoover. If Rule was wrong about that, it was a rarity.

Others worked here in years to come. Don Whitehead, later a Pulitzer-winning war reporter, worked here in the 1930s. Alan Mims Thomason, later chief of United Press International, began his career in this building, as the Journal’s young city editor. Malcolm Miller, the English-born thespian who became the city’s best arts reporter of his era, dropped off his columns here.

And there was Miss Boyd. Her name was Sallie Boyd, but she was a strong-willed woman and preferred we call her Pattie. In the 1880s, she wasn’t allowed in the newsroom because of her extra X chromosome. She turned in her early stories via messenger. When she was an older woman, things were different, and this building was her work address. She was in charge of the society section, and a powerful personage.

Even back then, newspapers were labors of love. Before the competition of television, generations before the Internet, people relied on paper for most of their information about their community. Still, by 1936, the Journal was in receivership. They had to move into cheaper quarters, leaving behind the Journal Arcade.

After about eight years in cheaper quarters, the Journal somehow negotiated a return to the Arcade. When it did, it was a different sort of a paper, more conservative, and more aggressively political than it had been during Rule’s long tenure. In the early ’60s, the paper joined the News-Sentinel in a large, technically efficient building around the corner, in an odd joint-operating agreement, before finally closing up shop in 1992. By then, few remembered William Rule and the early days of the Arcade.

I’ve got my own office now, in another building, but I’m in the Arcade a few hours a week, when I’m going over proofs or meeting with the editors. It’s enough to get a bit of a charge from it.

And the old Arcade still looks new to me.