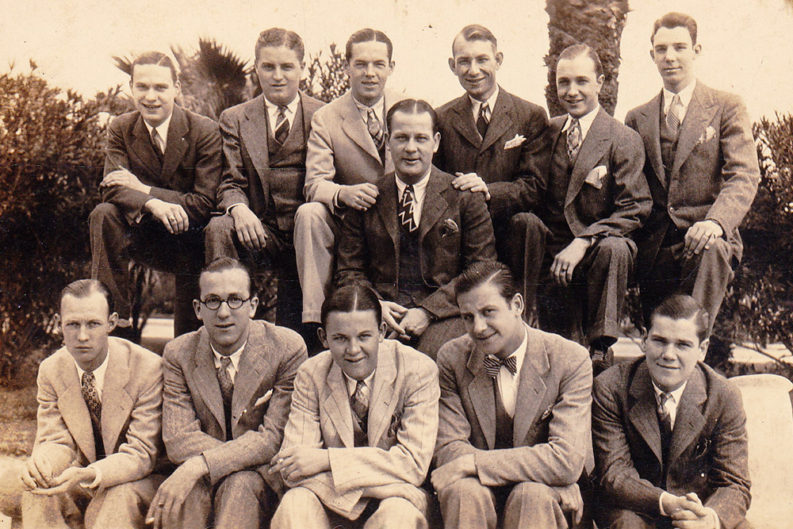 In my last column, I wrote about Reed Massengill’s discovery of a rare 16mm print of Clarence Brown’s 1925 silent film Smouldering Fires. When Massengill brought the print to the Tennessee Archive of Moving Image and Sound, he also brought another piece of local history: photographs from the 1930s of his mother’s first cousin, Horace Ogle, in the Carolina Club Orchestra. Ogle played trombone for the Chapel Hill-based group, which was the first assembled by bandleader Hal Kemp. (Kemp would be further connected to Knoxville when his band visited town in 1939 and met the authors of what would be one Kemp’s biggest hits, “Three Little Fishies.”)

Horace Ogle was born in 1908, a few months before his cousin Bernard “Barney” Ogle, who would turn out to be a highly regarded trumpet player. I called Barney’s daughter, Nancy Pooley, who lives in Virginia, to find out more about the musical family.

Barney’s parents, Sarah Williams and Pinkney Nelson “P.N.” Ogle, and Horace’s parents, Martha Williams and Simeon Ogle, were a pair of brothers and sisters. Pooley says oft-repeated family lore tells of friends and relatives making music at the log-cabin home of Gatlinburg settlers Martha Huskey Ogle and William Ogle. A photograph of P.N. playing bugle in the Army during the Spanish-American war survives.

Barney and Horace both went to Knoxville High School. In the evenings, they played music at nightclubs where, according to Pooley, they “acquired a generous taste for beer and were exposed to a faster breed of life than they normally would have been.” The cousins played with a variety of bands, including one led by pianist Fred Murff and violinist Harry Nides; Nides performed for both the Knoxville Symphony Orchestra and in country and jazz bands.

A pithy but colorful description of Gay Street in a 1925 News Sentinel column finds the Ogles downtown on what seems to have been an active Labor Day: “S.B. Luttrell at his office in the Bankers-Trust bldg even tho it is Labor Day. Barney and Horace Ogle, the horn blowers, going into Kuhlman’s… Craig the orchestra leader, all diked out in white… Rabbi Mark carrying an electric fan. White-robed K.K.K.’s stalking along as if very conscious of their appearance.” (Kuhlman’s was a drugstore, Rabbi Jerome Mark was the first resident rabbi of Temple Beth El, and Craig is likely Francis Craig, a Nashville-based bandleader who frequented Knoxville.)

Barney started dental school in Memphis in 1930. But his father, also a dentist, had invested with several other dentists and physicians in the new Medical Arts Building, and when the Depression hit, his money was tied up in the building’s construction. Barney’s income from home dried up. So he took to playing his trumpet in Memphis clubs, impressing fellow students by staying out all night and still passing his exams.

Barney returned to Knoxville to practice dentistry, eventually taking over his father’s corner office in the top floor of the Medical Arts Building. On P.N.’s advice, Barney gave up professional music, though he had the occasional brush with the industry, such as when Mother Maybelle Carter and her daughters sought his dental service when they were in town performing.

Horace, meanwhile, landed a gig with Maynard Baird, then the most popular bandleader in town. He probably played trombone on “Postage Stomp” and “I Can’t Stop Loving You” during Baird’s 1930 recordings for Brunswick Records’ Knoxville sessions. Later, he played with Tommy Dorsey’s band. In 1933, while on tour with Dorsey, he met his wife.

Horace played in the Army band after enlisting, but, according to his son, Simeon Seckbach, he stopped playing music professionally after a medical discharge in 1940. He died in 1955. Even though he had not performed publicly in Knoxville for almost two decades, the headline of his News Sentinel obituary reads, “Horace Ogle, Bandsman, Dies.”

The musical traditions of the Ogles live on. In the 1950s, Nancy Pooley was a member of the University of Tennessee Singers and also sang in Chucky Jack, a musical drama about John Sevier that was performed at the newly constructed Hunter Hills Theatre in Gatlinburg. There she met Archie Campbell, who invited her to perform on Country Playhouse, Knoxville’s first country-music television show. She even attended West High School with Don and Phil Everly, though she never sang with them.

Nancy’s son Wayne Pooley has been Bruce Hornsby’s audio engineer for many years. Hornsby gave Wayne the piano he played while touring with the Grateful Dead in the late 1980s and early ’90s. It’s now at Nancy’s home. It’s a little worn on the outside, but it’s well-preserved where it counts.

“I wish that thing could talk,” she says.